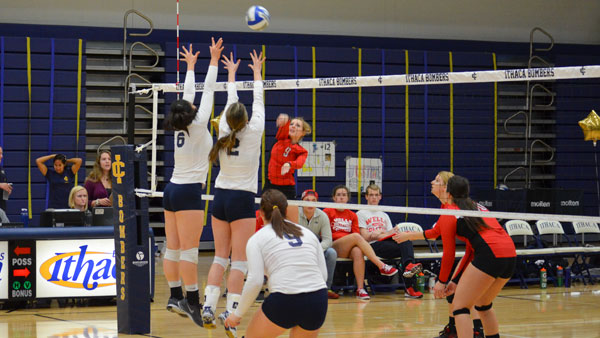 As head volleyball coach Janet Donovan stepped onto the bus to join her team, she knew what she wanted to accomplish during the next three games. With an Empire 8 conference record of 2–2, the Bombers were still in contention for a playoff bid as they left for the Crossover Tournament at Nazareth College on Oct. 25.

Their next three games were all in-conference games. With their season on the line, the Blue and Gold were motivated to play well and keep their playoff hopes alive.

Donovan said, though she attempted to keep the team level-headed about the next few games, the players were anxious to play their best and finish their conference games strong.

“We try to approach everything the same way, but the kids know if we do well in conference and we play well, we can make the top four in the E8 championship,” she said. “If we do that, we extend our season another weekend, and we have a shot to go to the NCAAs — which is always our goal.”

“Those games are still like every other game, but they definitely have an extra cherry on top,” she said. “They definitely give us extra motivation.”

The Bombers were tested as starting freshman middle Breanne Tuohy was sidelined with a sprained left ankle for the tournament. Freshman Siobhan Sorensen, a 6-foot-1-inch middle, filled in for Tuohy and tallied 12 blocks, 21 assists and six kills over three games.

Freshman outside hitter Shaelynn Schmidt also helped fill the gap caused by Tuohy’s injury, as she led the team in scoring with 43 points during the tournament. She also has the most team kills with 328 this season. She posted a personal best in the match against St. John’s Fisher College in which she posted 24 kills in the Bombers’ five-set win. The team would split its next two games with a win against Alfred University 3–0 and a 0–3 loss to Elmira College.

The South Hill squad improved to 4–3 in conference play, and it has moved up to grab the fourth spot for the Empire 8 championship tournament.

The Bombers are now set to contend in the Empire 8 playoffs, and they have won six of their last nine matches.

Brown said since the beginning of the season the team’s chemistry has grown, which has fueled its recent winning streak.

“We all started out as just 13 girls who just had a common interest in volleyball, and now we’re always together. We always hang out,” she said. “We’re becoming more of a family — like sisters.”

The team starts five freshmen and is the only team to do so in the conference, Donovan said. Schmidt said the time the team has spent together has helped it develop and achieve a common goal.

“We’re all connecting a lot better than we were at the beginning of the season,” she said. “It was difficult because basically five freshmen at least are starting at a time, so it was really hard to connect with brand new people all at once. I think we’ve done a good job with our chemistry, and if we keep working on it we could be really, really good.”