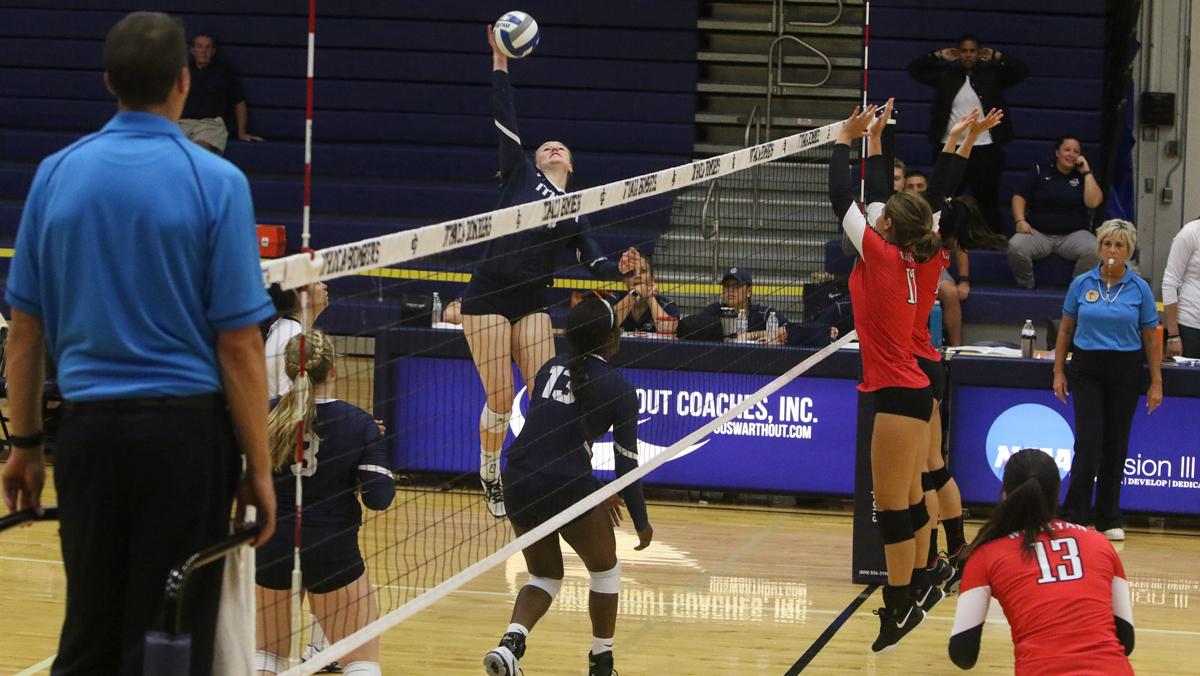 The Ithaca College women’s volleyball team faced SUNY Geneseo and Wesleyan University on Sept. 7. The Bombers swept both the Knights and the Cardinals 3–0. Head coach Johan Dulfer wanted to make sure that the players played their best no matter who was playing, and said that the team’s serving made a big difference.

“I expect three good teams this weekend,” Dulfer said. “It was a lesson that we learned from last year.”

In the first set, the Bombers got a early 11–9 lead, but they never underestimated the Knights. The girls played smart and positive. Both teams stayed competitive, but the Knights were no match for the Bombers.

In the second set, the Knights took an early 7–6 led, but without any hesitation from the Blue and Gold, the team called each ball and played united. The girls caught up quickly, making the score 13–13. In the second match alone, junior setter Caitlyn Floyd had 12 assists. She set sophomore outside hitter Reagan Stone and senior outside/middle hitter Katie Evans for the kills. After that, the Bombers took control of the game and finished the game 25–19.

Heading into the third set, the Bombers started out strong. The Knights did not get discouraged by this, because in no time they tied the score to 12–12. Even with the timeout called by the Knights, the Bombers used that time to encourage and engage with each other, talk about what happens on the court, and how to win this last set. Yet again, out on top, the Blue and Gold defeated the Knights, 25–17.

The team played as best they could without their middle hitter Amanda Cerruti, who is currently injured.

“I hope she’ll be back soon,” Dulfer said. “In the meantime, other girls will have to step up, like on any other team.”

In the next match against Wesleyan, the South Hill squad took control in the middle of the first set, as they were able to go on a 5–0 run to give them a 24–18 lead, and eventually took the set 25–20. The second set was all Bombers, as Evans and Stone each dominated, which led to a 25–15 win.

The Blue and Gold continued more of the same in the third set, as freshman outside hitter Alison Lipton carried the team with four kills, bringing her total to 12 on the night. The Bombers took the set 25–19.

Floyd was pleased with how well the South Hill squad played.

“We have a deep team,” Floyd said. “It was nice to be able showcase that. We have a younger middle that can fill in;  it was great to get them in and get them some experience.”

The South Hill squad will return to action again at 4 p.m. Sept. 8 in the Ben Light Gymnasium against Susquehanna University.