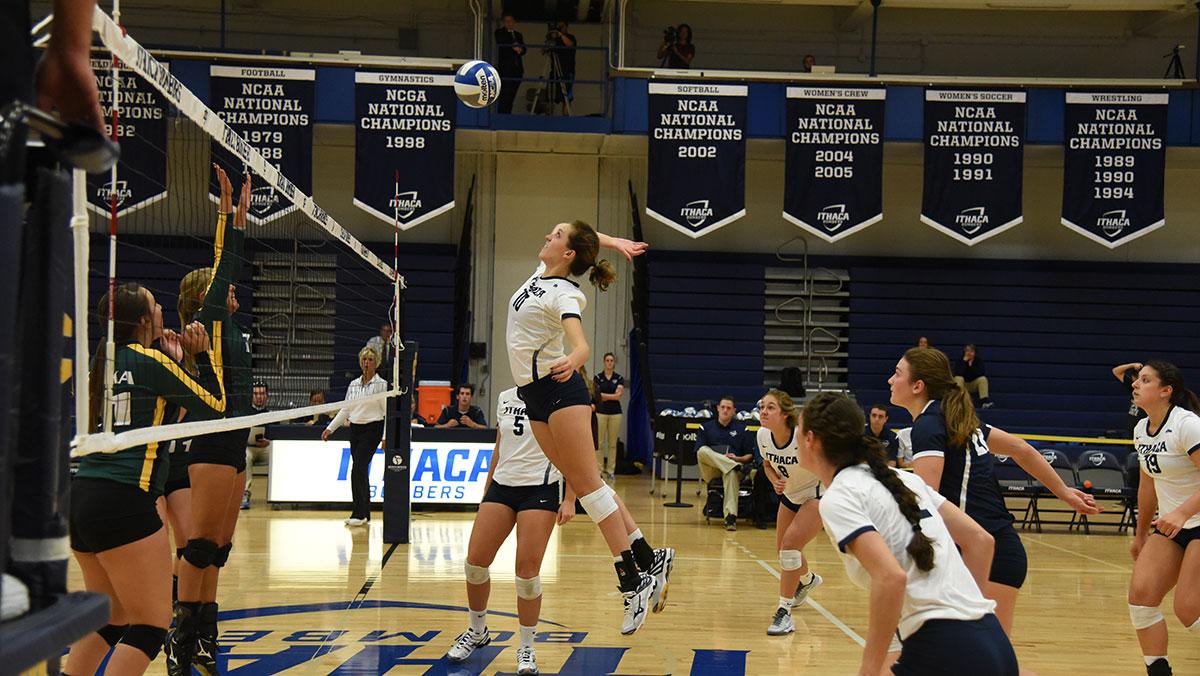 Jennifer Williams/The Ithacan
Freshman middle Katie Evans goes in for a kill during the volleyball team's 3–0 win over Keuka College on Sept. 23 at Ben Light Gymnasium. The ninth consecutive win moves the Bombers to 13–1 overall on the season.
By Katie Callahan — Contributing Writer
Published: September 25, 2015

The volleyball team earned another sweep on the year, beating Keuka College 3–0 in a nonconference match Sept. 23. The ninth consecutive win moves the Bombers to 13–1 overall on the season.

The Blue and Gold beat the Wolfpack 25–13, 25–19 and 25–12. The Bombers did not trail for a single point in the first and third sets of the match, and they only found themselves down a single point once in the second set.

In the contest, the South Hill squad hit .284 as a team collecting 27 kills over the course of the three sets, while Keuka was only able to collect 24 kills on a -.031 hitting percentage. Assistant coach Derryk WIlliams said he was thrilled for the team picking up the win and improving its overall record.

“Moving forward, we are really excited about where this team can go,” Williams said. “The sky really is the limit with this team.”

Sophomore captain Joelle Goldstein led the Bombers’ offense with a .615 attacking percentage, racking up eight kills. Goldstein said it was the team’s determination that allowed the Bombers to come out on top.

“We came out with a lot of intensity and a lot of focus, and we did what we had to do,” Goldstein said. “The biggest key to our success is coming out focused, ready to play and knowing what we have to do.”

She also put up a strong defensive effort, collecting a team-high 10 digs, and also two blocks on the night. Rounding out the top performers on the South Hill squad’s offense was freshman Katie Evans, who picked up five kills on the night to go along with three blocks and two digs.

Fellow sophomore captain Kayla Gromen led the Bombers service, finishing with four aces. The first set began with Gromen serving five straight points against the Wolfpack before Keuka decided to try to ice her serve with a timeout. Gromen began the third set serving another five straight points to start the set.

Gromen, who finished the night with 19 assists and nine digs, said her serving game is one of her strongest assets.

“It was fun,” Gromen said. “They were giving away free T-shirts [for every ace], so I thought I would try to get people some shirts. Serving is one of my favorite parts of the game.”

Freshman Kyle Dandrea was also strong behind the service line for the Bombers, collecting three aces. Senior captain Dylan Gawinski-Stern provided nine digs to round out the Bombers defense.