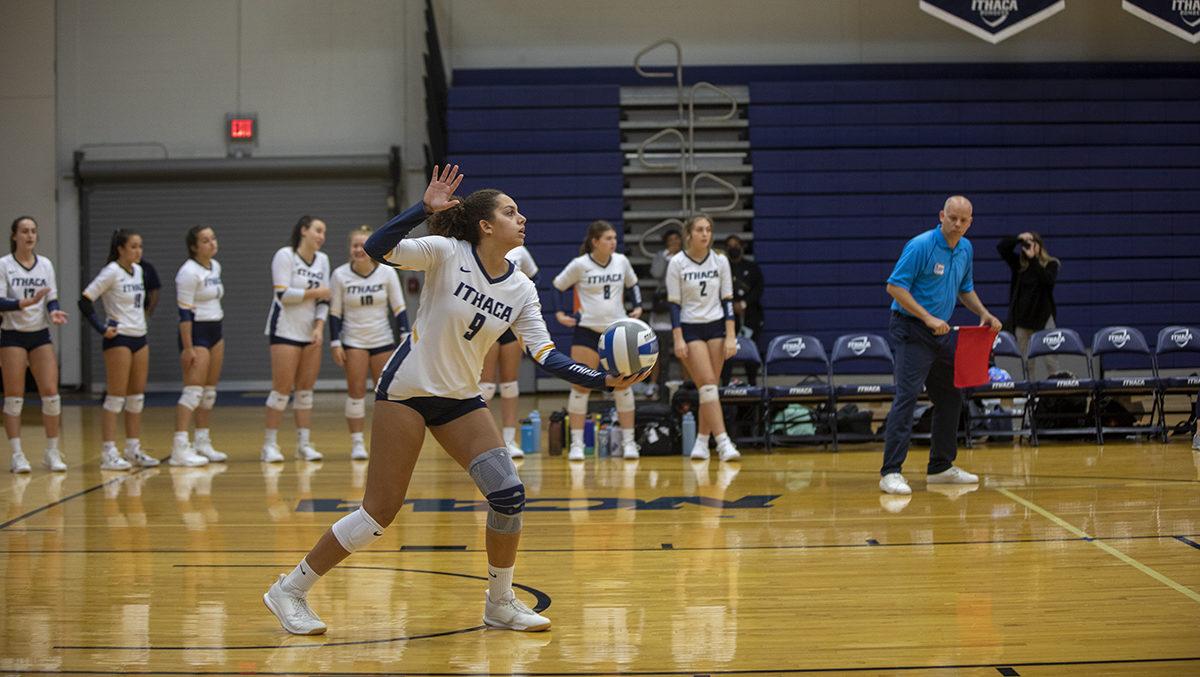 The Ithaca College volleyball team led for nearly the entire match in a 3–0 sweep over the Rochester Institute of Technology Tigers to open Liberty League play.

The first set started out well for the Bombers, who took an 8–3 lead before RIT called an early timeout. The break in the action could not slow down the South Hill squad though, with RIT managing just eight points the rest of the set to give the Bombers a 25–11 victory in set one.

The second set also saw a strong Bomber start, jumping out to a 6–1 lead. But an RIT timeout swung the momentum in the Tigers’ favor, and they fought back to tie it at 13. Neither team could get much going after that, as the Bombers would win a few points, only for the Tigers to tie it back up again.

The Tigers took their first lead of the game late in the second set, 20–19, but the Bombers stayed in it, eventually scraping out a 25–23 win. The Bombers looked sloppy through most of the set, tallying four service errors in the set alone.

But to say the Bombers bounced back from the tough second set would be an understatement. They jumped out to a 5–0 lead before the Tigers burned another early timeout. The break in the action, though, would not prove to make much of a difference, as the Bombers would extend their lead to 14–0 before conceding the first point of the set. It was easy running for the South Hill squad from there, taking the final set 25–9 to win their seventh straight match.

Pitts said after the game that the team knew it had to rally after the difficult second set. She said that the set was not the team’s cleanest, but that it was good to see how it responded.

“We just came together and realized where we were making mistakes, and just tried to clean it up,” Pitts said. “We really rely on each other and rely on the person next to us. I think that’s what brought us back up in the third set there. We were able to capitalize on our strengths and kind of minimize our mistakes.”

As for starting off conference play with a win, Pitts said this was the best-case scenario for a team looking to make it back to the postseason.

“I can’t think of a better way [to start conference play] than a 3–0 win over one of our rivals,” Pitts said. “Super perfect, super happy.”

The Bombers are back in action Oct. 1 when they travel to both SUNY Brockport for an 11 a.m. match and Nazareth College for a 2 p.m. match.