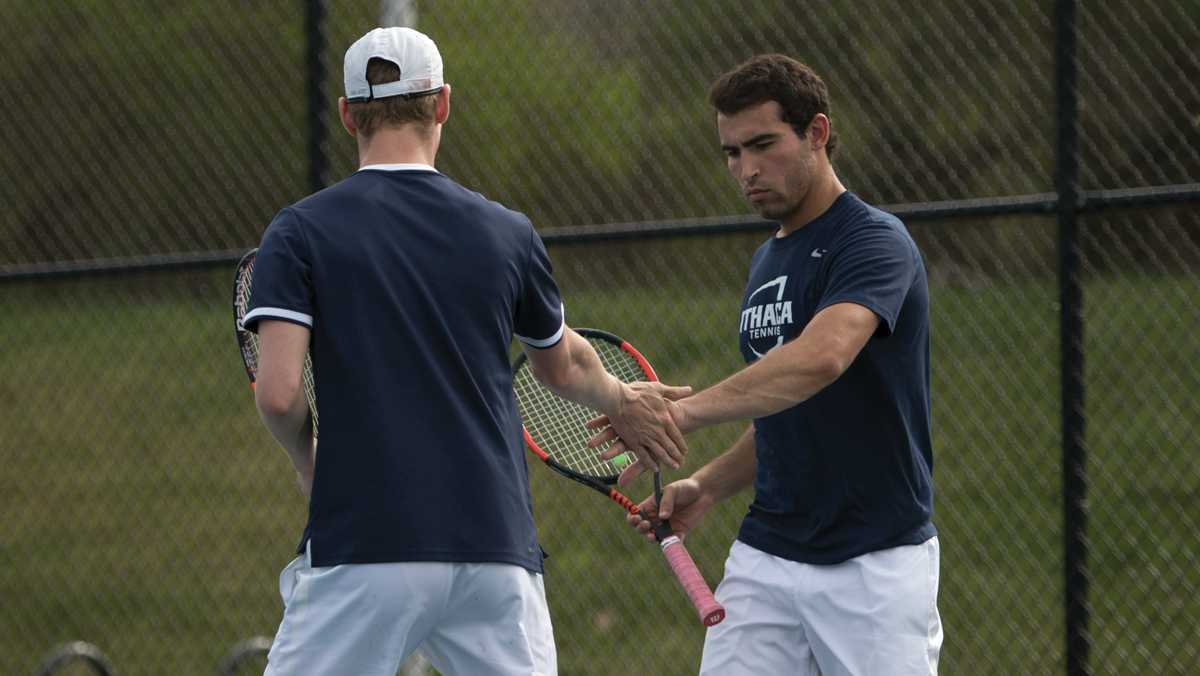 When senior Lorenzo Viguie-Ramos visits his grandparents at their beach house in Bethany Beach, Delaware, he reminisces while looking at the pictures of himself and his grandfather Rudy Viguie playing tennis near the beach.

“My grandfather had his old-fashioned Adidas t-shirt on, his sun hat, high socks and a bathing suit, and I’m like this 2-foot-4 kid, holding the racquet like a baseball bat and my swim trunks on with no shirt and just swinging at the ball,” he said.

Since the age of four, Viguie-Ramos played tennis every day after school with Rudy. The two of them no longer play together due to Rudy’s age, but he comes to Viguie-Ramos’ matches in Delaware.

After a major injury in high school and transferring colleges after one semester, Viguie-Ramos found Ithaca College and its tennis program. He is now the sole senior and captain of the team.

Growing up, Viguie-Ramos also played football, basketball and little league baseball. His goal was to play football in college, but he was told he was not big enough to play at the college level, and during his senior high school season he tore his rotator cuff.

“That was a huge setback for me,” Viguie-Ramos said. “Let alone the surgery part of it — I don’t like surgery. I don’t like blood. I don’t like any of that stuff — but I was recuperating for seven months. So during that time I wasn’t doing anything.  I missed my basketball season.”

After recovering from his surgery, Viguie-Ramos started his freshman tennis season at Chestnut Hill College in Philadelphia, Pennsylvania, where he was in the pre-dentistry program.

His interest in dentistry came from his dad, who was a dentist.

“I would visit him at work and I would enjoy the atmosphere, and I liked the people he worked with,” Viguie-Ramos said. “It just seemed like a fun job and a homey place.”

He soon discovered that dentistry was not for him. Viguie-Ramos decided to transfer to Ithaca and major in business administration with a marketing concentration.

After deciding to transfer, he reached out to Bill Austin, head coach of men’s tennis, in November 2014. At the beginning of the spring semester, Viguie-Ramos went to a practice to have an informal tryout where he hit balls with the team.

“I wasn’t intimidated,” he said. “I was nervous, but nervous about meshing with the other guys and making sure my presence would be appreciated.”

Viguie-Ramos said the team was very helpful his first few weeks on campus by showing him where classes were and where to eat on campus, on the Commons and at local restaurants.

During his freshman year, he played his doubles matches with Chris Hayes ’16, who is now the assistant coach.

“He always brought a lot of energy to the team,” Hayes said. “He is a really good person to have on the team because he will always have your back no matter what. It’s more than tennis for him — it’s brothers and sisters.”

When he first came to the college, he said he was a little taken back by the amount of yelling his teammates did at themselves during matches. After seeing the impact it had on his teammates, he decided to try it during practice and then during a match against St. Lawrence University in February 2015.

“I was screaming so loud and so was everyone else,” he said. “We ended up winning that match and that was my first singles career win here at Ithaca. Since then I thought, ‘maybe this is the key to winning.’ I’ve been able to pick myself up and come back and win. And sometimes you just get beat and you did what you could.”

Now that Viguie-Ramos is the only senior and captain on the team, he said that he is figuring out his own leadership style but is also drawing from what Hayes did with the team when he was the only senior.

“If you are getting beat up bad, I would rather see you smile and cheer on your teammates and being upbeat and not getting down on yourself or your teammates, because it brings the morale down,” Viguie-Ramos said. “I try to tell the guys every practice to stay positive, stay consistent and just be happy.”

Over the past four years, Austin said he has seen Viguie-Ramos’ footwork improve drastically, which has helped him in both doubles and singles play.

“His footwork was always the bane of his existence,” Austin said. “He is paying more and more attention to it. I think when he’s fitter and his footwork is good, it allows him to be that much more creative on the court. And he is a very creative tennis player.”

This season, Viguie-Ramos will be playing doubles with junior Sam McGrath.

“Playing alongside of him, he’s just a fighter,” McGrath said. “When he is put in tough situations, he is able to come out of it.”

Viguie-Ramos said his favorite part about playing tennis is the amount of energy the team brings to each match.

“We really know how to show that we want to win,” he said. “That is my favorite thing. I love that my team is able to scream for my teammates. I love my team and I love how enthusiastic they are.”

After graduation, Viguie-Ramos will be starting his career at Northwestern Mutual in New York City as a financial adviser.

“When I found out about advising and learning, what it actually is, it’s right down my alley,” he said. “I’m meeting lots of new people and building relationships with clients — that’s what I want to do. I want to help people reach their financial goal.”