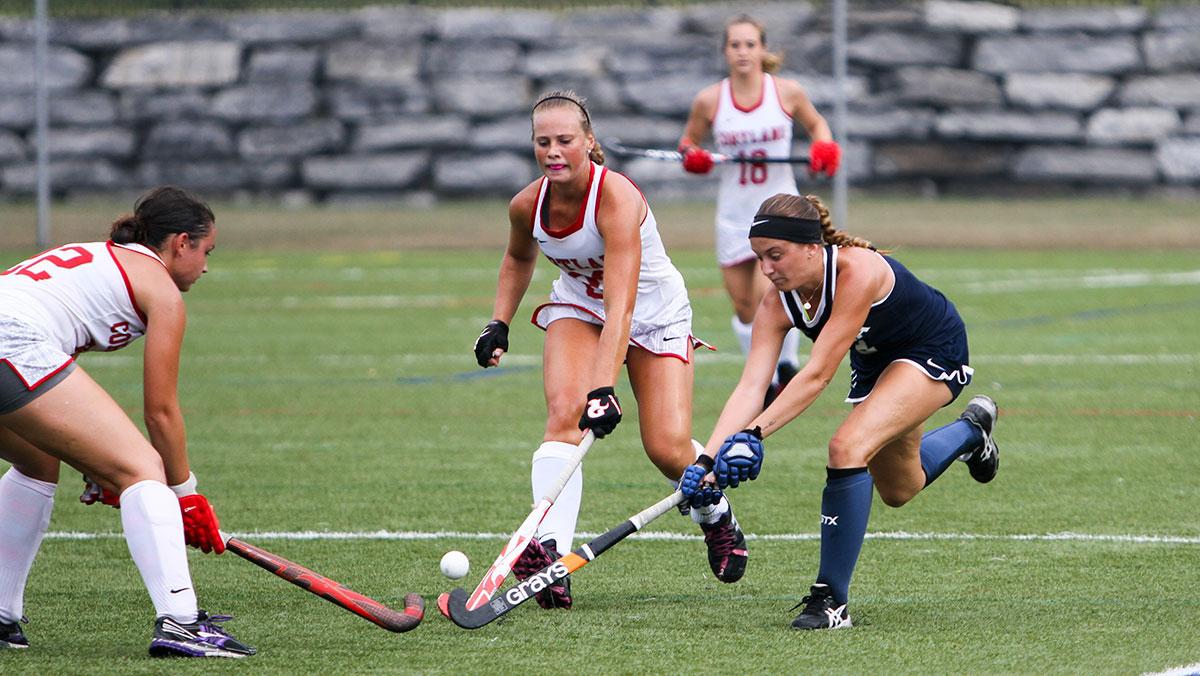 Coming off a tough 1–0 overtime loss to SUNY Cortland on Sept. 9, the field hockey team returned to the field Sept. 12, looking to open its Empire 8 conference schedule with a 4–0 win against Washington and Jefferson College.

After a tightly contested first half, in which neither team found the back of the net, the Bombers bombarded the Presidents with an offensive explosion in the second-half. Junior forward Colleen Keegan-Twombly got the show started with her second goal of the season, an unassisted tally at the 14 minute mark of the second period.

Following a timeout by the Presidents, Ithaca would get its next goal from sophomore forward Michaela Donohue nearly 10 minutes later, with the Massachusetts native posting her second goal of the season off an assist from junior forward Cassie Schuttrumpf.

The Bombers used some heavy offensive pressure to further expand on their lead. Sophomore forward Amanda Schell was awarded a penalty corner with 6:30 left in the game. The Amesbury, Massachusetts, native fed the ball to Schuttrumpf, who fired a shot that was blocked on its way to the net. The ball then found its way to Donohue, who fed Keegan-Twombly for her second of the game and third of the season, making the score 3–0 in favor of the Bombers.

Two minutes later, the Blue and Gold would put a nice bow on things as Schell once again started the offensive attack. Off a penalty corner, Schell fed senior back Caitlin O’Brien, who had her shot saved by Washington and Jefferson’s senior goalie Morgan Brozena. The rebound of O’Brien’s shot found the stick of Keegan-Twombly, who was searching for her third goal of the contest, but Brozena denied her the hat-trick. Eventually, Schuttrumpf would register her second goal of the season off a Schell pass, giving the Bombers the 4–0 advantage.

Junior goalie Katie Lass picked up her first shutout of the season, and her eighth as a Bomber. Keegan-Twombly’s two goals on the day makes her the leader for the Bombers in goals and points with totals of three and seven, respectively. With the win, the Bombers improve to 3–1 overall and 1–0 in Empire 8 play. The Presidents fell to 2–2, with a 0–1 conference record.

The Bombers return home to Higgins Stadium on Sept. 16, against the University of Rochester at 4 p.m.

The men’s and women’s cross-country teams competed in the first scoring invitational of the year, the Rensselaer Polytechnic Institute Invitational, on Sept. 12 in Saratoga Springs, New York.

On the men’s side, two runners placed in the top 20, including senior Sawyer Hitchcock, who crossed the finish line at 19:22.7 for sixth place overall. He missed first place by 28.3 seconds, after winning the Jannette Bonrouhi-Zakaim Alumni Race on Sept. 5. Sophomore Tim Chappell was the second runner, placing 19th with a time of 19:38.9. Both of these runners had a mile pace of under 5:30 with Hitchcock finishing with a mile pace of 5:12.

The Bombers will look to continue their dominance at the Rochester Yellowjacket invitational on Sept. 19 in Rochester, New York.

Coming off an impressive 9–0 win against Utica College on Sept. 5, the women’s tennis team improved to 2–0 on the season by defeating the St. John Fisher College Cardinals 8–1 in Rochester, New York, on Sept. 12.

The Bombers started the day off by winning first and second doubles, but dropped their first match of the season at third doubles. Junior Maddie Overholt and freshman Taylor Ginestro fought hard before eventually losing their match 8–3.

The rest of the Blue and Gold cruised to victory, though.  In first doubles, junior Haley Kusak and senior Marni Blumenthal continued their impressive start to the season by winning 8–1. The duo is now 2–0 on the season at first doubles play.

The two also looked sharp during singles play, as Dunn earned a 6–1, 6–1 victory at second singles, while Ginster stifled her opponent 6–0, 6–0 at fourth singles.

The South Hill squad veterans wouldn’t let the freshmen steal the show, however.

The rest of the team also dominated in singles play, winning each of the six matches. Kusak was victorious in her singles debut this season, earning a 6–0, 6–1 victory at first singles.

The Blue and Gold played very well throughout the day, but two highly touted freshmen were missing from the lineup.

After earning a 6–2, 6–0 win in her first career match at first singles against Utica College, freshman McKinleigh Lair did not play this week. Fellow freshman Willow Day has yet to make her debut for the Bombers this season.

However, the Bombers have looked sharp with any combination of players in their first two matches of the season, and will look to improve to 3–0 on the season and in Empire 8 play on Sept. 14 when Nazareth College visits South Hill at the Wheeler Tennis Courts.