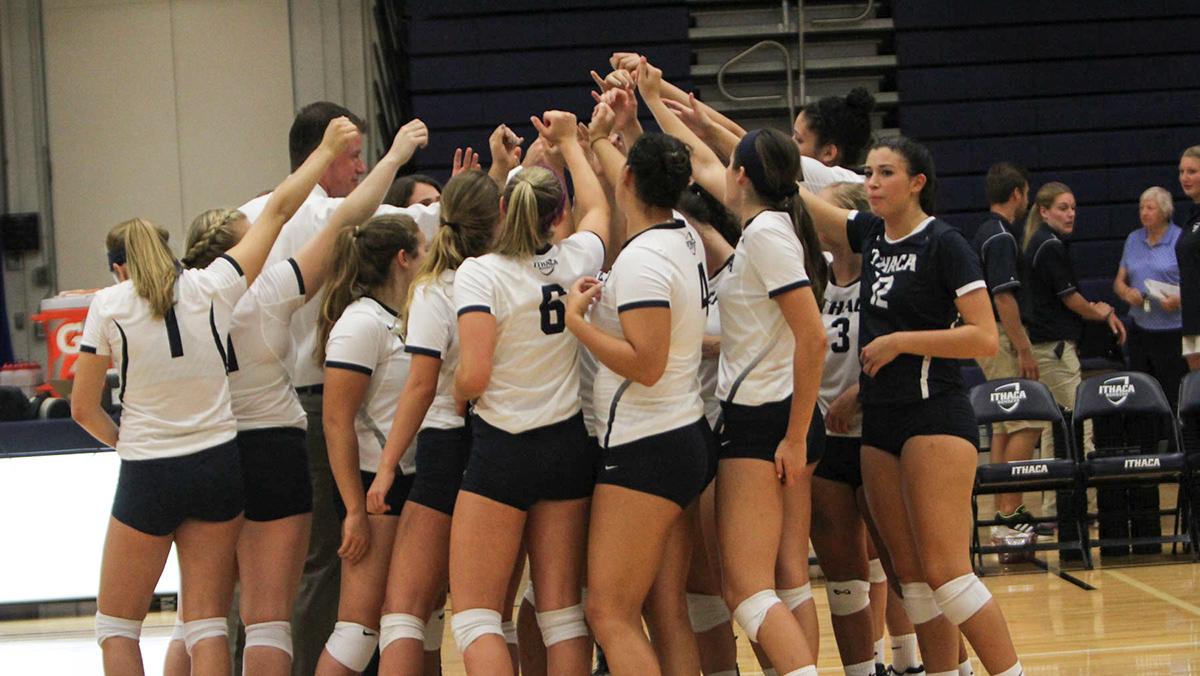 CAITIE IHRIG/THE ITHACAN
The volleyball team huddles before its game Sept. 6 in Ben Light Gymnasium. The Bombers will play in the Buttermaker Tournament Sept. 9–10 against the University of Scranton, Desales University, Muhlenberg College and Cabrini University.
By Maddison Murnane — Staff Writer
Published: September 8, 2016

The volleyball team will kick off the weekend with the two-day Buttermaker Tournament at 3 p.m. on Sept. 9 against the University of Scranton Royals in Allentown, Pennsylvania. Following this match, they will play at 5 p.m. on the same day against the DeSales University Bulldogs. The following day, the Bombers will take on the Muhlenberg College Mules at 10 a.m. The team will finish the weekend with a matchup against Cabrini University at noon the same day.

With their first home game of the season, the women’s field hockey team will take on the Utica College Pioneers. This match against the Pioneers will be the Bombers’ first Empire 8 Conference game of the season. Last year, the Blue and Gold were able to defeat Utica 2–1. The team will look to senior forward Colleen Keegan-Twombly to continue finding the back of the net.

Coming off strong seasons last fall, both the men’s and women’s cross–country teams will participate in the Hamilton College Short Course Invite. This will be the first official race of the season for both teams.

After losing in the Empire 8 Championship to the Stevens Institute of Technology Ducks last season for the seventh consecutive year, the men’s tennis team look to defeat the Ducks this year. They open up their year with the St. Lawrence Fall Classic.

The women’s tennis team will also compete this weekend as they participate in the Mary Hosking Invitational.