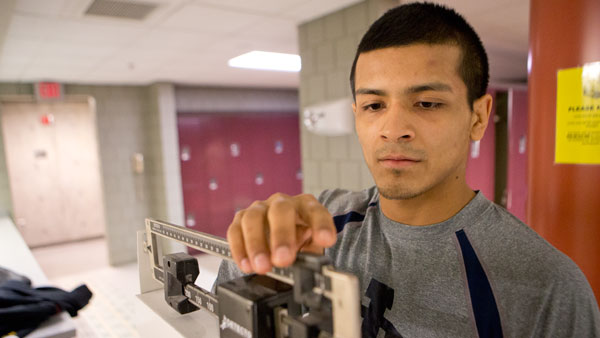 Alex Gomez wakes up on Tuesday morning with his muscles aching. He lifts himself from his bed and walks to the scale, his quads throbbing with each step. It reads 138 pounds. He is 5 pounds overweight.

Gomez wrestles in the Division III 133-pound weight class, and in three days he will need to reach that mark at his weigh-in to be eligible to compete.

Weight management for collegiate wrestlers requires constant effort, Gomez said. For weekly weigh-ins, wrestlers have to to drink gallons of water each day, exercise constantly and watch the scale, all while preparing to wrestle their upcoming opponents. The wrestling lifestyle is taxing on the human body because of constant weight fluctuations.

For Gomez, breakfast consists of egg whites, fruit and a cup of water. Gomez said hydration is key, especially when he loses about 5 pounds of sweat in practice each day. After breakfast, he goes to class from 9:25–10:40 a.m. and then fits in a weightlifting workout before noon. Gomez said it is important to work out earlier in the day so his muscles have enough time to rebuild.

“[I workout] whenever I can fit it in my schedule,” he said. “I usually try to get it in before 12 o’clock so my body gets healed up before practice at around 4 o’clock.”

Gomez said Division III athletes are required to take care of their bodies on their own. As a result, trainers and coaches do not provide personal workout schedules or diet plans for players during the season. Gomez said he exercises at the Fitness Center on campus every day on top of competitive practices, alternating between upper and lower body work.

Gomez said his brother Ricardo taught him the importance of keeping a strong mindset in a sport that puts considerable stress on an athlete’s body. Ricardo, who is three years older than Alex, represented the Bombers as the Division III wrestling champion last March before he graduated.

“It’s a long season, so it’s going to be draining once and a while,” Gomez said. “I don’t think any sport does that — constantly losing weight — dropping, gaining, losing.”

Gomez said it is important to replenish the body’s supply of water after losing weight from perspiration during workouts. On top of personal workouts, the team’s daily practices leave him 5 pounds lighter than he was just two hours prior.

Keeping an active metabolism helps the body shed fat and maintain its physical peak. Head coach Marty Nichols said workouts, nutrition and hydration create a continuous cycle that allows the body to burn calories around the clock. Every time wrestlers lose water during exercise, they gain it back while periodically drinking liquids during the day. Wrestlers who have their body’s tuned and their metabolism working often wake up lighter than when they went to bed because their body is in a constant state of activity.

Originally a basketball player, Gomez switched to wrestling in fifth grade after seeing Ricardo compete and win his matches. Gomez said growing up with an older brother involved in wrestling was crucial to his development. Their father bought them a mat to practice on, and Gomez said he spent hours there wrestling his older brother.

“We would go home after school and just practice every day,” he said. “He was much older than me, and he had more experience in the sport. Ricardo was on the varsity wrestling team as an eighth grader, and he taught me everything he knew. He would beat up on me, and that made me a lot better.”

At the beginning of the season, Gomez was assigned to a weight class that he must maintain throughout the season to be eligible for matches. But Gomez said the current NCAA regulations prohibit athletes from rapidly losing large amounts of weight that could put them in danger. The regulations also do not permit athletes to go below 5 percent body fat, and they are only allowed to lose 1.5 percent of their total weight per week to remain eligible to compete in matches.

Gomez said the hardest stretch of the season, which began in November and will end in March, is during winter break because wrestlers tend to gain weight while at home over the holidays. Last year, Alex and Ricardo both struggled maintaining their weight during that time because they couldn’t resist their mom’s home cooking.

When wrestlers are above their weight limit before a match, they need to lose weight rapidly — commonly referred to as cutting. The more they have to cut, the more the body is strained. There are various ways to cut weight, including excessive sweating, starvation and increased workout durations. Extreme cutting is a taboo practice in the wrestling world because of the stress it puts on the human body. Gomez said it is not uncommon for wrestlers to be between 5 and 10 pounds overweight the week before they weigh-in.

Marc Israel ’05, assistant wrestling coach, said he often receives questions from players about what to eat and how to train.

“What I tell them is that they have to do this in a healthy manner,” he said. “We want to always protect their safety, and their health comes first. We would never ask someone to lose weight to make a team or do anything like that. We just want them to be competitive, enjoy the sport and be healthy.”

The horror stories of wrestlers going to extremes at the collegiate level are a thing of the past for the most part, Gomez and Nichols said. Wrestlers no longer starve themselves or work out to the point of dehydration. In fact, Nichols asks his team to carry around gallon jugs of water with them during the day to stay hydrated. Gomez said that the old way of cutting weight is outdated and dangerous.

“Nowadays, we have a new system where we have certifications where they pinch your body fat to see how low you go,” he said. “It’s not like back in the day. They used to do crazy stuff like go in a sauna. It’s not as big now.”

As a former wrestler, Israel said training doesn’t stop when practice or the season ends, making it one of the most challenging sports to maintain physical stability. Wrestlers can never let up or take time off because they would risk falling out of sync with their eating and workout schedules.

“I would certainly say it is one of the most demanding sports because you do have different components to it,” he said. “You have to make a certain weight, and then you have to go out there and compete. So you have to be in your peak physical condition throughout the year.”

Nichols said he emphasises to his 35 wrestlers that putting physical stress on the body year-round makes it stronger.

“In order to get really fit and train, you have got to change your workouts up,” he said. “You have to do something totally different that shocks your system that you aren’t used to doing. So you’re always tweaking things and changing things to reach that next fitness level.”

Nichols defended his approach of letting players take the initiative when it comes to supplemental training and nutrition. He said wrestlers need to commit to an entire lifestyle change to succeed in collegiate wrestling.

“You have to educate everybody, obviously,” he said. “We talk to players about nutrition, and we do all different kinds of workouts — crossfit training, running, wrestling, weightlifting — all kinds of things, just so they have a good idea of different workouts and how to stay in shape.”

After a full day of classes and workouts, Gomez typically gets out of his team’s two-hour practice drenched in sweat. He feels sore and takes an ice bath in the Hill Center training room to take the edge off before a hot shower. The heat of the steaming shower offsets the frigid ice water bath that dulls the pain of his aching muscles. But he is 5 pounds lighter than when he woke up in the morning.

When he feels the pain the morning after another long day of rigorous training and exercise, Gomez said he remembers what his brother taught him about work ethic.

“He taught me to always stay positive, strong and keep working hard,” he said. “The workouts are intense, so it is very easy to quit over the last 10 years that I’ve been wrestling. My brother always told me to be a leader and to have a strong mindset.”