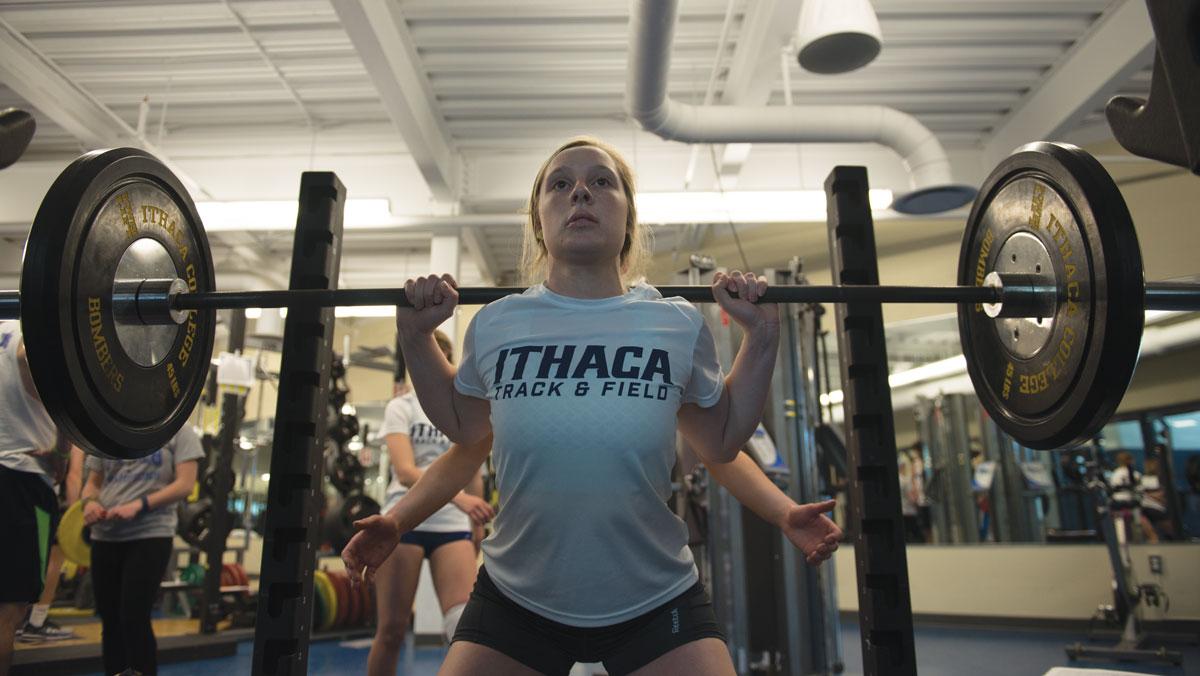 Two days a week, the Ithaca College men’s and women’s track and field teams work out in the weight room. The weight room at the Athletics and Events Center, which is in between the track and the athletic training room, houses weights and pieces of equipment that enable the team to get stronger and perform better.

Caitlin Finn, a certified strength and conditioning coach, began working with the track and field teams in August 2014. Since then, she has continued to make significant changes to the weight program. The team now has exercises with a specific focus on a card that individuals use to keep track of what they are doing and how much weight they are using.

Senior captain Aaron Matthias, a sprinter and jumper, said that in the past, the teams’ weightlifting coach did not have a background of weight training and did not know how to run a lift practice. They did not give specific exercises, and the time the teams spent in the weight room became a free-for-all.

Matthias said many of the athletes did not take weight training seriously but that the program is completely different now from how it was his freshman year because there is a focus on specific exercises and the number of repetitions that are done within them.

“When I was a freshman, we kind of just had the grad assistants helping out in there,” he said. “In the past two years, when we got Cait coming in and being a certified strength and conditioning coach, it’s really restructured the way we’ve been doing it.”

Senior Sarah Werner, a sprinter, said sprinters lift heavier weight because they want to be explosive, and heavier weight training gives them more strength. Distance runners do not want as much bulk, so they do lighter weights and often more repetitions for strength and endurance.

“Sprints and jumps are kind of together, throwers are separate, even pole vaulters have a little bit different variety in their training, and the distance runners also lift differently,” she said.

All team members get a lift card that lists the exercises they do, along with the number of repetitions and the number of times they are supposed to go through each set.

Senior captain Alex Rechen, a pole vaulter, said that in the past, people would do what they wanted in the weight room and that no one really paid attention to what they were doing. “There was no monitoring of what weights we were doing or anything like that,” Rechen said. “I was actually only one of like two people who actually wrote things down and kept track of it.”

Finn said her main focuses for her athletes are looking at their evolution, getting stronger, improving their overall body health and staying injury-free by practicing correct technique. With this, she said, comes better performances.

“The general theme is that there have been improvements,” Finn said. “We are continuing to meet goals we have in years past and create new goals.”

Even though sprinters, distance runners, throwers and jumpers may have different focuses within each exercise, they still perform many of the same exercises, such as front squats and back squats, which keeps the team on the same page.

“They all work with within the same program for track and field,” Finn said.

Typically, the team works out in the weight room two days a week, but from August through December they will work out three days a week. Matthias said thanks to Prottas-Finn, the team is stronger than ever.

“I really think that what we’ve been doing as a team lately has been extremely beneficial to us,” Matthias said. “We’re the closest that the team has ever been. I think that having Cait work with us very closely has been a huge benefit because it’s allowing us to push toward this goal as a whole team.”