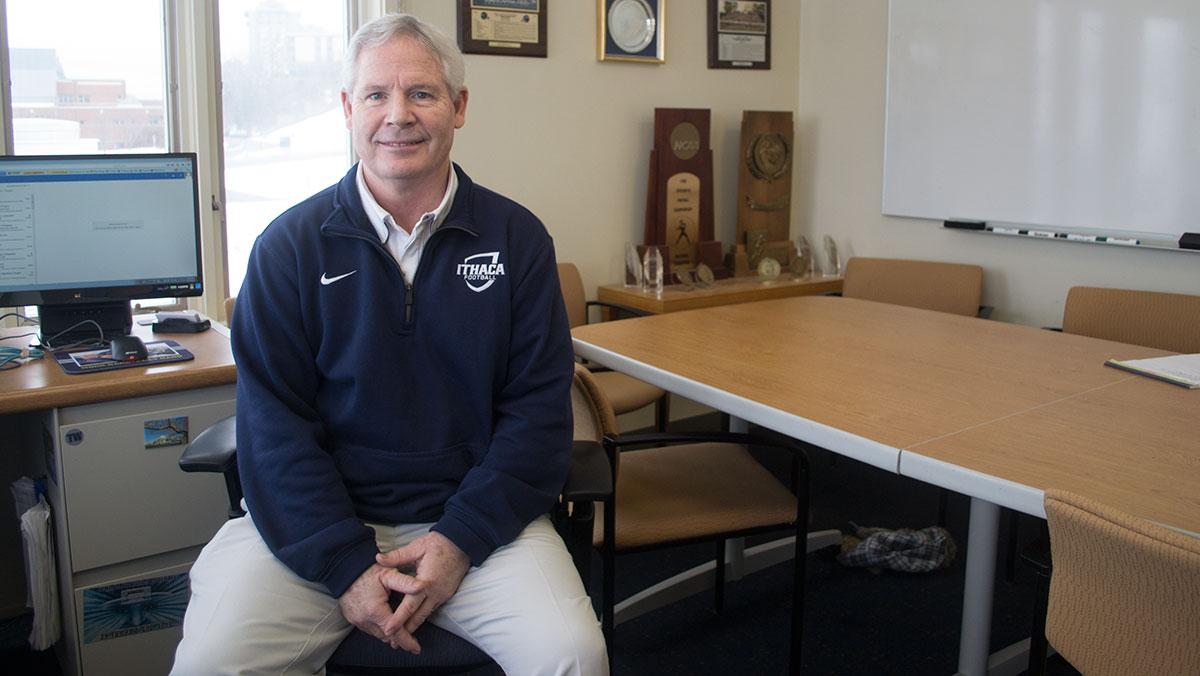 Earlier this month, Mike Welch, head coach of the football team, completed his one-year term as president of the American Football Coaches Association. Welch’s duties as president ended with the completion of the AFCA’s National Convention in Louisville, Kentucky, on Jan. 14. He was the eighth Division III coach to ever hold the position.

Welch’s term as president came during a tumultuous year for the sport on multiple levels, with further damaging findings in regard to football’s connections with concussions and other brain injuries, as well as the notable domestic violence incidents involving former Baltimore Ravens running back Ray Rice and San Francisco 49ers defensive lineman Ray McDonald.

Senior Writer Christian Araos sat down with Welch to discuss his tenure, issues in football and how the AFCA plans to deal with them at the collegiate level.

Christian Araos: What events did you lead as AFCA president?

Mike Welch: The board of trustees meets in May, and it’s a two-day meeting and the president is responsible for running the board meetings. So I had to prepare myself for that and just walk through the agenda with all the board members and ensure that the right protocol is being taken and input from Division III level. We have our own issues. A lot is discussed, and that’s certainly part of it, and it’s a combination of those things.

CA: What is it like interacting with coaches of various levels of football and acknowledging the needs for programs in these different levels?

CA: Did you learn something new from your interactions with coaches from different divisions?

MW: You always learn. I’ve been around some great leaders that faced some real challenges. How they handled it, how they approached it and their knowledge on how to meet those to challenges is always a learning experience, and I’ve been able to see that from a lot of great coaches.

CA: Are there any new initiatives the AFCA is taking up in regard to concussions?

MW: One association that the AFCA has is a partnership with USA Football along with Pop Warner football. It’s an organization that certifies youth coaches, and now we’re working into the high school level to block and tackle, and that’s keeping the head up. That’s something that’s been very, very positive and addresses the concussion issue. We need to reduce the number of concussions and certainly make sure that the care of concussions is done appropriately for the game of football … If we can continue to make it safer by teaching the proper techniques through the youth level all the way up to our level, spending time making sure that our players are equipped properly and using the right technique … That’s been a top item of business this past year.

CA: In light of the off-field issues, such as domestic violence within the NFL, has the AFCA looked into developing initiatives to prevent younger players from making those mistakes?

MW: The NFL is part of the game of football, and it’s a big part of it. It’s the most impressionable part. Our association has a strong relationship with the NFL. The domestic violence issue, the concussion issue, the integrity of the game issue, those all come into our discussion. We had a session on domestic abuse within our convention this past year. It’s something that we have our eyes on with the NFL players. We need to take a leadership role so that the young men that we coach are made aware, because certainly athletes are in the limelight in a good way and in a bad way, and we want to make sure we’re doing it the right way. The only way we do that is to educate our student athletes.

CA: Anything you were able to take away from your time as president and apply here at Ithaca College?

MW: Having served as the president and worked within an organization like the American Football Coaches Association, I’ve come to realize that with effort, you can make a difference, and it’s important to get involved whatever your beliefs are. My belief is the game of football. I want to make it in someway better, and working on a board of trustees and becoming president is one way. Serving on this board has enlightened me that everyone can make a difference and to get involved in what they’re passionate about, and for me it’s the game of football.