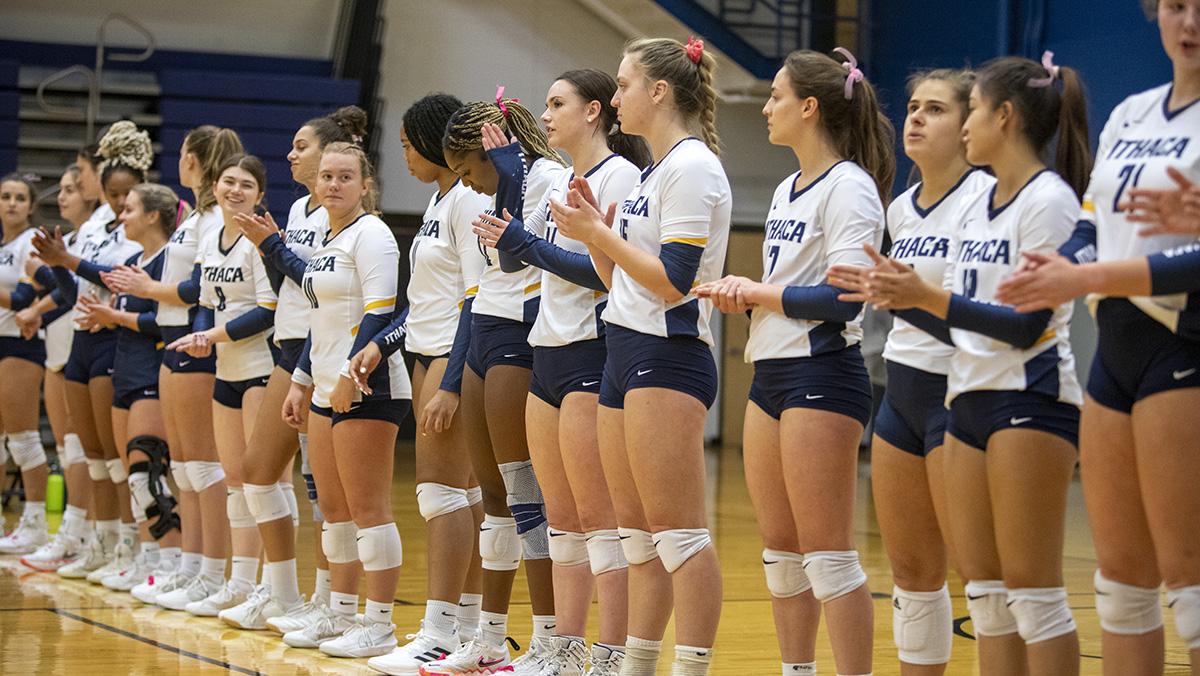 Xinyi Qin/The Ithacan
The Ithaca College volleyball team sits at a record of 18–4 this season and won 13 straight matches between Sept. 16 and Oct. 13. During that stretch, the team lost just 10 sets while winning 39 and earned sweeps in six of the victories.
By Emma Kersting — Staff Writer
Published: October 19, 2022

The Ithaca College volleyball team has set themselves up for a strong season and continues to perform as strong competitors, at this point having an overall season record of 18–4 and standing second in the Liberty League conference.

Last fall, the Bombers qualified for the NCAA Division III championships but lost in the first round against University of Wisconsin-Whitewater. Despite the loss, junior outside hitter Alexandra Montgomery said she still found the opportunity to be valuable.

“The whole experience was just surreal, and it was super exciting to just be able to experience it,” Montgomery said.

Head coach Johan Dulfer said he believes that making it to the NCAA championships at all, considering the obstacles that came with playing after losing the 2020 season to the COVID-19 pandemic, is a great achievement. The team went a long time without practicing or playing together, and from the 2019 to 2021 season, there had been a great change in the roster and the team had not been on the court for a year.

Dulfer said he considered the 2021 season to be a time the team took to rebuild based on what was lost after the canceled season.

“I always tell recruits, ‘Listen, if in a rebuilding year you still make the NCAA tournament, that’s a sign of a really strong foundation,’” Dulfer said.

Even though the Bombers did not win the Liberty League in 2021, they were able to qualify for the NCAA tournament in the at-large bid, which is selected by an NCAA committee. The committee looks at the resumes of teams that did not win their conference tournaments and see if they have enough quality wins to qualify for the NCAA tournament. Dulfer said he always makes sure the team plays a nationally competitive schedule, which helps them impress the committee at the end of the season.

This season, the Bombers are on the rise, defeating nearly all of their opponents, including college rival SUNY Cortland on Oct. 11 and Johns Hopkins University on Sept. 16, which was ranked No. 14 in the country at the time. Dulfer says that while the team has more wins than past seasons, they are still playing a highly competitive schedule.

Junior middle/right side Jamie Koopman was off the court at the start of the season because of an injury, which she said allowed her to experience the season differently by spending many games on the sidelines.

“These girls are all so talented and just want to get better at volleyball, and I could tell just by watching them that there is a fire there this year that has led us this far,” Koopman said via email. “These girls work so hard, trust each other, love each other and just want it so badly.”

One of the key elements to the team’s recent success is improved communication. According to Dulfer, the athletes told their coaches they believed more communication would better the team, so it has become one of the primary goals for the season. Koopman said the team has many goals, big and small, to help keep the team on track throughout the season.

“As a team we work towards better communication, getting physically and mentally stronger, being vulnerable with each other as teammates and friends, and overall just working as a team to better the ball,” Koopman said via email.

Montgomery said she wants to make sure the team is a supportive environment for everyone, on and off the court. Dulfer said that one of the team’s core values is communication and that the players respect each other.

“One of my biggest goals right now is just trying to be the best teammate I can, especially with some of our [first-year student teammates],” Montgomery said. “Just trying to make sure they know I’m here for them and their biggest cheerleader.”

Put simply, compared to last season, Dulfer said he believes the team is better. The players trained hard over the summer and are more confident because of it. The Bombers came into this season strong and were able to improve their skills rather than having to start fresh.

“We had a talented [first-year student] class come in to help us, but all the returners worked their tails off and really came back in fantastic form, so we’re better,” Dulfer said.

Not only has the team improved its communication this season, but serves are stronger as well. The Bombers are able to get strong serves against competitors which lends to their victories. Dulfer said this year’s team is likely the best serving team he has coached in 20 years.

“Even against really good opponents that may be bigger, physically stronger than us, we serve so tough that everybody is struggling against us at the moment,” Dulfer said.

The Bombers’ success, however, cannot be because of any one player on the team. While there may be certain individuals performing stronger than others during a game, those individuals can be different players each week.

Just one athlete, sophomore middle blocker Aleka Darko, has started all 22 matches, but 14 players have started at least one, and 18 have played in at least one. Dulfer said the team does not care who puts the balls down as long as they go to the floor. Dulfer compared the team to a spider web, because each individual player is integral to the success of the team.

“It makes no sense to talk about individuals because we call [the team] the web,” Dulfer said. “We’re all inextricably linked. You take out one little piece of a spider web, the whole thing falls together.”

Looking to the remainder of the season, Montgomery said the team hopes to win the Liberty League championship Nov. 5, an achievement that has never been accomplished in the team’s history. It last won a conference championship in 2016, when the college was still in the Empire 8. Koopman said competing teams are playing differently in comparison to last year, so the remainder of the season can be hard to predict.

“I think if we keep working hard and stay consistent with our training, we could have an awesome post season!” Koopman said via email.

Montgomery hopes to take home the title as it would serve as an automatic qualifier to join the NCAA tournament. As the Bombers are currently placed second in the Liberty League, Montgomery hopes the team continues to play at a competitive level and potentially move up in the ranking.

“We’ll have to see,” Montgomery said. “It’s going to depend on how we do on these other Liberty League teams. We have more games coming up soon, so it’s hard to say at this point, but we would love to be able to move up.

Darko said in an email she feels confident in the team’s work so far in the season and has high hopes looking to postseason matches. Similar to Montgomery, Darko said a big goal for the team is to win the Liberty League tournament.

“Everyone plays with their heart and the game is never over until it’s over,” Darko said via email. “If we keep playing with this unison and drive, I definitely see first place coming our way.”