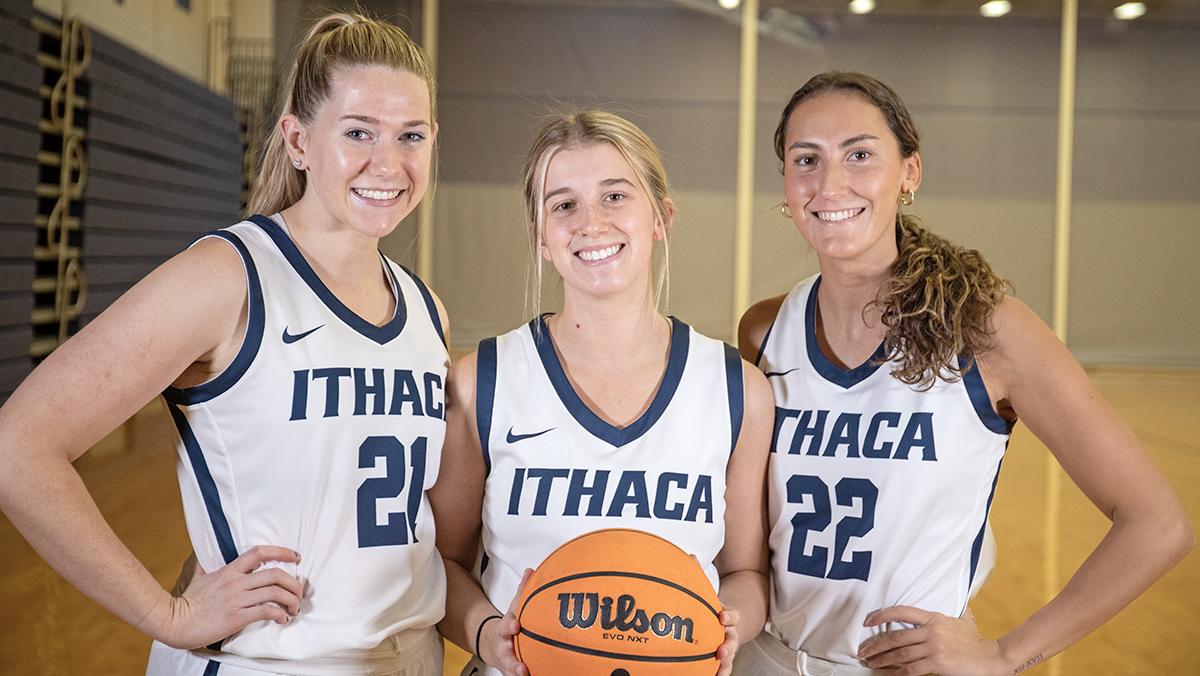 The Ithaca College women’s basketball team is looking to the upcoming season with high expectations after taking home the Liberty League Championship title for the last three seasons in a row.

Senior guard Camryn Coffey said the seniors are looking forward to another successful season, as they were on the team when the Bombers won the Liberty League Championship in the 2019–20 and 2021–22 seasons. Coffey said that while the team reached its end goal last year with an overall season record of 25–4, the team was simply playing for the love of the sport.

“Everyone was so excited to play every day, and we got in that groove of playing with each other where it was just fun and exciting, especially toward the end of the season, those games where we had so many fans,” Coffey said.

For the 2022–23 season, Coffey is hoping to be a strong leader for her underclassmen teammates. After not competing her sophomore year because of the COVID-19 pandemic, Coffey said she felt less confident coming into her junior season in 2021. Senior forward Emily Dorn also said that she feels like she holds a greater position as a leader this year.

“I definitely stepped into this new role this preseason,” Dorn said. “I was one of the main leaders. I feel like our [first-year students] feel supported and like they know what’s going to happen with the season. I think we prepared really well.”

To prepare for the season, Smith and Coffey said the team has been working hard in practices by going to the weight room three times a week and attending conditioning and agility sessions with Vic Brown, strength and conditioning head coach in the Office of Intercollegiate Athletics. Coffey said the team also played pick-up three times a week, just playing five against five without any drawn plays or coaches.

Smith said her teammates were pushing one another to improve every day in the preseason and they all look forward to the season starting.

“Everyone needs to be ready to work really hard from the start, because I think if we give it every day in practice and in all our games, I think we’re going to be really happy with how the season goes,” Smith said.

Raymond said his recruiting process has been different in the past few years because of the pandemic. His only understanding of how the new team members play is based on what the upperclassmen tell him about preseason practices.

“It’s so interesting … because of the COVID situation, I still haven’t seen them play live and in person,” Raymond said. “The recruiting was done all by video.”

Smith said that every season is different naturally because of the teammates that graduate and the ones that join the team as first-year students. She said she hopes to see a similar energy from this season’s team as there was last season.

“I think if we can keep the progress that we’ve made in the past and carry it into the future, that it will only set us up for a great season this year, even if it ends up being a different team,” Smith said.

All three seniors said they have a great appreciation for the coaches of the team, saying that they like the connection all the players have with their coaches. Coffey said Raymond thinks of the team as a family in order to establish trust on the court, doing things like keeping his office door open for the team to step in at any time.

“[Raymond] has meetings with all the [first-year students] once a week, just to make them feel welcome,” Dorn said. “At the same time, the upperclassmen still go in there at least once a week, if not every day, just to talk to him.”

Smith and Dorn said that this season, the coaches want the team to take the season one game at a time, setting short-term goals alongside their long-term goals of winning the Liberty League Championship again. Smith said she is looking forward to the competitive games on the schedule. The Bomber’s first game of the season this year was against their rivals, SUNY Cortland. Coffey said that in the past, the team has faced a few losses at the start of the season before getting into the swing of things.

“The first few weeks of games we usually struggle a little bit, have a few tough losses …” Coffey said. “Especially since our first game is home against [SUNY] Cortland, we lost to them last year. … That’s not gonna happen again; we don’t want to have these losses in the beginning because then you’re constantly having to make up for it.”

The Bombers next game will be at 5 p.m. Nov. 11 against Montclair State University in Montclair, New Jersey, that starts a stretch of four road games. They return to the Ben Light Gymnasium on Dec. 2 to host Vassar College.