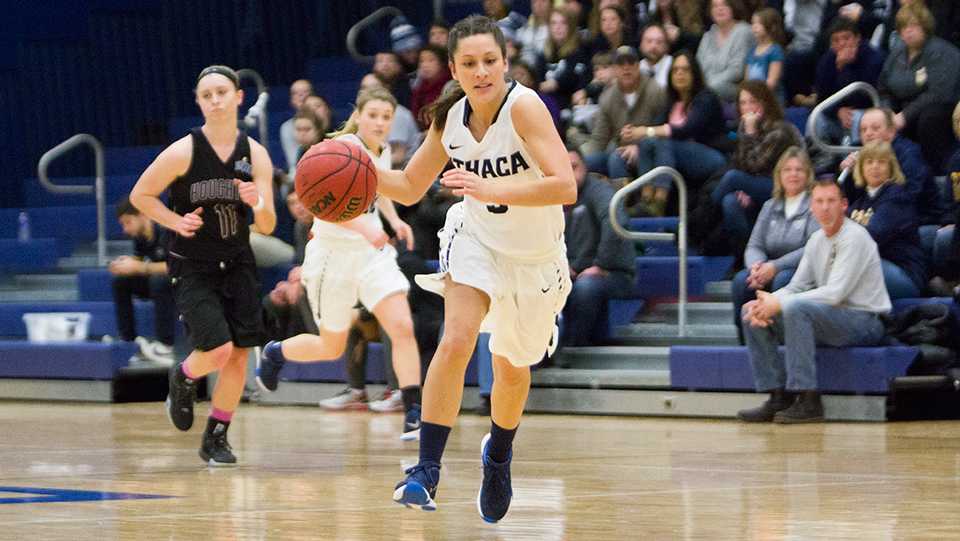 The Ithaca College women’s basketball team was in action Feb. 12 for an Empire 8 contest against the Houghton Highlanders. The Bombers were looking to snap a three-game losing streak. Houghton came in hoping for better results than its last game against the Bombers, when the team lost 72–42 Jan. 8 in Houghton, New York.

Throughout the first quarter, the Highlanders were hampered by their inability to play clean basketball. They committed five fouls in the opening act and failed to prevent the Bombers from slashing through to the paint.

The second quarter saw more of the same from the Bombers. A 6–0 run extended the Bomber lead to 27–9, and they showed no signs of letting up.

All this contributed to a sizeable 36–23 halftime advantage. Yacovoni continued to lead the way with 10 points at the break. Pipher extended her team-leading total to 12.

Yacovoni credited her teammates for her strong performance.

“Once I know my teammates have secured the ball, it’s pretty simple,” Yacovoni said. “I’m just running as fast as I can.”

Coming out of the break, the game’s narrative didn’t change. With 5:58 remaining in the third, junior guard Ali Ricchiuti found junior forward Erin Ferguson in the paint. Ferguson spun and sank the two, setting the Bomber lead to 46–26.

As the third came to a close, freshman Annie Giannone completed the old school 3-point play, completing a two pointer and then a free throw, making the score 59–32 Bombers as the fourth quarter approached.

Early in the final quarter, freshman Sara Jackson stepped back and uncorked the Bombers seventh three of the day, making it 64–33. The Highlanders would get a layup from freshman guard Leslie Moose, which the Bombers freshman guard Meghan Pickell would follow with a layup of her own to set the score at 66–35, the largest lead of the day for the Bombers.

Yacovoni’s big day continued as Giannone found her on a long up-court pass. Yacovoni laid the ball gently off the glass, giving her a total of 12 on the night and making the score 68–42 with 3:43 to play.

Shortly after, freshman guard Meghan Mazzella would layup her first two points of the night, breaking the 70 point barrier for the Bombers. The South Hill squad ended the game with solid ball possession and won the game by a final score of 73–49.

Head coach Dan Raymond said he was very pleased with his team’s effort, but made a point to emphasize the areas that need improvement.

“There’s a couple things we need to shore up on,” Raymond said. “We sent Houghton to the line virtually the whole second half so we need to get much better at our man-to-man defense.”

The Highlanders head coach Alicia Mucher said the team did not play its best game.

“The transition defense wasn’t so great,” Mucher said. “We’re looking to get better each day in practice and in games, and tonight just wasn’t our night.”

The Bombers will only have one night to celebrate their big win before they take on the Alfred Saxons 4 p.m. Jan. 13 in Ben Light Gymnasium.