Women’s basketball hopes to continue success in the Empire 8 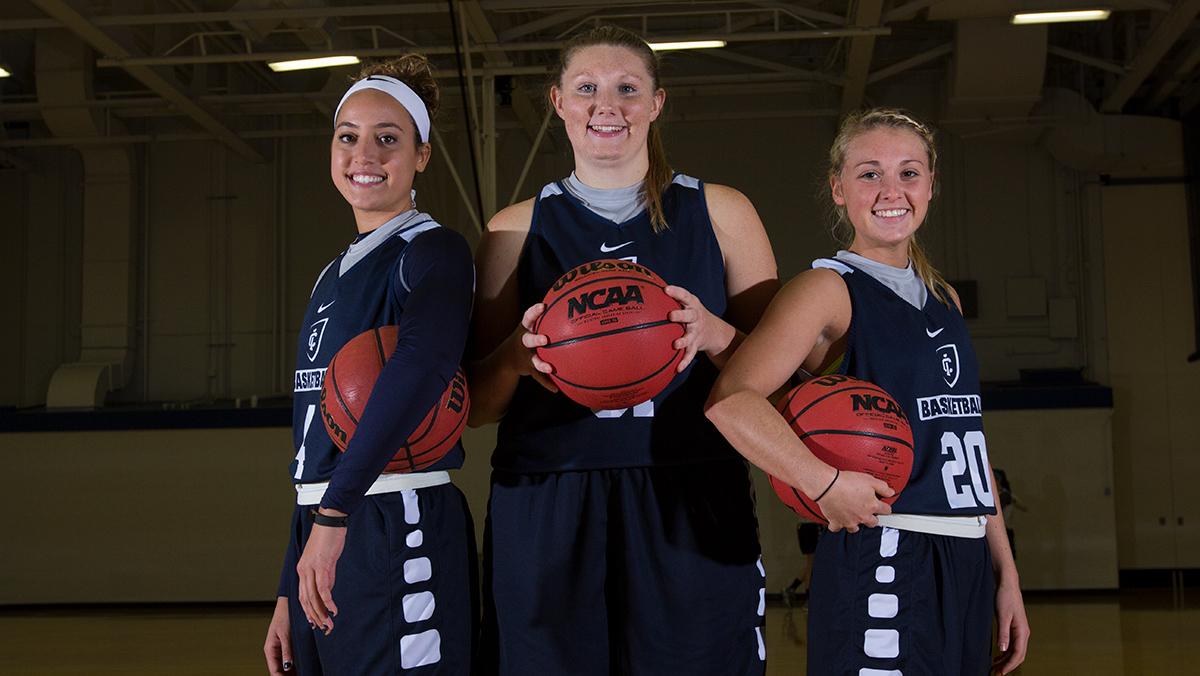 The Ithaca College women’s basketball team returns to the South Hill this year after making an appearance in the Empire 8 Championship final last season. After a 16–11 record last year, including an 11–5 record in the Empire 8, the Bombers are looking for more success with a team of returning stars.

Even with the tough loss of All–Empire 8 Tournament selection Keri Steele, the Bombers are returning a plethora of talent. Senior guard Ali Ricchiuti and junior guard Jordan Beers, along with senior forward Erin Ferguson, are back this year, and the team will have nearly half its top scorers from last season. Ferguson and Ricchiuti will also handle the rebounding for the Blue and Gold.

With a team that is only losing one senior, Ricchiuti said, experience will be key this season.

“We’re really fortunate that we only lost one senior because we have created such great chemistry over the past few years with the same group of girls,” Ricchiuti said.

Head coach Dan Raymond said last year’s crushing 70–44 loss to Stevens Institute of Technology in the Empire 8 final has only fueled the fire during this season.

“This year, I’ve got so many things going through my mind, especially after a disappointing year last year,” said Raymond, who is entering his 16th season. “I don’t want my expectations too high, but I’m optimistic.”

Last season, six out of the 11 losses were decided by fewer than 10 points. Raymond said he hopes the experience of the returning squad will help during close games.

“The great thing is they have the opportunity to work together and build relationships that bode well for good performances,” Raymond said. “It’s my reason for my optimism.”

With the team entering its second week of practice, it is looking for the return of Beers, who has been nursing an ankle injury, along with sharp–shooting freshman guard Sarah Cargill, who has also been out with an ankle injury.

Raymond said the upperclassmen all have a particular ability they bring to the team.

“Erin is considered the mama bear of the team,” Raymond said. “She wants to make sure everyone is OK and working together. On the other end is Ali. She is more of the vocal leader of the team.”

Sophomore guard Annie Giannone saw action in 26 games last season, including a start against St. John Fisher College. She, along with starting junior guard Erin Woop, will add experience to a team that is looking to make a run in the NCAA tournament.

Sophomore Allie Tunick and junior Allison Spaschak, both guards, along with junior guard and forward Julie Yacovoni, will anchor out a strong backcourt for the Bombers.

This year, the team is welcoming three freshmen. Raymond said Cassidy O’Malley, Cargill and Mia Herlan will make an immediate impact on the team.

“Cassidy is an immediate contributor because of her athleticism,” Raymond said “Sarah shoots really well, but with her injuries, we haven’t had much time to evaluate her, and we’re anxious to see her play. Mia Herlan is taking a bit more time to adjust but is doing really well so far.”

Beers said the team is focusing on each game instead of looking too far into the future.

“Our goals are to take the season one game at a time and not overlook any game on our schedule,” Beers said.

Raymond said that with the first game just days away, the team appears poised to accomplish its goals this season.