Women’s basketball looks for younger players to step up 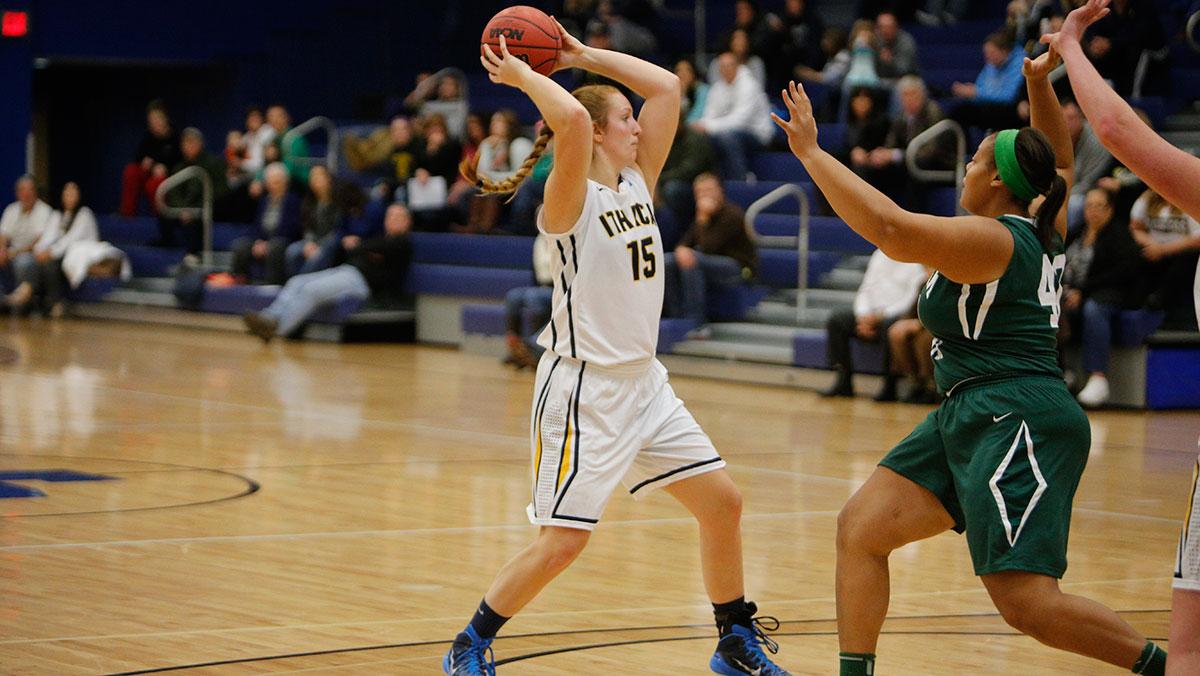 After graduating five seniors — including three All-Americans and two 1,000-point scorers — from a team that won the Empire 8 Championship and reached the sectional semifinals of the 2014 NCAA Division III Championship, this year’s women’s basketball team had much to live up to.

The team has responded, racing out of the gate with a 5–1 start.

Head coach Dan Raymond said the transition has gone smoothly for many reasons, including the contributions of players from top to bottom of the roster.

Senior guard Samantha Klie added that anyone could have a big game on any given night.

“Our depth [has been a strength],” she said. “We have so many girls who can shoot the ball well and put up big numbers.”

The team graduated its top three scorers from a year ago: Mary Kate Tierney ’14, Kathryn Campbell ’14 and Jenn Escobido ’14. As a result, senior forward Francesca Cotrupe said she believes that each player on the team has had to make a leap in terms of individual production.

“A lot of people had to step up this year scoring-wise, rebounding-wise, assist-wise and leadership-wise,” Cotrupe said. “It took a lot from everyone, and it’s more of a team effort this year.”

Having a younger team results in less pressure to immediately perform at the same high standards as last year’s squad, Klie said. However, with the team gunning for its fourth straight Empire 8 title, goals are still high.

“I think it’s kind of a good year because there are fewer expectations put on us,” Klie said.  “We’re very young, so we’re just kind of having fun and letting it come to us. With that being said, there’s an additional expectation for us to carry on the success of the program that we’ve really been trying to create the past few years.”

This year’s team is much younger than last year’s, with just five upperclassmen compared to nine from the 2013 team. As a result, the upperclassmen on the team have played a big leadership role, Klie said.

“We have really, really talented young players, so I think for those of us that have been here, we’re trying to be consistent, bring that experience and just be a leader,” she said.

Underclassmen have also played a big role for this year’s team, particularly sophomore guard Ali Ricchiuti, who is averaging 15.6 points per game. Ricchiuti has helped to fill the void left by last year’s graduating class, leading the team in scoring in four of its first six games this year after averaging just 2.8 points per game last year.

Cotrupe said Ricchiuti’s play at the guard position has made the offense run smoothly.

“Ricchiuti is able to set the offense up for us,” Cotrupe said. “She’s great at the little crossover everyone talks about.”

Ricchiuti — and her crossover move — has been part of the high-octane offense that has been critical to the team’s early-season success, Klie said.

“Our guards are really quick,” she said. “We push the ball in transition a lot, we like to run and we like to pressure teams.”

Cotrupe said she believes this, along with possessing a physically stronger team, has helped the Bombers adjust quickly to changes in personnel.

“We actually love to run the ball, so I think we’re really good in transition,” Cotrupe said.  “We have a size advantage over most teams as well.”

Cotrupe said hopes are as high as ever for the South Hill squad this year, with the team hoping to contend for not only an Empire 8 title, but a national title as well. The team is currently receiving votes in D3hoops.com’s national poll.

“We always have the same expectations, which are to win and get as far as we possibly can, which is a national championship,” Cotrupe said.

Raymond said understanding roles was one of the biggest things he stressed in the preseason. He said he believes this year’s senior class has done this perfectly.

“They can’t be who left, they have to be themselves,” he said. “I think they’ve done a really good job of embracing that, just being Ally [Mnich], Sam, Fran and Geena [Brady], and not trying to be MK [Mary Kate Tierney] and Kathryn and all of them.”