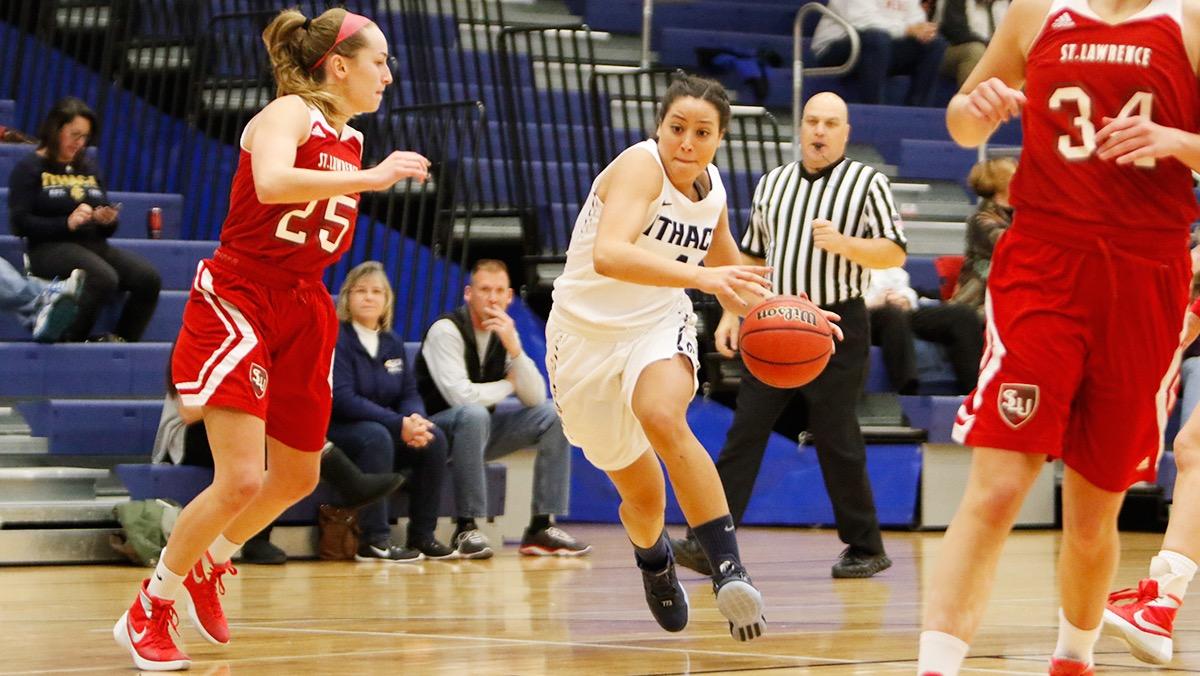 The women’s basketball team picked up its third loss of the season after losing to St. Lawrence 67–63 Dec. 5 at Ben Light Gymnasium, making its record 3–3.

The first quarter started off slow for both teams as the first points of the game were not scored until three minutes had passed.  The scoring picked up by the end of the quarter as the Bombers trailed 14–10.  St. Lawrence went on to expand its lead off of 37.5 percent shooting to enter halftime up 32–22.

The Blue and Gold were able to come back in the second half, outscoring the Saints 16–6 in the third quarter to tie the game going into the final ten minutes of play.  The score continued to go back and forth throughout the fourth quarter and with eight seconds left, with the Bombers leading 53–52, St. Lawrence’s Jenny Scudder hit a three to take the lead.  On Ithaca’s next possession, sophomore guard Jordan Beers drove to the basket and banked in a layup with 1.6 seconds remaining to send the game into overtime.

The first three and a half minutes of overtime were very tightly contested as both teams were matching the other’s shots.  But with the scored tied at 63–63, St. Lawrence hit two free throws to take the lead, and the Saints went on to beat the Bombers 67–63.

A big problem for Ithaca was that leading scorer Ali Ricchiuti got into foul trouble early in the game and did not play the entire second quarter.  Head coach Dan Raymond said his team’s sloppy play was the reason for their loss.

“We made too many mistakes on both ends of the floor,” Raymond said.  “We turned the ball over too many times and gave up open looks. It just came down to making poor decisions.”

Beers scored a career-high 24 points in the loss along with seven rebounds and three assists.  Junior forward Erin Ferguson was one a point away from a double-double with nine points and ten rebounds.  The Bombers were once again without starting point guard Alex Gilligan, who will miss the remainder of the season with a torn ACL, so sophomore Erin Woop will start in her place.

St. Lawrence was led by sophomore Scudder who scored 21 points, grabbed five rebounds and had two steals in the victory.

The Bombers will look to bounce back when they travel to Geneva, New York, to take on William Smith at 7 p.m. Dec. 11.