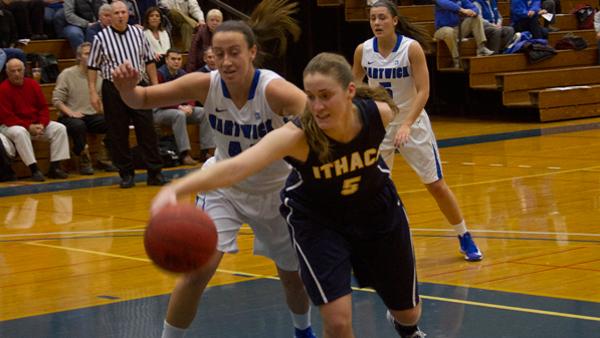 Emily Fedor/The Ithacan
Senior forward Devin Shea battles for control of the ball during the Bomber's game against Hartwick Saturday evening at Ben Light Gymnasium. The Bomber's defeated Hartwick and improved their record with a 53-45 win.
By Danielle D'Avanzo — Senior Writer
Published: January 27, 2013

The women’s basketball team is once again on top of the Empire 8 standings after defeating Hartwick College 53-45 on Saturday in Ben Light Gymnasium. The Bombers handed the Hawks their first conference loss and ended their win-streak at eight.

The South Hill squad played suffocating defense in the win against Stevens on Jan. 25.  The Blue and Gold held the Hawks to 28.8 percent from the field and forced 17 turnovers that resulted in 19 points.

Senior forward Liz Conti said the reason the Bombers were able to get the win their strong defensive game.

“We just root it back to our defense,” Conti said. “We try to make sure that if we can get stops on defense, then we’re going to be able to get things going on the other end.”

Senior forward Devin Shea, who led the Blue and Gold with 17 points and had a game-high four blocks, said the team did a lot of work on and off the court to help prepare themselves for this matchup.

“With our walk-through, we ran through [Hartwick’s] plays to try and have an understanding of how they play,” Shea said. “We watched film and got an idea of the tendencies of certain players and what they like to do, like what hand they’re more dominate with, so we were able to play to that with our defense.”

Conti said another reason why the Bombers have been playing so well is because the team sets high standards for each other.

Though the Blue and Gold played back-to-back games, fatigue did not play a factor against the Hawks. Shea said Head Coach Dan Raymond focuses on fitness to help the squad become accustomed to this type of schedule and be prepared for playoffs.

The Bombers will play Hartwick for the second time this season on Feb. 8. Assistant Coach Katherine Bixby said though team was able to execute their game plan well, there are still improvements to be made going forward.

“We didn’t take care of the ball as well as we thought we would,” Bixby said. “We also like to hold the top scorers under their averages and #22 [Maria Foglia] got five points over her average. That was a little disappointing. We gave her easy three-point shots so we have to stop that next time.”

The South Hill squad has high hopes of reaching the NCAA Championship game this season but know that the first step to achieving their goal is by winning the Empire 8. Shea said this game was a statement to the Empire 8 that they deserve to wear the conference crown.

“It was a big statement game,” Shea said. “Especially after our loss to [St. John Fisher], a lot of teams kind of raised an eyebrow and thought, ‘Well if they can do it, we probably can do it too.’ So with this weekend being able to beat Stevens the way we did and being able to hold off Hartwick, it shows that we’re still the top competitor in the Empire 8.”