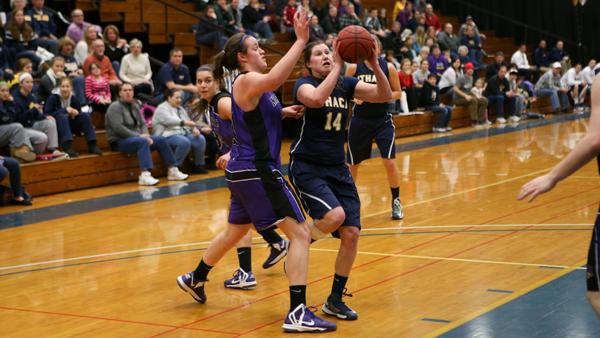 Women’s basketball practice Monday night was a confusing affair. Miscellaneous objects such as chairs, foam soccer balls and toy soldiers were scattered across half the court of Ben Light Gymnasium. If that wasn’t odd enough, half of the women’s basketball team wearing blindfolds would only add more confusion to the supposed chaos.

At the center of it all stood the Bombers’ coaching staff, laughing along with players while observing the activity around them. The players were participating in an unusual scavenger hunt, one that required one person to maneuver through the obstacle course blindfolded while their partner stood outside of the perimeter verbally giving directions.

It may seem like a random game and a waste of practice time, but Head Coach Dan Raymond said everything the South Hill squad does in practice has a purpose.

The drill required each pair to rely on communication and trust to accomplish their goal, fundamental skills that will be necessary for the Blue and Gold when they take on Williams College on Friday in the Division III NCAA Sectional Semifinals.

During the postseason, Raymond said, he believes it’s better for the team to have a lighter practice on Mondays instead of taking the day off.

“When we get into postseason, the games become more intense, so more energy is expended,” Raymond said. “What we do is we have the players come in and do a light workout just to get the blood flowing again. We don’t do anything that’s going to be high impact to try and save their legs.”

When the Blue and Gold first huddled up at the beginning of practice that afternoon, junior varsity Head Coach Shannon Finucane, who made it to the Final Four every season during her four-year career on the Amherst College women’s basketball team, reminded the team how far their hard work had brought them this season.

“There are 16 teams left,” Finucane said. “That’s it. Sixteen teams left in the NCAA playing basketball. We’re one of those teams.”

The South Hill squad is making an appearance in the Sweet 16 for the second time in program history. Junior guard Mary Kate Tierney said this accomplishment reflects how well the team works together on the hardwood.

“We don’t really have a standout player who’s doing everything for everybody,” Tierney said. “It’s more impressive the way we play unselfishly. We have a deep bench, and everybody is just exploding at the right time.”

The Blue and Gold have won by an average of 16 points during their postseason run. In the first round of the NCAA tournament last Friday, the Bombers beat Colby-Sawyer 56-43. The players and coaching staff said despite the big victory, the team did not play their best game, and it motivated them to come out stronger against Smith College the next day.

The South Hill squad defeated the Pioneers in dominating fashion, earning a 73-50 victory. Senior forward Elizabeth Conti said the team had a tendency to “let up on the gas pedal” during the second half, but this wasn’t the case against Smith.

“Throughout the season, people would have a big game here and there, but now we’re starting to click,” Conti said. “All the injuries have been taken care of, and it’s just all coming together at the right moment.”

The Bombers are now 27–2 overall but are still three games shy of reaching their goal of playing in the national championship match. Raymond said this team is confident it will be playing in Michigan on March 16.

“This is a group of individuals that I’ve never experienced anything quite like it,” Raymond said. “They just expect to win.”

There are a number of reasons why this team has been successful this season, as shown by their record. However, Conti said this weekend’s contest will come down to the Blue and Gold’s bread and butter: its defense.

“We play phenomenal defense that not a lot of teams know how to handle,” Conti said. “Our defense is going to be huge in these final games.”