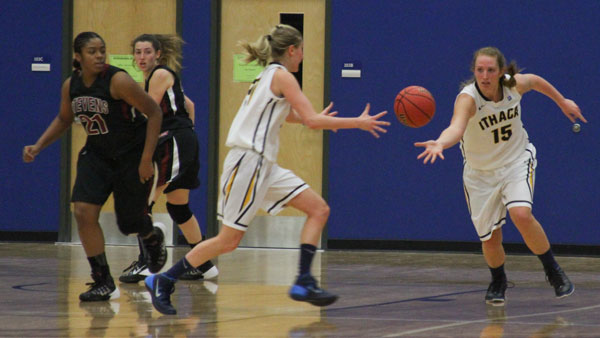 The women’s basketball team secured its first place slot in the Empire 8 conference with an 80–35 win against Alfred University on Feb. 22. The Blue and Gold ended their regular season on a 13 game–winning streak, marking the fifth season in a row the team has secured at least 20 victories.

Meanwhile, about 200 miles east of Alfred, N.Y., Hartwick College’s women’s basketball coach, Missy West, eyed the scoreboard at Lambros Arena in Oneonta, N.Y., as the last seconds ticked off the clock. The score was 64–55 in favor of West’s squad. Despite ending the regular season with a 21–4 record, the Hawks came up short on the tie-break for No. 1 seed to the Bombers in the Empire 8 Conference Championship Tournament.

The Bombers’ 45-point win against Alfred was the team’s largest margin of victory since March 3, 2012, when the squad won by 47 against Elms College in the semifinal round of the NCAA Tournament. The victory also catapulted the Bombers ahead of the Hartwick College Hawks, who had been on top of the Empire 8 conference standings since Jan. 3, for the first seed in the tournament.

The teams ended the 2013–14 season with identical records, both within and outside the conference. Each finished 21–4 overall and 13–1 in the conference, and their conference records determined E8 Championship Tournament seeding.

West said while one of the team’s main goals fell short, the team does not want to dwell on past events.

“Of course one of our goals was to host the tournament,” she said. “So was it disappointing? Yes, but it is what it is, and now we just need to focus on what we can control.”

To determine which team would host the tournament, a tiebreaker was needed to separate the Hawks and Bombers. Because of identical records, the teams were ranked on four different criteria before a leader emerged: head-to-head records, records versus subsequent finishers, road record versus conference opponents and NCAA strength of schedule rankings. The Bombers prevailed in the final criteria with a greater strength of schedule.

The top four teams in the conference — the Bombers, Hartwick, St. John Fisher College and Stevens Institute of Technology — advanced to the conference tournament. The South Hill squad currently ranks first in the NCAA East Region Rankings for the 2013–14 season. As the top-seeded team, the Bombers will face No. 4–seeded St. John Fisher in the semifinal to open the tournament. The Blue and Gold won both matchups against the Cardinals this season.

The other semifinal matchup is between Stevens and Hartwick. The Bombers’ only loss in the conference came against Hartwick on Jan. 3, but the Bombers avenged that loss to the Hawks on Jan. 25 with a 70–59 win in Ben Light Gymnasium.

If Hartwick and the Bombers win their semifinal games, it will be the third year in a row they play each other for the conference championship. It will also break the tie of the season series between the teams this season.

Junior forward Geena Brady said history may repeat itself, but the team wants to remain focused because anything could happen.

“We’ve played them the past two years in the conference championship,” Brady said. “I think there’s a very good chance because they’re a very good team, but you never know. Stevens might surprise us and beat them out in the first round, but we want them again. We want to beat them.”

West said her message to the team is to prepare for the first opponent and avoid complacency.

“Right now our focus is Stevens, and that’s what it’s going to be,” she said. “We can’t look past that game and just assume that we’re going to make that championship game.”

“I think we’ll eventually see [Hartwick] in the E8 tournament,” she said. “It’s always been a big rivalry so I think it’s going to be a big game. They have a really good coach, and they want it just as bad as we do, but I think we’re going to win.”