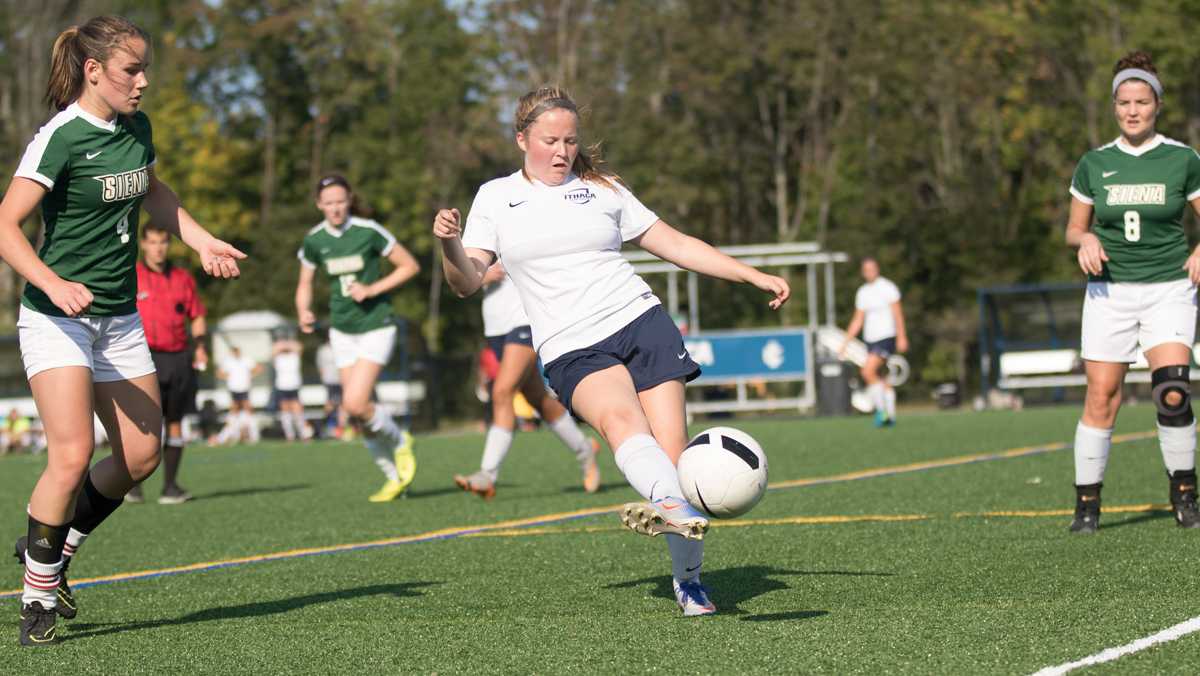 The Ithaca College women’s club soccer team has begun its season with a sizzling start.

The team has scored 30 goals while only allowing one, including a 9–0 win against Siena College on Sept. 10. The Bombers had a streak of not allowing teams to score until they allowed their first goal Sept. 24 at SUNY Albany.

Club teams are not allowed to recruit players, so the team uses the college’s student organization fair to promote the team. Up to 50 women come out for tryouts, and there are currently 26 players on the team.

The team plays club teams from all three NCAA divisions. Senior goalkeeper Carley Strachan said that playing Division I schools does not intimidate them.

“We have been to regionals before and we know how to handle teams that are like that,” she said. “It’s not what’s off the field that matters, it’s what on the field that does.”

The team can only practice on Tuesdays and Thursdays due to the limited field ability of Higgins Stadium. Other nights of the week, the players practice drills by themselves to get better at playing soccer.

“Although it is only twice a week, it’s still enough to develop our skills and chemistry together as a team,” DiVasta said.

“It’s been my baby and my passion and what’s kept me in the town this long,” he said.

Baker said the team has to stay focused if they want to advance beyond the regular season. They have five contests left in the season, including games against rivals Cornell University and SUNY Binghamton.

“I always tell them, ‘If we stick to our game plan and formations, we will be fine,’” Baker said.

At the end of the season, only 24 northeastern teams from Division I, II and III qualify for a regional tournament. Thirteen teams qualify for the tournament with automatic bids because they win their respective conference, and the remaining 11 teams make the cut depending on the power rankings and overall records. If the team wins the regional tournament, they advance to nationals

As a club sport, the South Hill squad has to schedule the referees for home games and drive themselves to away games, which are up to three hours away. The players also have to schedule games and practices, and register for tournaments that they want to play in.

Strachan said the players on the team have to maintain a positive attitude in order to stay motivated.

“We make sure that we are always progressing with our skills on and off the field, and that we don’t need the ‘recognition’ that the varsity team gets, as long as we do well and accomplish our team goals after each weekend with our game,” Strachan said.

Baker said he is always making sure he is steering the ship in the right direction.

“It’s a little nerve–racking as a coach trying to keep the girls focused,” Baker said. “Especially with such big games coming up.”

The Bombers have upcoming games against Division 1 Cornell University and SUNY Binghamton.

Besides playing soccer, many of women have created great friendships with other teammates.

DiVasta said she has made great bonds with all of the women on the team.

“This is a great place to make friends,” she said. “I feel so close to even the new freshman girls on the team, and we all hang out together outside of practice.”

The Bombers will look to keep their win–streak alive as they progress through the season. Coach Baker said he is already impressed with how far they’ve come.

“It’s amazing how the girls come together as a team with limited practice time,” he said. “They work their butts off for their own glory. It’s amazing to me because they care a lot and that’s what it takes for club.”