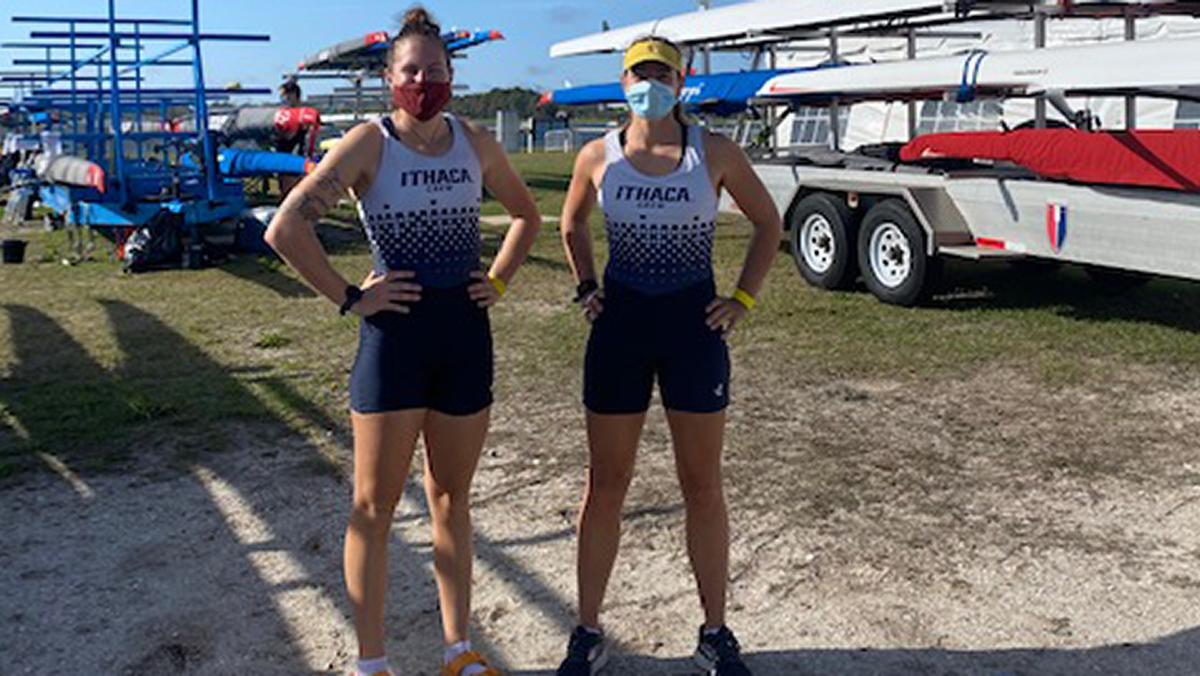 When former Ithaca College’s women’s crew and sculling team members Savannah Brija ’18, ’20 and Karina Feitner ’18 joined the program in 2015, neither had any experience in rowing. Nearly six years later, the two participated in Olympic rowing trials for the chance to represent Team USA at the Tokyo Olympics.

Though they both missed the cut, from Feb. 22 to 26, the two participated in the five-day event held in Sarasota, Florida. Brija was able to advance all the way to the third day of the event, while Feitner did not make it past the initial 2K time trial on the first day.

Both athletes came to Ithaca with the plan of playing a sport, just not rowing. Brija started her career as a student–athlete as a member of the women’s soccer team, while Feitner played women’s lacrosse. Brija began rowing her freshman year, but Feitner waited until her sophomore year to give the women’s crew team a try. Once Becky Robinson, head women’s crew coach, saw what each were capable of, she said that she knew that they were destined for success.

“From day one, both those guys walked in and they were competitors,” Robinson said. “They didn’t learn that here; they came with it, and then they developed that competitiveness. They just brought it into rowing, and they developed here as rowers.”

This is not the first time Robinson has coached a rower who has gone on to attempt to compete in the Olympics. In the 2016 Summer Olympics, alum Emily Morley ’16 competed for the Bahamian rowing team.

“We’re starting to create this culture and idea on the team that this is possible,” Robinson said. “We’ve now had a couple alumni that have moved on to basically rowing at the international level, and it’s really exciting.”

Robinson said the college is one of two colleges in the country that offers varsity sculling, which is a single or double boat with two oars per sculler. The other program is Oklahoma City University in Oklahoma City, Oklahoma, which is where Feitner currently resides. She moved there two years ago and has been spending the last two years training at the USRowing National High Performance Center in Oklahoma City.

Robinson said she believes the sculling program offered at the college was a tremendous help in Brija and Feitner’s preparation for the trials.

“Certainly, having varsity sculling was a huge benefit to both of those guys because all of the Olympic trials that were going on were in singles and doubles, which is sculling and crew,” Robinson said. “Rowing, typically, it’s sweep rowing, so athletes have one oar compared to sculling, where they have two. … They would not have been able to compete in [the time trials] had we not have that sculling opportunity at IC.”

Feitner thought her rowing career was over following her senior year. After her boat, the Varsity 8, placed second in the NCAA championship and an emotional bus ride following the event, she said she planned on going to graduate school. But, before Feitner could get off the bus, Beth Greene, assistant women’s crew coach, recommended delaying graduate school.

“I thought that was it, that was the last race I’d have,” Feitner said. “Post-collegiate rowing is so much fun. It’s such a different environment in a lot of ways. In collegiate sports, there’s a feeling of social club aspect of it. But once you get to this level, everyone is dripping sweat during the warm up. Everything they do in and out of practice is dedicated to improving.”

Feitner’s team was supposed to compete in last year’s Olympic trials in West Windsor, New Jersey, but the trials were canceled due to COVID-19 the night before the team’s flight left. Feitner said the team had to change gears, but it got out on the water in singles again in May.

Brija said that she loves competing at a higher level and that she has wanted to since she started rowing. Because she was earning her Doctor of Physical Therapy degree in 2020, Brija was not available to compete for the Olympic trials in March 2020. With her degree completed and the postponement of events, she was able to compete this year.

“My ultimate goal is to make it to the Olympics,” Brija said. “That’s why I’m still training, that’s what I’m going for. … Hopefully, I can make the national team in the next few years to really set myself up for that.”

Brija trained in Saratoga, New York, with the Advanced Rowing Initiative Of the Northeast (ARION). Though Brija did know her former teammate was also going to participate in the time trials, she said that she was more focused on proving her skill to the rest of the competition.

“I didn’t think as much as competing against [Feitner] specifically.” Brija said. “Because it was my first elite race, I just wanted to post a time that I felt was my best and could be proud of regardless of placement.”

When Brija and Feitner rowed for the Bombers, Robinson said it was fun for her to see them challenge each other while being supportive teammates. Feitner said that Brija motivated her to become a better athlete in the process. While both Brija and Feitner have their sights set on Olympic bids the next time around, Feitner enjoyed seeing her former teammate compete against her at the trials.

“I was so happy that [Brija] was there with me,” Feitner said. “She’s truly one of the fiercest competitors I’ve ever met.”