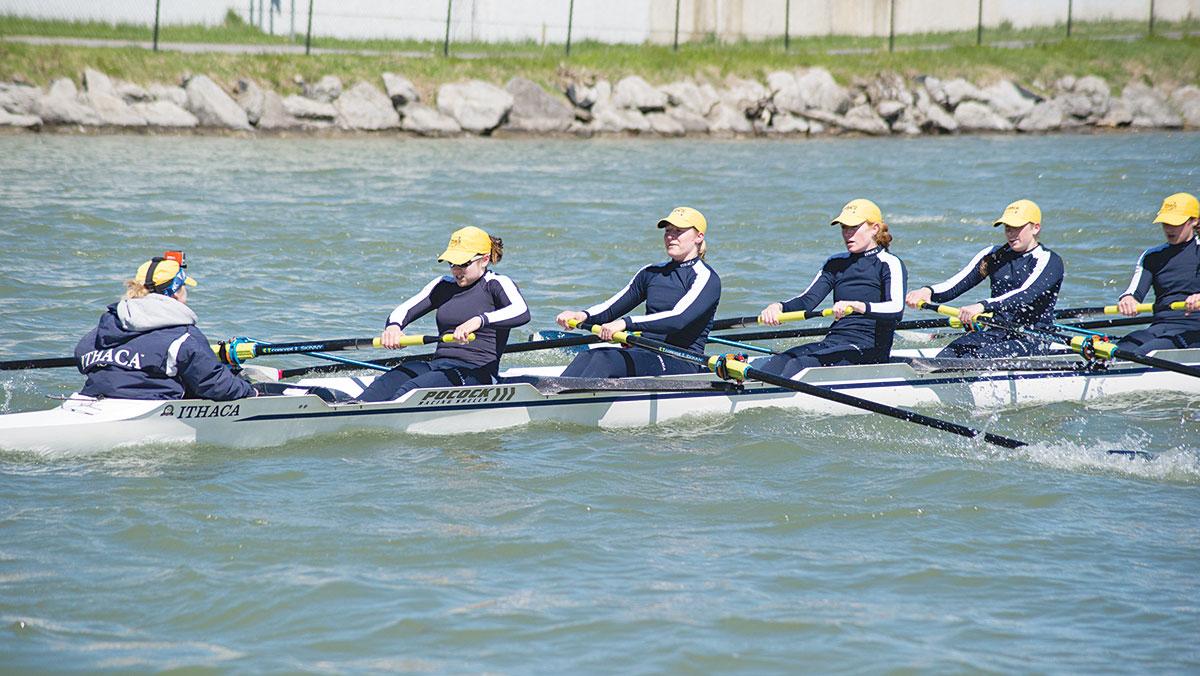 Tommy Battistelli/The Ithacan
The women's crew team competes against Colgate University, Marist College and Hamilton College on April 25, 2015, at the Cayuga Inlet. This year, they are focusing on having fun.
By Andrew Sullivan, Casey Koenig — Sports Editor and Contributing Writer
Published: March 2, 2016

Most of the Ithaca College athletic programs have the same goal at the beginning of their seasons: to reach their respective NCAA Championships. For the women’s crew team, however, earning a spot at NCAAs is not the prime focus of the season.

Head coach Becky Robinson has decided to shift the team’s main focus to the Dad Vail Regatta, which is being held May 13–14 in Philadelphia, Pennsylvania. This will mark the 40th anniversary since the team won the inaugural regatta back in 1976.

When it comes to the selection process for the NCAA Championship, six teams are selected from the New York region to row for the title every year. The first criterion for selection is the automatic bids for the respective conference winners.

Robinson said there is a chance the Bombers could be the fastest team in New York state, but since they are not part of a conference with an automatic qualifier, they could be bumped out of their spot for NCAAs by a slower team from a conference with a qualifier. She also said even though the squad has a chance to earn a bid, the odds are not in its favor.

“I’ve tried to change the focus to something that is more realistically achievable, and that’s winning the Dad Vail,” Robinson said. “We are just putting our energy and focus there, and my hope is that inspires us and energizes us, giving us something real to go for, that we are fast enough, and we do end up qualifying [for the NCAA Championship].”

In the meantime, Robinson said she is looking forward to watching the young bloods from last spring season step up into a larger role in 2016.

“We had a young group, and that makes this year all the more exciting because from our varsity eight last year, all but one are returning this year,” she said. “That group didn’t just settle for being in the seat in the boat. They worked harder this year, and I anticipate them to be a lot faster than we were last year.”

“I feel like we’ve created a really good culture,” Peterson said. “It’s just kind of incorporating the novices into the culture and creating more cohesion between the whole team rather than just varsity.”

She also said that once a week, the team hits the pools to play a friendly game of water polo to further develop the chemistry among the rowers.

One improvement Robinson said she would like to see is for the team to take its energy and confidence and translate that into truly believing in themselves.

“I think that there’s a difference between wanting to win and working to win, but then really believing it,” she said. “When you think you can’t keep going, that belief is the little extra piece that puts it over the edge to make the difference.”

Novice assistant coach Madison Keaty, who recently graduated with a master’s degree in sports psychology from the college, runs the program. Keaty and the rowers participate in a series of mental relaxation exercises, including meditation and “quiet sitting,” which is when the team sits in silence while envisioning a blank slate and clearing the mind of all thoughts.

Peterson said emphasizing the mental aspect of the sport will play a key role in the success of the team this season.

“I think that’s really going to help us in the spring when we are in the middle of a 2K or when we are at the start line and we need to take a deep breath and replace our thoughts,” Peterson said.

Another factor for the Blue and Gold for the 2016 season will be the role of senior captains Krista Syracuse, Emily Morley and Katie Ely.

Morley said she and the other captains have worked together to establish a loose and friendly environment.

“We’ve created a culture that it’s OK to be happy for a personal-best time, but it’s also OK to feel crappy after a horrible piece that you’ve done,” Morley said. “I think we’ve created a safe space for people to come.”

As for her keys for success for the team in 2016, Morley said if the team can clean up its starts at the beginning of each race, the sky is the limit for the Bombers.

“I know that we were faulty in our starts last year. Faulty in the sense that we just didn’t jump the competition,” Morley said. “Having a visual of your competition instead of chasing them obviously gives you a lot more motivation.”