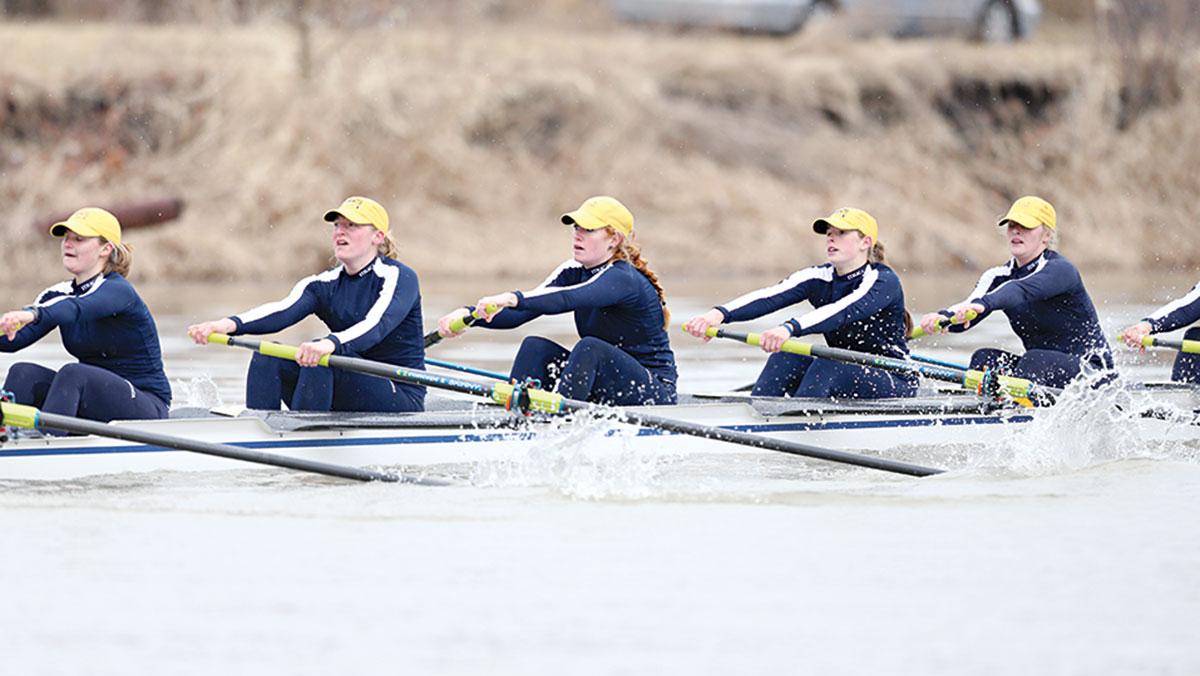 File Photo/The Ithacan
Members of women’s crew race in the Blue and Gold’s regatta against the University of Rochester on Feb. 5, 2014, at the Cayuga Inlet.
By Ithacan Staff — The Ithacan
Published: February 25, 2015

After missing the NCAA National Championship race last season, the women’s crew team will look to redeem itself in 2015 with the help of one of the largest freshman classes in the history of the program.

Twenty-seven rowers entered the program this season, which makes up half of the 55-athlete roster. After graduating 10 seniors who were key contributors to the team, assistant coach Beth Greene said she expects big things out of her first-year rowers.

“We have a really strong freshman class,” Greene said.

As always, Greene said, the team’s main goal is to reach the NCAA Championship race, and it will take a mix of returners and new players to achieve its goal for the first time since 2013.

The Bombers return senior Jennie Peterson, as well as juniors Krista Syracuse, Emily Morley and Carrine Putnam, who all raced in the team’s first varsity boat during the Eastern Collegiate Athletic Conference race last season. These veterans, along with seniors Abigail Foxen and Delaney Pfohl, sophomore Jacqueline McDevitt, junior Katie Ely and freshman Colby D’Onofrio will likely make up the first varsity boat for the Blue and Gold.

Junior coxswain Melinda Keene said while every race is important for the Bombers, the team is especially looking forward to the ECAC race, which will be key to helping the team qualify for the NCAA Championships.

“All of the races are important in some way for getting to NCAA’s, but the biggest, or perhaps most competitive, races are states and ECACs,” she said.

Along with D’Onofrio, three other freshmen made the jump to the varsity team: Libby Burns, Catlynn Frank and Emily Vosburg. For a team without any first-year rowers on the varsity roster last season, Greene said, this is a big change because it brings an element of youth that the team did not have last year.

“It is going to be a very different experience because normally there are only one or two freshmen that get pulled up to varsity,” Greene said.

Another smaller goal for the team is to defeat rival William Smith College. Greene said a victory over the Herons will help qualify the Bombers for the NCAA Championship.

Foxen said the William Smith race will be an important regatta because they are a comparable team to the Blue and Gold.

Last season, the Bombers’ top-boat finished second to William Smith’s top boat in the April 19, 2014, regatta. This year, the South Hill squad will face off against the Herons in its first regatta of the season March 28 in Ithaca.

Greene said home matches will be crucial for the Blue and Gold because they allow the team to enter more boats.

“All of our home games are key because it allows more people to get in the water and have experience,” Greene said.

Experience will be important for the Bombers, who will need to develop their freshmen for next year, as they will graduate nine seniors after this season.

Keene said regardless of key returning rowers, developing chemistry in the water will be key, as the mix of veterans and newcomers will need to work together in order to win races.

“It doesn’t just take one person for this sport,” she said. “It is a team effort, and I think the girls that I am privileged enough to get in a boat with are the epitome of an excellent team.”