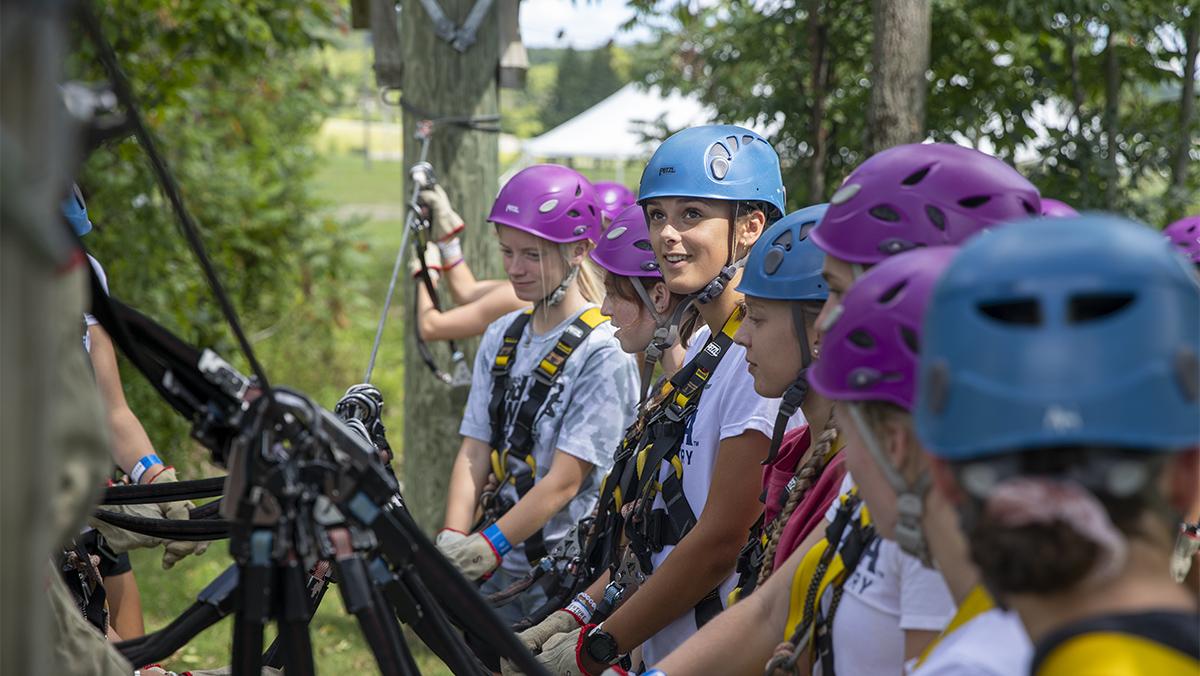 Despite its seemingly individual nature, the foundation of cross-country running is built on the collective score of a given team. As the Ithaca College women’s cross-country team prepares for its 2022 season, the team is looking to ensure it has the chemistry it will take to propel the team through the ranks.

As a precursor to its upcoming competition season, the team spent three days at Greek Peak Mountain Resort in Cortland, New York from Aug. 26 to 28, for a weekend retreat packed with adventure, fun, and most importantly: team bonding.

Sophomore Hannah Fichter said her experience with the team at Greek Peak was unlike any other bonding event the team has had, even though they spend plenty of time together during the competitive season.

“It was really nice because we’ve always spent a lot of time together, but we’ve never done a team trip like this in which we’re all sharing the same space and leaning on each other for that amount of time,” Fichter said.

Founded in 1958, Greek Peak is central New York’s largest four-season ski resort. Comprised of ski slopes, an indoor water park and an outdoor adventure center, the lodge provided all the amenities needed to get the team connected as they head into the season.

On top of the activities that Greek Peak had to offer, the team was also able to spend some quality time with each other outside of the scheduled events of the weekend.

Fichter said that, though the team had fun doing non-programmed activities like watching the “Barbie” movie together, she and her teammates learned new things about each other and strengthened their team bond through the experiences they had.

“I personally struggled a little bit,” Fichter said. “I have a fear of ziplines, so that was a really big thing for me. The ropes course really helped me to get over that fear. … It was really nice because I was leaning on one of my teammates who had a fear of heights. So we were just helping each other through it and it was really great to feel that kind of support.”

In addition to strengthening the bonds between returning team members, the retreat worked to integrate incoming first-year students and new cross-country runners into the team’s culture. Sophomore Carolina Cedraschi was a member of the college’s women’s soccer team for their 2021 season and has since began her transition into long–distance running.

Although a bit nerve-wracking, Cedraschi said she is excited to start this next chapter in her athletic career. Soccer and cross-country are very different sports, so switching between the two is something she said she needs to get used to.

“Transitioning from soccer to cross-country is definitely a huge risk and adjustment for me,” Cedraschi said. “This event, and different races to come, will definitely test my mental strength and see how far I can push myself.”

Unlike spring sports, fall sports have a very brief preseason window before official competition begins on Sept. 3 with the Jannette Bonrouhi-Zakaim Memorial Alumni Run, thus leaving less time spent with the team’s new runners. The team’s first preseason practice was Aug. 18, meaning it has just over two weeks to get ready.

In all competitive sports, the confidence needed to take risks is essential for success. Returning senior Ava Fowler said she was excited for how this could help the team chemistry heading into the season.

Fowler noted the unique nature of the retreat and how going into her final cross-country season as a Bomber will allow her to appreciate the event in its entirety.

“I think knowing this trip is a privilege will let us make the most out of it,” Fowler said. “It will definitely make us a stronger and closer team going into the season.”

Fowler continued to illustrate the importance of trust–building after the cancellation of the team’s highly-anticipated 2020 season because of COVID-19. As the squad was still riding the high of competing at Nationals in 2019, losing the following season was a great disappointment that robbed many young runners of crucial racing experience.

As the cross-country team grew more excited for their first official run approaching Sept. 3, they were eagerly looking forward to the adventures awaiting them at Greek Peak. Fichter said the mountain coaster was one of the most anticipated events, and it did not disappoint.

“There was one spot where [the coaster] snapped a picture of you, and it was really funny because we would all look at them after and pick on each other a little,” Fichter said. “It was just so much fun. … It was just really fun. So much fun, like, out of the park fun.”

With the season starting up soon and the school year about to kick into gear, Fowler said how important it was to her to get the most out of what the retreat has to offer.

“I am most looking forward to spending some quality time with the besties before school gets to be super stressful,” Fowler said.