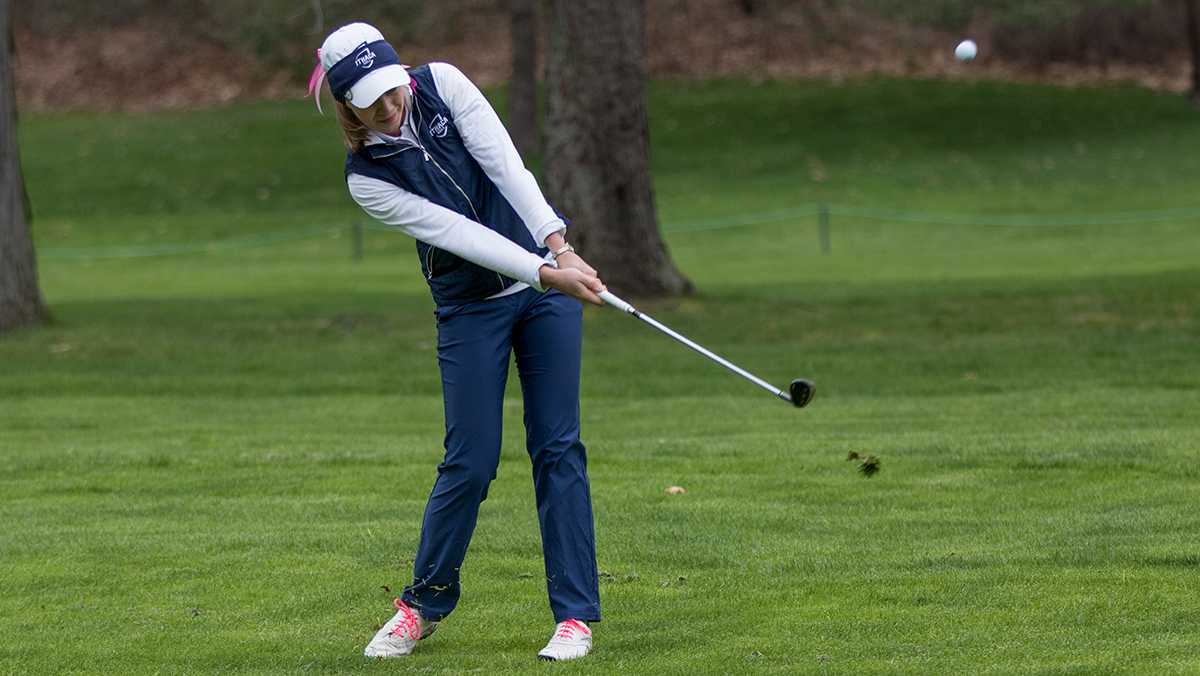 CAITIE IHRIG/THE ITHACAN
Junior Lauren Saylor hitting the ball on the green of the Country Club of Ithaca at the Ithaca College Invitational April 22–23. The Bombers placed second in the tournament behind Methodist College.
By Caitie Ihrig — Sports Editor
Published: April 25, 2017

The Ithaca College women’s golf team placed second with a total of 645 strokes for 69 over par in the Ithaca College Invitational at the Country Club of Ithaca on April 22 and 23. Methodist College took first place with 637 strokes to be 61 over par.

Junior Indiana Jones took home second place in the tournament. After day one, Jones shot a 79, which is seven over par. On day two, she was able to cut down her amount of strokes to finish the day at 75, three over par, for a two–day total of 154, which is 10 over par.

Taking third place was senior Kimberley Wong with a two-day total of 156, 12 over par. She finished day one with 74 strokes and day two with 82 strokes.

Finishing right behind Denish was freshman Peyton Greco in 11th place. After day one, she finished at 86, being 14 over par. Greco was able to shave two strokes off on day two to finish the day with 84 strokes to be 12 over par.

Senior Mary Rooker tied for 15th with junior Bri Sovring of SUNY Cortland with a two-day score of 178 to be 34 over par. Rooker finished day one at 93 strokes, which is 21 strokes over par. On day two, she shaved eight strokes off to finish the day at 85 strokes and 13 over par.

Junior Lauren Saylor and graduate student Colleen Vaughn both played as individuals in the invitational.

Saylor placed 21st with a total of 183 strokes to be 39 over par. She finished day one with 96 strokes, which is 24 strokes over par. Saylor was able to come back on day two, to finish the day with 87 strokes, 15 over par.

Vaughn finished in 34th place to be 72 over par with a total of 216 strokes. After day one, she had 105 strokes for 33 strokes over par. She concluded the tournament with 111 strokes on day two, which is 39 over par.