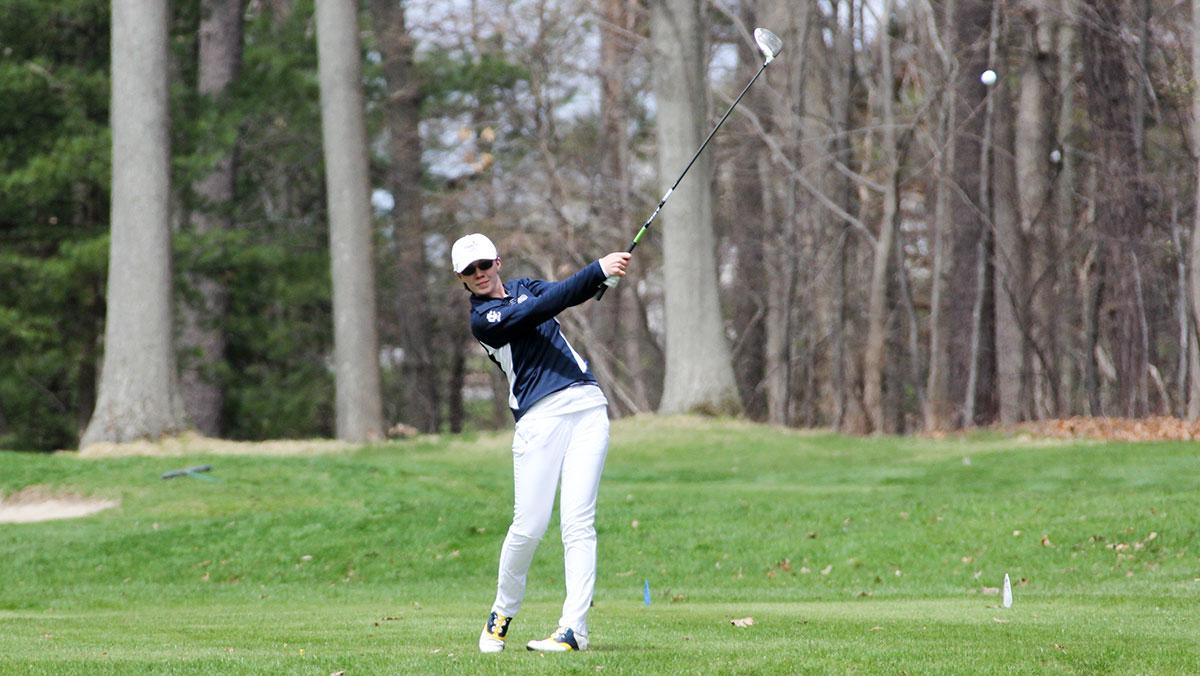 Caitie Ihrig/The Ithacan
Freshman Lauren Saylor of the women’s golf team uses her driver to tee-off during the Ithaca Invitational on April 26 at the Country Club of Ithaca in Ithaca, New York.
By Karly Redpath — Senior Writer
Published: April 29, 2015

Sharon Li was the last member of the women’s golf team to come into the clubhouse during the final day of play at the Ithaca College Invitational on April 26. Li’s ball sat just off the green as she grabbed a wedge from her bag while her coach, teammates and competitors looked on. She calmly approached the ball, taking two practice swings. Li envisioned her shot, took a step closer to the ball and made one last swing. Two putts later, she capped off the Bombers’ day with a score of 75 and finished with a two-day total of 149 to conclude their regular season with a victory.

Though the Bombers’ season finished on a high note, and the team is hopeful it will receive an at-large bid to the 2015 NCAA Championships in Howey-in-the-Hills, Florida, from May 12–15, the season was not always this steady.

Head coach Dan Wood said his team has had to face many obstacles this season. From the frigid weather in the second half of the season to the loss of sophomore Kimberley Wong and junior Taylor Reeves due to serious injuries, Wood said multiple factors have contributed to his team’s arduous journey this year.

“One of the biggest things we’ve had to deal with is losing two of our top-five players this spring,” Wood said. “We went from nine to seven, and thankfully the top five are playing well enough to keep us in contention.”

The Bombers’ top-two players, Li and senior Kelsey Baker, have been playing consistently all season and are not the only ones making contributions to the squad. Li recently qualified for her third consecutive invitation to the NCAAs as an individual. Baker said seeing her teammates make big contributions to the team’s play has shown their true characters.

“We’ve shown that we’re resilient,” Baker said. “This year we’ve had more girls have to step up and fill in a spot in the top five than ever before, and they’ve been amazing. It’s showing the depth of our team and how we can rely on one another.”

However, Wood said the biggest improvement this season has come from Taylor MacDonald. The senior had the best outing of her career April 18 when she shot a lifetime-best 79 to help the Bombers beat New York University by six strokes at the Jack Leaman Invitational. She also shot an 84 on the second day of competition at the Vassar College Invitational in Poughkeepsie, New York, on April 12.

All of these highlights, Wood said, have helped the team get a step closer to a potential bid to Nationals.

MacDonald was one of the five women who made the travel team. It was her first time getting to do so due to her choice to study abroad the last two springs.

She said her golf career at the college has been filled with highs and lows, but she values how much her coach has taught her.

“After everything, I can see that there has been this kind of spectrum I’ve been on, and it hasn’t been in the middle, it’s been one end or the other,” MacDonald said. “It’s so amazing to me that Coach was able to help me transition from a No. 7 player and get me ready to make contributions as the No. 4 or 5. It just shows how good of a coach he is.”

The Bombers’ record for the 2014–15 season stands at 82–5, defeating all the NCAA Division III teams they have faced, other than Williams College and NYU.

After registering five tournament wins, three second-place performances and one third-place performance, the Bombers are ranked No. 7 in the United States. The team sits at No. 1 in New York and No. 2 in the Northeast, behind Williams.

In 2014, the Blue and Gold received their first team invitation to the NCAA Division III Championship in program history, and Li was named the Division III Player of the Year.

Regardless, until May 4 when the NCAA announces its selections for the Division III Women’s Golf Championship field, Li and the Bombers can do nothing but wait.

Li said the highlight of her collegiate career came when she got to play alongside her teammates last May.

“Having the whole team make it to Nationals was one thing that was on my bucket list when I first came in,” Li said. “Playing as well as we did was all we could ask for really, and I’m hoping this year we have the opportunity to do it again.”