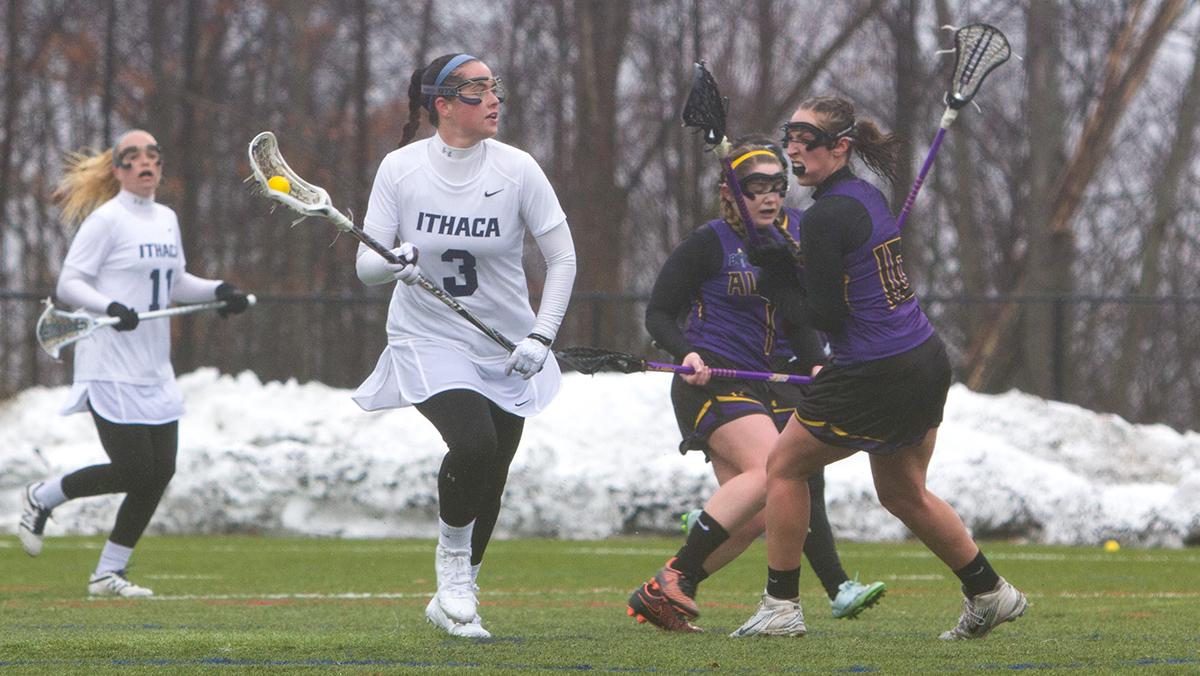 CAITIE IHRIG/THE ITHACAN
Senior attacker Morgan Racicot is looking to pass the ball to a teammate in the Bomber's 26–2 win against the Saxons at Higgins Stadium.
By Zoë Freer-Hessler — Staff Writer
Published: March 26, 2017

The game kicked off with a goal by graduate student attack Ally Runyon, immediately followed by a goal from junior midfielder Gaby Berne, assisted by senior attacker Morgan Racicot.

After a foul on Saxons’ senior attacker Jaquelynn Hicks, the Bombers took a free-position attempt, which was followed by a foul on Racicot.

Racicot scored her first goal of the game followed by junior attacker Allison Panara shooting and scoring with a free-position attempt. Immediately following this, sophomore attacker Elizabeth Rice scored twice, bringing the score up 5–0 for the Bombers.

After a save by junior goalkeeper Kimberly Presuto, senior midfielder Olivia Oppenheim scored, bringing the score up again for the Bombers.

The Saxons called a timeout with just under 10 minutes into the game. Rice and Bomber freshman attacker Bailey Herr each scored goals after resuming play.

Several unsuccessful attempts were made by Alfred, followed by their second goal of the game made by junior defender Emily MacWilliams. Panara scored again, bringing the score 11–2.

In the last 10 minutes before halftime, Cadwell, Racicot, Berne and sophomore attacker Danika Wagener all scored goals, followed by another goal from Runyon and another from Oppenheim with an assist by freshman attacker Erika Fortune. Halftime was called, with a score of 17–2 to the Bombers.

Bombers’ senior Emily Ross took over goalkeeping, and two minutes into the period Racicot lost control of the ball long enough for the Saxons to miss a shot. Racicot then regained the ball and Runyon scored with an assist from Racicot.

Fouls on both Runyon and Racicot gave Alfred the ball before it was quickly scooped up with an attempted and failed shot from the Bombers. Freshman midfielder Katie Welch scored her first goal of the season, bringing the score up 19–2.

The Saxons gained the ball and attempted a shot, losing the ball to Welch before a goal from Herr. Following this, timeout was called by Alfred and Cadwell scored when play resumed.

Alfred gained the ball and made a clear attempt, failing the shot. The Bombers regained the ball, with senior midfielder Taylor Brady making a shot that was saved by Saxons’ junior goalkeeper Shannon Gray.

Oppenheim scored with an assist from Brady, and Cadwell scored unassisted, bringing the score up 25-2 to the Bombers.

With four minutes left on the clock, turnover caused by Alfred resulted in a failed attempt by the Bombers before the last goal of the game, scored by sophomore attacker Maeve Cambria.

The Bombers play next against Elmira College at 4 p.m. on March 28 at Higgins Stadium.