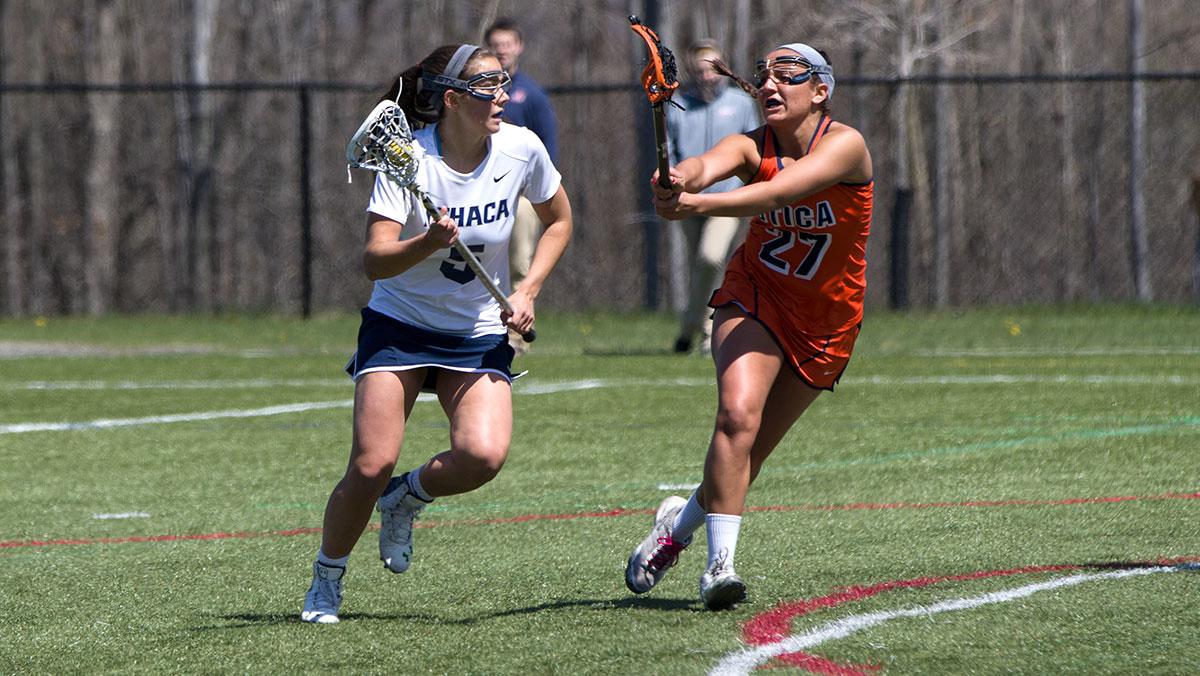 The Ithaca College women’s lacrosse team strengthened its hold on the top spot in the Empire 8 Conference with an 18–2 win over Utica College on April 24 at Higgins Stadium.

The win puts the Bombers in sole possession of first place, with just one regular season matchup remaining against No. 20 St. John Fisher College. With a win against the Cardinals, the Blue and Gold will claim the regular season title and host the Empire 8 tournament on May 7–8.

This game marked the second straight victory with at least a 15-point goal differential for the Bombers, who were coming off a 23–1 thrashing of Alfred University.

Junior attackman Morgan Racicot scored six goals with one assist on the afternoon, while junior attackman Gaby Berne and freshman attackman Danika Wagener each netted three goals, moving the Bombers to 11–4 on the season and 7–0 in the Empire 8.

The Bombers had the upper hand in the face-off department, winning 14 of 23 draw controls against the Pioneers, who fell to 9–6 on the season with the loss.

The South Hill squad was solid on the defensive end as well, forcing 10 turnovers on the afternoon. Freshman midfielder Julia Silvestri caused three of those along with three groundballs, while sophomore defenseman Elizabeth Sauer picked up four groundballs of her own.

The Bombers maintained a sizable lead throughout, but locked down Utica in the second half, leaving the Pioneers scoreless for a time period of 35:12.

The win was the Bombers’ sixth in their last seven games, and sets up the regular season finale and their Senior Day, at 1 p.m. April 30 in Higgins Stadium against St. John Fisher College.