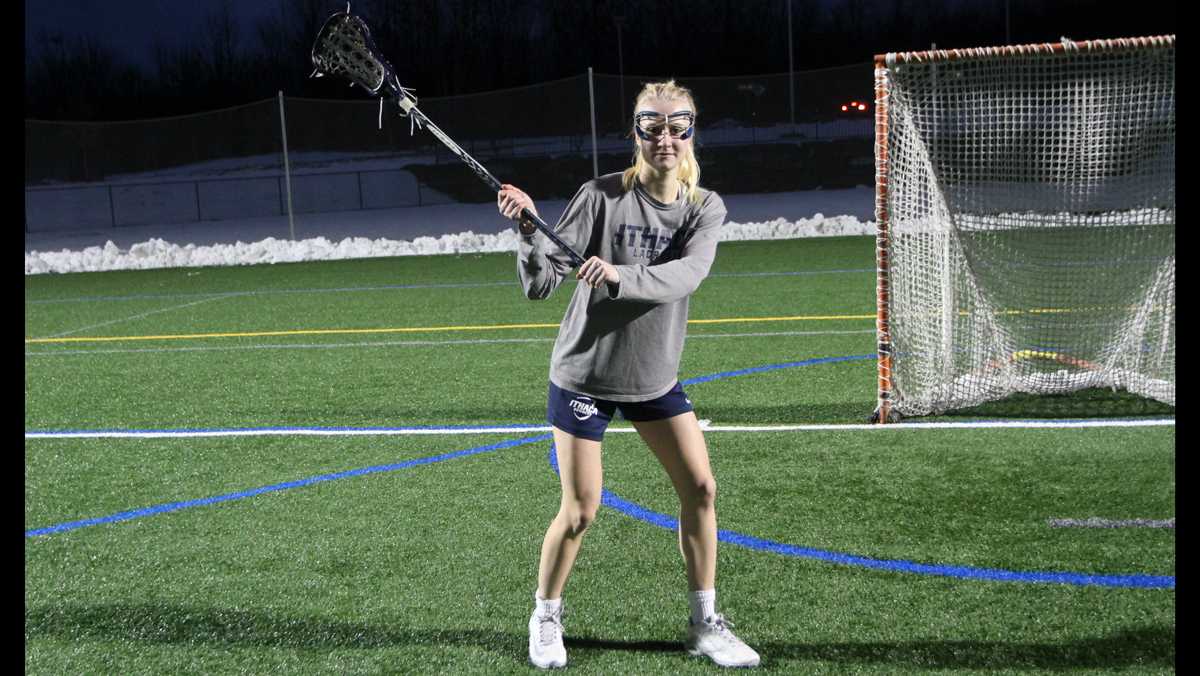 During its past two seasons, the Ithaca College women’s lacrosse team has secured 14 wins in each season and back-to-back appearances in the NCAA tournament. Going
into the 2018 season, the Bombers are projected to finish second in the Liberty League Conference by the conference’s coaches.

Head coach Karrie Moore, hired in 2015 as the 11th coach in the program’s history, was at the heart of this improvement. 2018 will mark her third season at the helm as she looks to maintain the electric pace set by her two previous teams. The Intercollegiate Women’s Lacrosse Coaches Association has the Bombers ranked at No. 11 in its 2018 preseason poll.

“The ranking was exciting,” Moore said. “We have some strong goals we want to accomplish, and that ranking is a step in that journey.”

Part of the journey this season will also involve replacing Ally Runyon, the First-Team All-American attacker, who graduated last year. Runyon left as the program’s all-time record holder for both goals and points.

“More than the points, she was so reliable,” Moore said. “Different people will step up, and we’ll score the goals, but a lot of that is being able to rely on someone who just competes in every moment.”

The team will look to junior attack Allie Panara to pick up some of the slack. Panara is a newly minted captain who finished second on the team in scoring a season ago with 34 goals, 32 assists and 66 points.

“I think that there’s a new opportunity this year to play a little bit of a different role, more of a leadership role,” Panara said. “We have a lot of talented players still coming back that are going to be a huge part of the team, and a lot of the newcomers are going to step upand fill those shoes as well.”

Leading the way for the Bombers is seniordefender Molly Long, who was an Empire 8 All-Conference First-Team and IWLCA All-Region First-Team selection in 2017. She also had a team-best 37 ground balls, while finishing second on the team in forced turnovers with 27.

“I’ll consider this season a successful one if by the last game, we are a complete unit that has grown throughout the year from start to finish,” Long said.

Long is a key member of a formidable defense, including sophomore Becky Mehorter, junior Reid Simoncini and senior Liz Sauer, that held its opponents to under five goals five times in 2017. Senior goalkeeper and IWLCA All-Region selection Kimberly Presuto will also be back in net this year for the Bombers. The defensive familiarity looks to be a big advantage for the upcoming season.

“It’s an awesome feeling, with incredible freshmen and underclassmen on defense,” Long said. “We’re coming in pretty confident. We know we all have each other’s backs, and it’s a pretty united defensive unit.”

The Bombers’ biggest challenge in the Liberty League will be William Smith College. The Herons have won back-to-back conference championships and were voted to win the league again in the 2018 Liberty League Women’s Lacrosse preseason poll.

“One of the big games on our calendar is William Smith,” Panara said. “They were ranked in the top 10, and that’s going to be a huge game for us, not only in the regional rankings, but also because now they are in our league.”