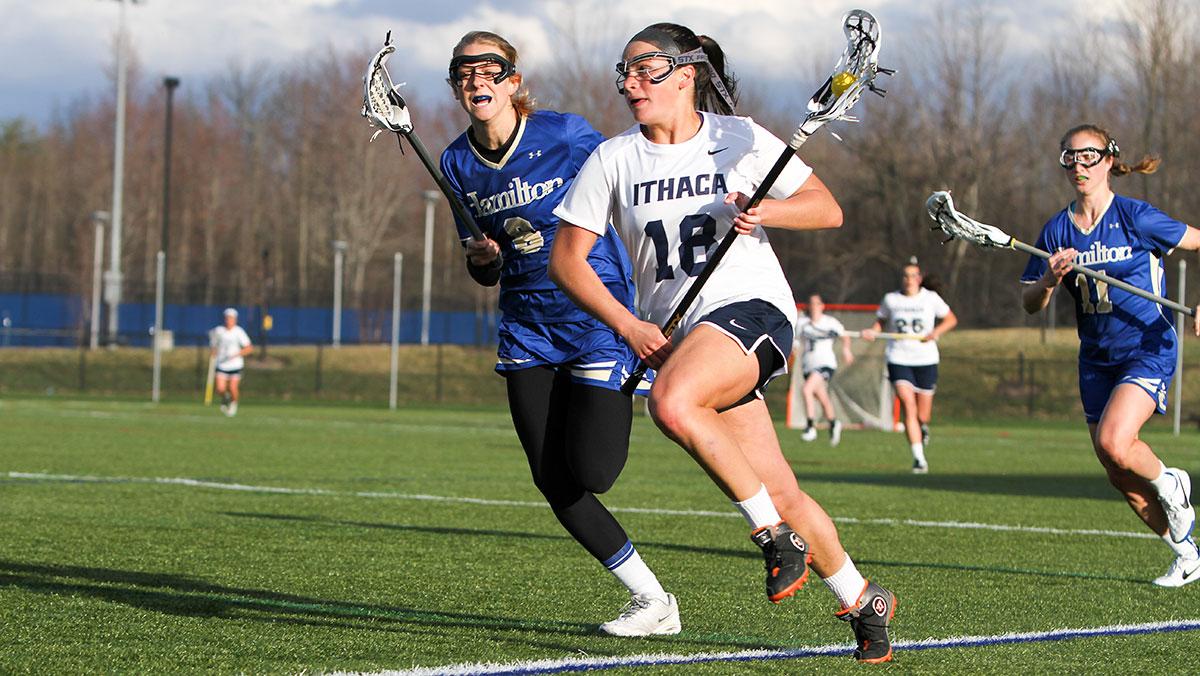 After winning its last six of seven games, the members of the women’s lacrosse team knew all they needed to do was make the playoffs, and they would have a chance. That’s exactly what they will be hoping for when they begin their quest for the Empire 8 Championship on May 2.

After going three straight seasons without a regular-season conference loss, the Bombers suffered two defeats to Empire 8 foes this season, giving them a fourth-place finish in the conference standings.

Nevertheless, the South Hill squad finished with a 10–7 record, making this its sixth consecutive season with double-digit victories. The Bombers ended their regular season on a high note, including a 9–8 win over No. 7 Hamilton College in the team’s final home game April 21.

The Bombers had to overcome a major injury this season as sophomore starting goalie Emily Ross was forced to sit out four straight games during the month of April, pressuring the team to utilize freshmen Kimberly Presuto and Kelsey Fee as a platoon.

Ross said the win against Hamilton gave the team the type of momentum that will carry it come conference tournament play.

“It definitely gave us a lot of confidence and helped us realize we’re still in,” Ross said. “Although we had a tough season, unlike other seasons, we can still come back and push our way to the top.”

Senior midfielder Natalie Lang said despite losing two conference games during the regular season, the postseason represents a new year for the Bombers.

“I think this regular season proved to us that anything could happen,” Lang said. “The four Empire 8 teams that are in the tournament all have at least one loss in the conference, and that loss is to another team in the tournament.”

In the team’s final regular season game, the Blue and Gold visited Utica College to decide who would receive the final spot in the Empire 8 tournament.

In a back-and-forth contest, the Bombers and Pioneers found themselves deadlocked with 18 seconds left of play. Sophomore midfielder Morgan Cadwell scored to put the Bombers ahead by a score of 10–9 and allowed the team to clinch a spot in postseason play with the win.

Senior attacker Emily Peters, who scored a season-high three goals in the win over Utica, said the victory showed off the team’s determination to make the postseason.

“I think we’re peaking at the right time,” Peters said. “I really think that our character is really strong because we had to earn our spot. We didn’t walk into this, we had to fight for our spot, and it gives us an edge to fight for the championship.”

Although the team has made the postseason, this season marks the first time the Bombers will not host the conference tournament since 2011. In the past three campaigns, all at home, the Blue and Gold have made it to the conference championship, losing to St. John Fisher College each year.

Despite not playing on the friendly confines of Higgins Stadium, Lang said the team has no concerns about taking its talents on the road.

“I don’t think it matters where we play the tournament,” she said. “To win this conference tournament, we need to stick to our game plan and play as a team. We can do this on any field.”

The Bombers join St. John Fisher, Stevens Institute of Technology and Nazareth College as the teams that qualified for the Empire 8 playoffs. The Bombers lost to Fisher 13–6 March 21 and suffered a heartbreaking 14–13 double-overtime defeat to Stevens on April 4. However, the women cruised past Nazareth by a score of 16–6 April 11.

Ross said the experience of playing their conference foes in the regular season will only benefit the Bombers in postseason play.

“Each team is different, but we understand how to play them,” she said. “If we just go on with the level we can play at, we should have no problems beating them.”

The Bombers will be looking to do something the program hasn’t accomplished since 2011 — reach the NCAA tournament.

Peters said it’s a goal that will serve as extra motivation in the days leading up to the conference tournament.

The Bombers begin postseason play with a game against the tournament’s top-seeded Nazareth Golden Flyers on May 2.

This year the squad will enter as the underdogs of the weekend, a role that Lang said the team will relish.

“Some of our best games this season, as a team, have been against nationally ranked teams,” she said. “Our team tends to embrace the underdog role when we are put up against teams who are perceived to be better than us.”