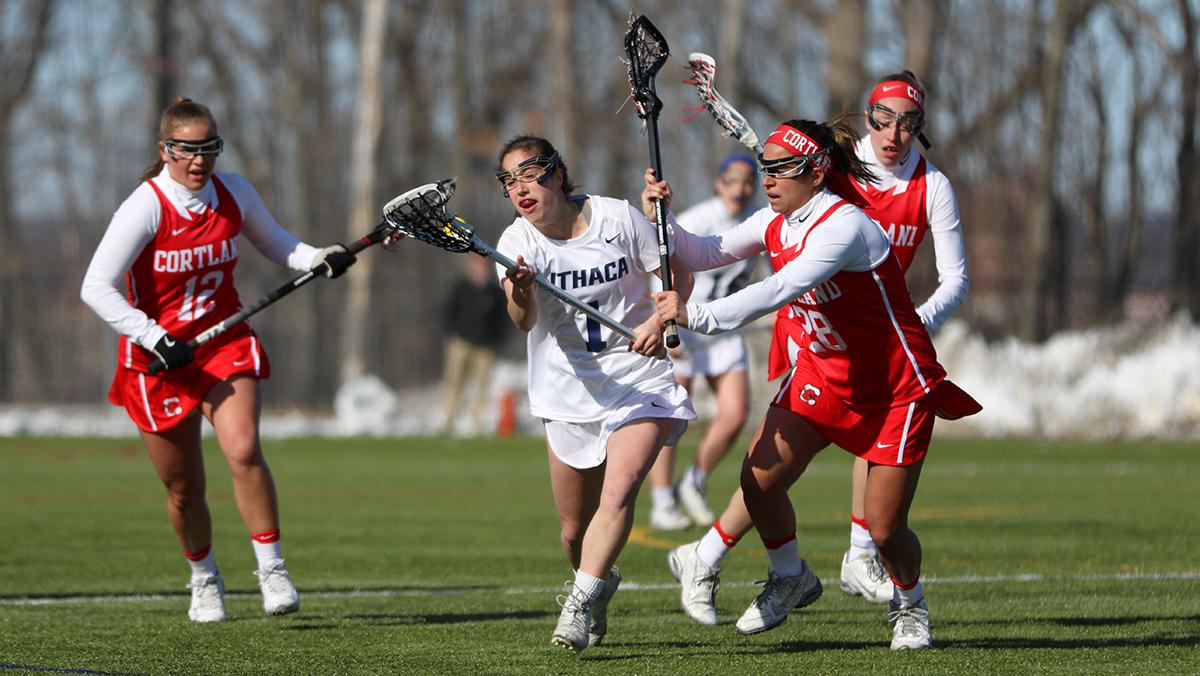 MANYA MARGOT/THE ITHACAN
Sophomore attacker Maeve Cambria looking for a way to get around freshman defender Kate Gibson and score in the Bombers win at home against Elmira College 18–0.
By Zoë Freer-Hessler — Staff Writer
Published: March 28, 2017

On March 28 the Ithaca College women’s lacrosse team faced and defeated Elmira College on home turf at the Higgins Stadium, 18–0.

After two goals from Panara, Elmira called a timeout just 10 minutes in. After play resumed, McGee scored unassisted, followed by a goal from Runyon with an assist from Racicot.

With the Bombers still staying strong and working hard to keep up their streak, senior midfielder Olivia Oppenheim scored unassisted, followed immediately by another unassisted goal from freshman attacker Bailey Herr. A goal from senior midfielder Morgan Cadwell goal with an assist from freshman attacker Erika Fortune put the Bombers up 12–0 with 15 minutes left in the first half.

After two unsuccessful attempts by the Soaring Eagles, Herr scored again with an assist from Berne. McGee scored again, this time assisted by Racicot, put the Bombers up again. After a foul on Soaring Eagles’ freshman defender Kayla Cutting, Runyon scored with a free position goal.

A goal from Berne assisted by Racicot closed the first half, with the Bombers up 16–0.

The second half opened with senior Emily Ross at goal for the Bombers. Several turnovers and unsuccessful attempts were made by both teams before Fortune made her first unassisted goal of the season.

After Elmira made an unsuccessful shot saved by Ross, the Soaring Eagles called another timeout. With seven minutes to go, sophomore attacker Danika Wagener scored with an assist from sophomore attacker Elizabeth Rice, finishing the game with 18–0, to the Bombers.

The Bombers next game will be held at 3 p.m. April 1 in Rochester, New York against St. John Fisher College.