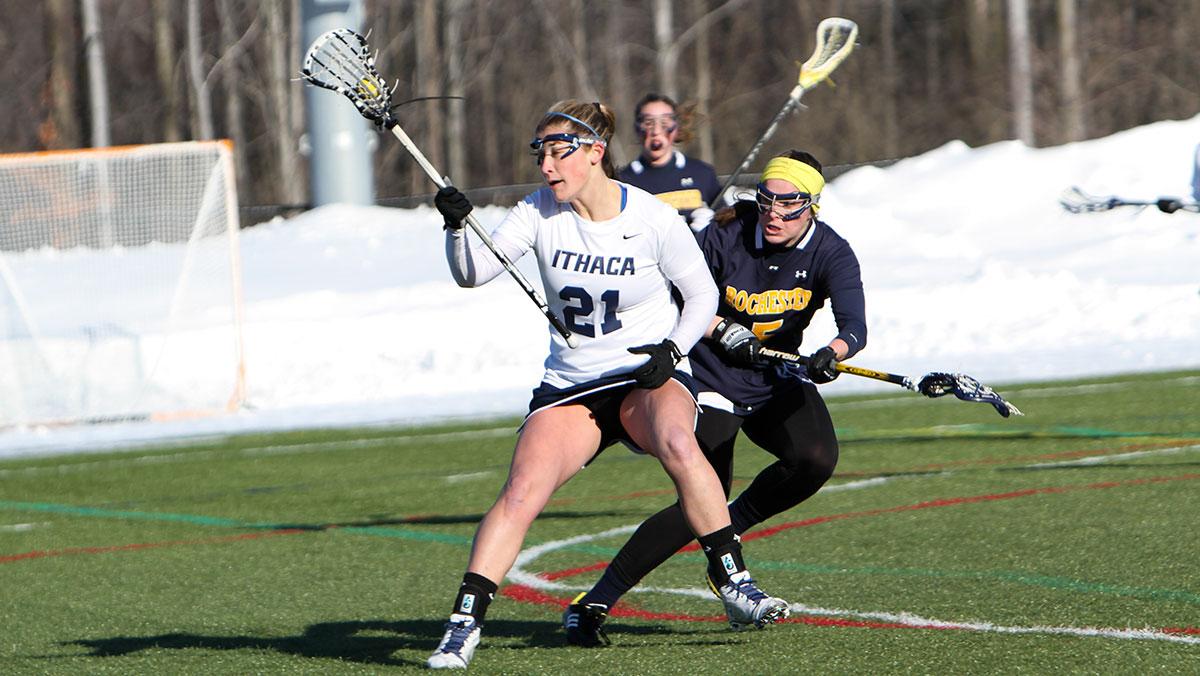 Many athletes would argue that the days and weeks leading up to the start of their season, full of two-a-day practices and fitness tests, are the hardest. Ask members of the women’s lacrosse team, however, and they’ll say the difficult part of their season is just about to begin.

After opening the season with a win against the University of Rochester on Feb. 28, the Bombers will face a daunting task within the span of 11 days. It’s a schedule that includes two games against two of the top-15 teams in the nation and another versus an opponent who posted double-digit wins last year.

The brutal week and a half begins with a road contest Mar. 7 against York College, which ranked No.13 in the preseason Intercollegiate Women’s Lacrosse Coaches Association poll. The Spartans also made it to the Sweet 16 in the NCAA tournament last year, defeating the South Hill squad’s rival St. John Fisher College in postseason play.

The Blue and Gold will then take their talents to the Sunshine State where they will play in an annual round-robin series of games over spring break in Clermont, Florida. There, they’ll face off against Gettysburg College, an Elite Eight team from a season ago, just two days after their game against York. The Bullets were ranked sixth in the IWLCA preseason poll.

Following a second game in Florida against Dickinson College, the Bombers will finally come home to the friendly confines of Higgins Stadium, where SUNY Oneonta will be waiting for them. Despite not making the NCAA tournament last season, the Red Dragons finished the year with 12 wins before losing to eventual national semifinalists SUNY Cortland in the State University of New York Athletic Conference semifinals.

Senior attacker Emily Peters said the Bombers are looking at that stretch as business, though part of the series will encompass a spring break in Florida.

“I think it’s a good preseason motivator,” she said. “We play really good competition, so I think that the warm weather and no snow only helps our focus that we’re able to get more done in a two- or three-hour practice down there than we do in an hour practice here. I think we’re definitely there to prove ourselves in terms of top-20 women’s Division III lacrosse.”

Having played both York and Gettysburg last season, the Bombers are familiar with tough competition. In fact, junior attacker Ally Runyon said they relish it.

The team suffered a close 14–12 defeat at the hands of the Spartans last year, while enduring a heartbreaking 13–12 double-overtime loss to the Bullets just five days later. However, Runyon, who was last year’s leading scorer, said those are the games that make the team better at the end of the day.

“Those games are definitely learning experiences, and it opens it up to what we would see if we were to win E8s,” she said. “It’s preparation and it teaches us for later on in the season.”

“Playing these [strong] teams, and keeping up with them, shows that we’re nothing less than them,” she said. “[Out-of-conference] games allow us to push our limits for the conference games. Because we know we’re playing such challenging teams, we can find out where our strengths really lie.”

However, the tough schedule in the opening weeks of the season does not just benefit the team later in the spring. Rather, Peters said it helps maintain the competitive nature and focus among the student-athletes during the repetitiveness of preseason.

“We know that we have to make the most out of every minute that we get,” Peters said. “We can’t ease into the season. We want to make a statement early on.”

Runyon agreed with her teammate and said games against ranked opponents help to serve as an early dose of incentive for the team.

“They are always challenging games and we show up very focused because we know we can stick with them,” she said. “[Those games] make us have extra motivation and have us win even more.”