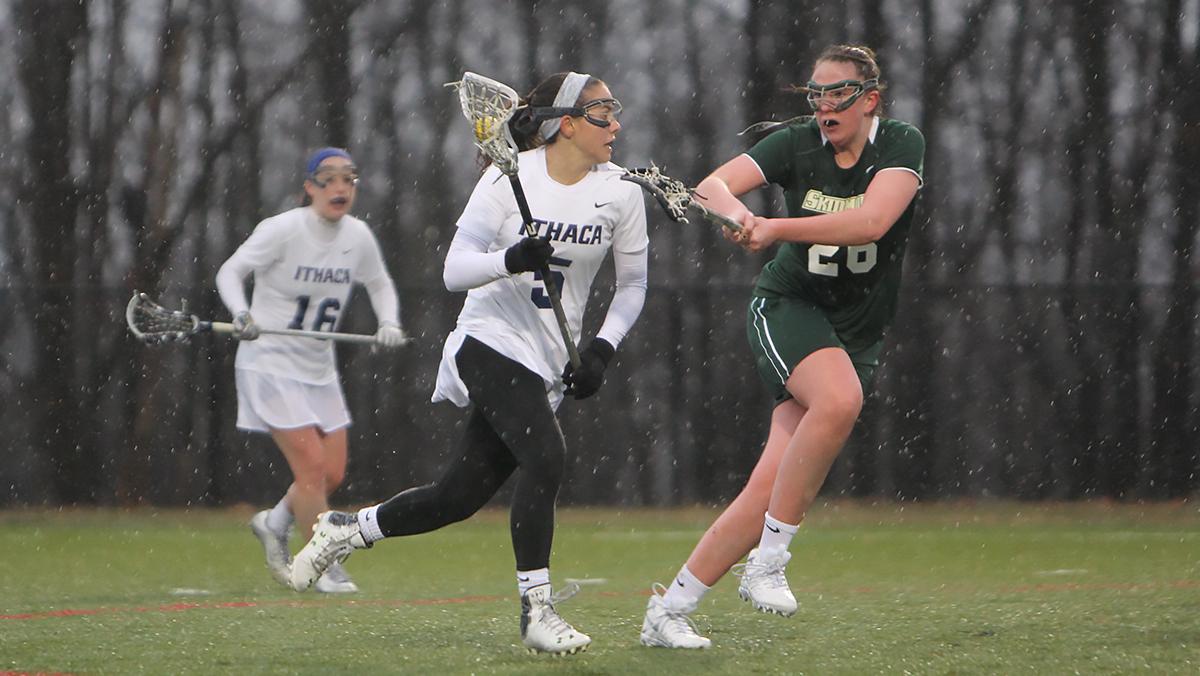 “It’s the season opener, so we just wanted to put everything we’ve been working on these past four weeks and showcase it, I guess,” Long said. “We were really pumped to go out.”

The Bombers scored the next two goals of the game. Sophomore attack Danika Wagener scored an unassisted goal, and followed it up by assisting freshman attack and midfielder Bailey Herr with the next goal.

Skidmore senior attack and midfielder Allison Byrne scored an unassisted goal, bringing the score even at 3–3.

Racicot scored a goal with an assist from sophomore midfielder Allison Panara. Following this, senior midfield Morgan Cadwell attempted a free position goal, bringing the score up 5–3 for the Bombers.

Skidmore’s Szwajkowski was next to shoot a goal, scoring her third of the season. Skidmore called a timeout just before halftime, and Szwajkowski scored another goal with six seconds left on the clock, leaving the teams tied.

The second half opened with a goal from a goal from Runyon assisted by Panara, followed by an unassisted goal from Szwajkowski. Runyon attempted another shot, but it was saved by Skidmore freshman Caroline Kenlon.

Both Runyon and Panara scored unassisted goals, followed by goals from Skidmore freshman Amanda Orvis assisted by sophomore Natalie LaBeau, and a goal from LaBeau. The Bombers took the next three goals.

Szwajkowski shot the final goal for Skidmore, and the game ended with a goal from Cadwell, leaving the final score at 12–9 to the Bombers.

“It’s great to start with a tough competition, and jump in right away,” head coach Karrie Moore said. “The first game always teaches things you can apply later. We played tough today, and it isn’t always pretty, but we made it work.”

Skidmore was ranked second last season, and the Bombers had to work hard to beat them. The Bombers will continue working hard at practices and games, and the win helped them continue to be optimistic about the season.

“I think we’ll keep building on what we’ve learned,” Runyon said. “We don’t want to take any steps back, and in preseason we work on our fundamentals, like offense and defense skills, and I think that once we start being able to add more things we’ll just be a team that won’t be able to be stopped because we’ll just be so versatile. We already have a head start on that this year, farther than we did last year, so I think that we can just go so far.”
The South Hill squad competes next against St. Lawrence University at 1 p.m. March 4 in Canton, New York.