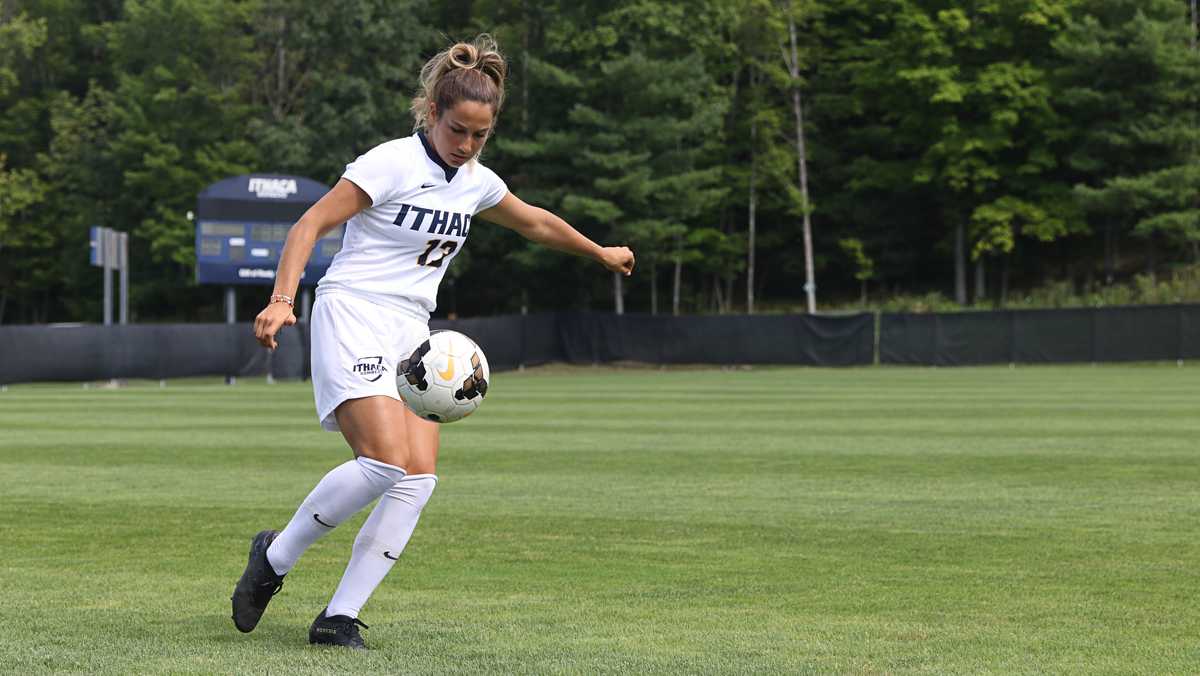 Molly Bailot/The Ithacan
Junior midfielder Gabriella Mihale was named to the United Soccer Coaches All-East Region Third Team in 2018, and she will be a key contributor for the Bombers this season.
By Ariel Dowdy, Emily Adams — Staff Writer, Sports Editor
Published: August 29, 2019

With 14 wins and a trip to the NCAA regional championship game, 2018 was one of the Ithaca College women’s soccer team’s best seasons in recent years.

Last year’s team rebounded from the program’s first-ever losing season in 2017. The Bombers had three athletes selected to All-Liberty League teams in 2018, and head coach Mindy Quigg and her staff earned Liberty League Coaching Staff of the Year honors.

The Bombers graduated six seniors last season and will feel the loss, especially on the defensive end. Sam Robinson ’19 and Reid Garner ’19 started all 20 games last season on the back line, and Garner was named to the United Soccer Coaches All-East Region Team.

What the squad lacks in veteran defenders will be compensated by offensive strength. The South Hill squad returns almost its entire midfield and attack, including stand-out scorers in team captains junior Alex Epifani and senior Gabriella Mihale. 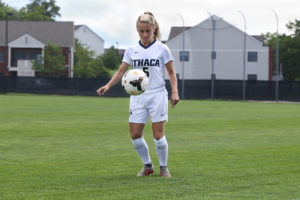 leading scorer with nine goals. Mihale was the second-best scorer with five goals and was named to the United Soccer Coaches All-East Region Third Team.

With 15 freshmen expected to try out for the squad, Epifani said team bonding will be a big part of the season.

“Our team has a huge focus on our bond together,” Epifani said. “That’s why we always work so well — because we know each other as a person and as a player.”

Mihale said that preseason provides a crucial opportunity for the team members to connect with each other on and off the field.

“For two weeks, we’re with each other basically every day,” Mihale said. “We go to breakfast, lunch and dinner together at the dining hall. We do a lake run and then we have breakfast together on the lake. We do little activities where there is time for us to get a good idea of each other’s personalities.”

Mihale said that because of their large incoming class this year, the Bombers are emphasizing leadership and flexibility in the team’s mentality.

Mihale also said the South Hill squad is putting a strong focus on improving its fitness and endurance for the season. She said some of these fitness tests include the beep test, a 300-yard test and a 100-yard test. When preseason begins in the fall, every player has to meet certain standards in every test to make the team.

Quigg enters her 26th season as the women’s soccer head coach this year. She said the squad’s schedule this year will provide an excellent challenge throughout the season.

“We are looking forward to every match on our schedule,” Quigg said. “We have a strong and competitive nonleague schedule, and the competition in the Liberty League is some of the best in the country.”

Liberty League opponent Hobart and William Smith College is ranked fifth in the country on the United Soccer Coaches preseason poll, and Rochester Institute of Technology did not make the top 25 but received votes. The Bombers will also compete against the Endicott College Gulls in a nonleague matchup. The Gulls are the preseason favorite to win the Commonwealth Coast Conference this year.

The Bombers will kick off their season at 4 p.m. Aug. 30 against Endicott College in Beverly, Massachusetts.