Women’s soccer seeks to score the ultimate goal this season 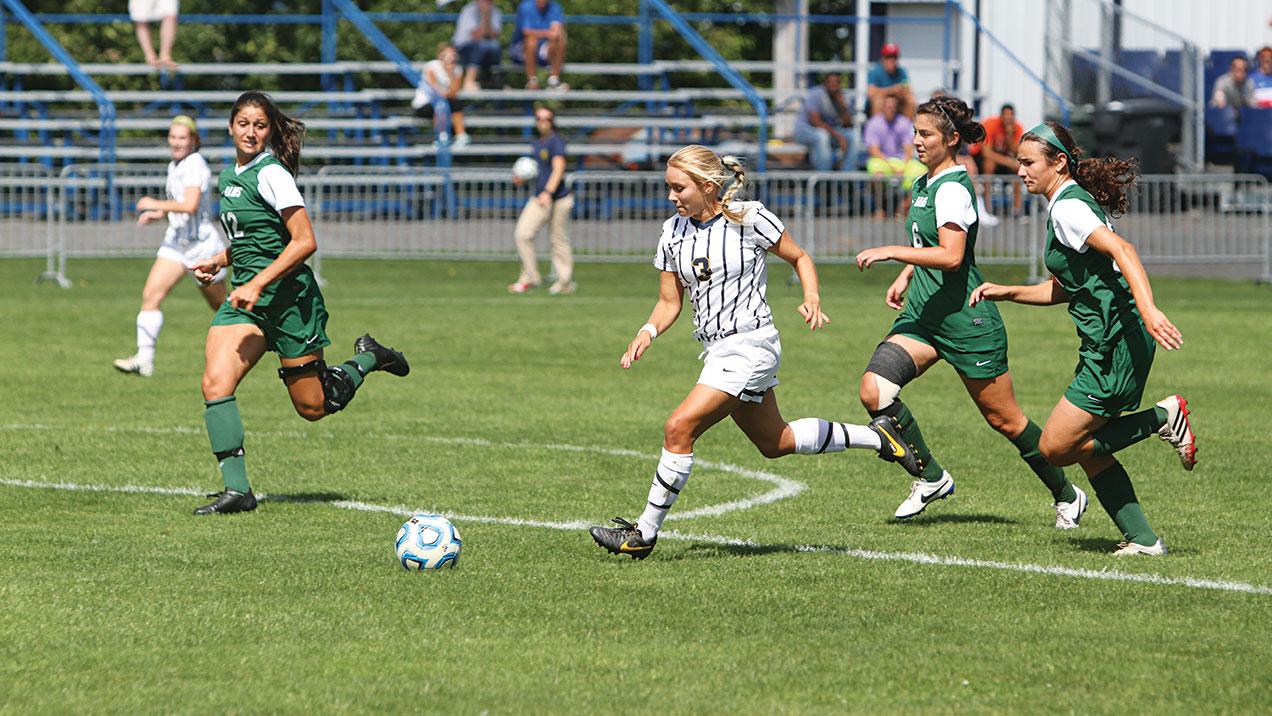 Last season, the women’s soccer team ended its year at the hands of the eventual runner-up, Williams College, in the second round of the NCAA Tournament last November, finishing with a record of 15–4–1. Having only lost two seniors to graduation, the team will be able to utilize a core of experienced returners to get into a rhythm early on and come out this year stronger than ever.

The Bombers are ranked 25th by the NCAA in this year’s preseason poll, comparatively, they were ranked fifth heading into the 2014 season. However, head coach Mindy Quigg said this ranking does not affect the team or its mindset approaching the upcoming season.

“Right now, we are going to focus on getting through preseason and taking everything one day at a time,” Quigg said. “The only ranking that matters to us is the one when the regular season comes to a close.”

Although the Bombers only lost two seniors, Kelly Pantason ’15 and Jessie Warren ’15, assistant coach Carrie Bonus left her position to go to Onondaga Community College. She will be replaced by former standout player Ellyn Grant-Keane ’14. During her time at the college, Grant-Keane played in 85 games and recorded 72 points, which tied her for ninth in program history.

“She’s familiar with our style of play and will bring a whole new energy to our program and team this season,” Quigg said.

At the forefront of the offense is senior forward Kelsey King. King started all 20 games for the Bombers in the 2014 season and recorded a team-high 14 goals. This was also the second-straight season she was named to the All-Empire 8 First Team.

King said the upperclassmen know what is expected of them and try to lead by example and give everything they have every day. 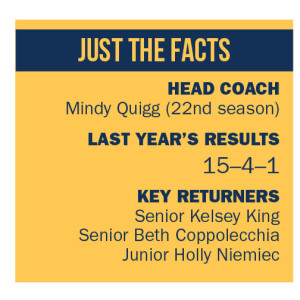 “As a forward, it’s my job to get goals and assists, and I work my hardest to get the job done in any way I can,” King said.

King, alongside seniors Sarah Woychick and Beth Coppolecchia, will look to develop into strong leaders this season. Quigg said this enables the coaching staff to look to rising players to fill key roles and be vocal on the field.

One player who has stepped up to the pitch is junior forward Holly Niemiec. Niemiec also started all 20 games for the Bombers and registered a team-high eight assists last season.

Niemiec said the team is trying to silence all of the doubters this season after losing in the second round of the playoffs last year.

“I think the best way to describe my feelings for this season is excitement,” Niemiec said. “I really see the potential in this team to succeed, and I think we’ve all been waiting to prove that since our season ended last year in November.”

Niemiec said the team’s strong point this season is to work hard every day by putting in extra time and pushing one another to strive to be the best.

“It’s these little things that are going to give us the edge on our competition this season,” Niemiec said.

Quigg said aside from the powerful offense provided by the forwards, the team will also be very strong with Coppolecchia in net and in the backfield due to the players’ experience.

King said, having fallen early in the NCAA Tournament last season, the team is looking to pick up where it left off and to advance further in the postseason.

“We didn’t make it as far into nationals as we would’ve liked to last year,” King said. “We are returning a lot of players, so we have an advantage there.”

This season, in order to advance further in the tournament, Quigg also said the team will need to focus on quicker touches on the ball and faster decision–making.

“It’s an interesting group of first-years,” Quigg said. “We have 12 first-years trying out and two transfers. I hope that they will be able to jump on board quickly into our philosophy and team style.”

The Bombers open up their season at home against the Keuka College Wolfpack at 4 p.m. Sept. 1 at Carp Wood Field.

King said the returning team is very excited to see what the freshmen will be able to add to the team’s chemistry.

“The freshman class is always a huge part of the team, on and off the field,” King said. “They bring new energy and excitement to the team. Every one of them brings new skills to the field that enhance us overall as a team.”