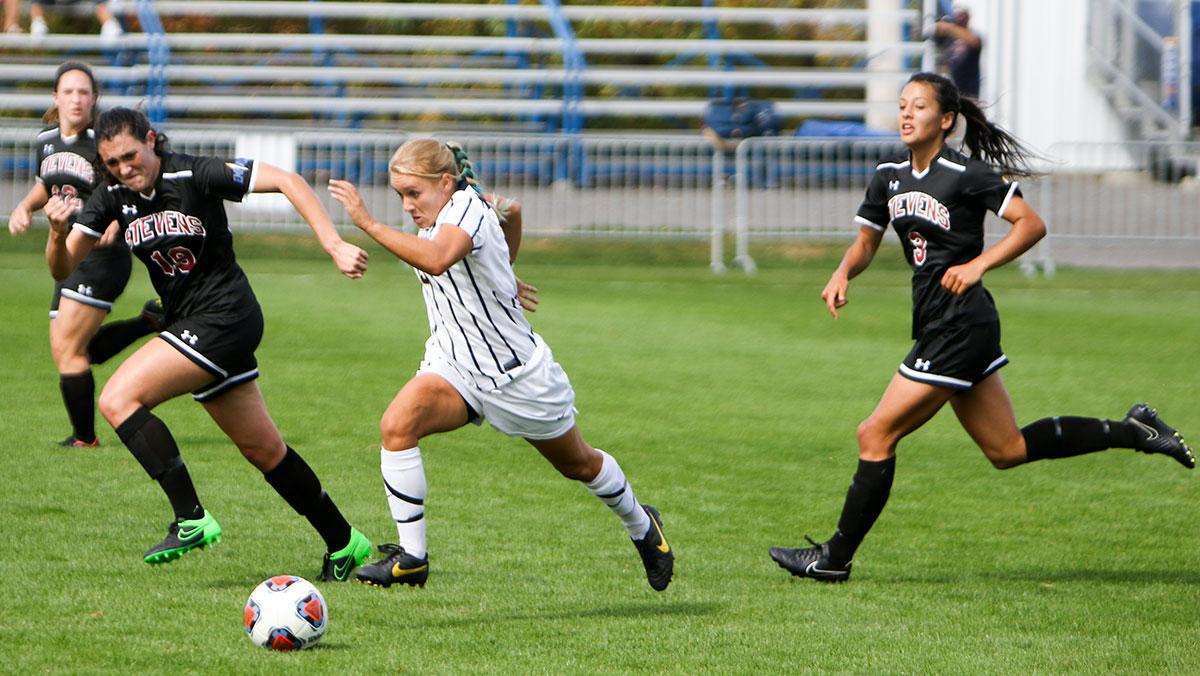 On a sunny, warm afternoon at Carp Wood Field, the Ithaca College women’s soccer team took on Stevens Institute of Technology, ending with a 1–1 tie after 110 minutes of play.

The South Hill squad has been in an offensive rut, losing three games prior to its matchup against the Ducks.

The match started off strong with both teams’ attempting to make shots. At the six-minute mark, Stevens forward Zisi Komar attempted to make the first goal of the game but failed to hit the back of the net. Senior forward Sarah Woychick had a close call at 11 minutes of play, almost succeeding in making a goal, but kept the score at 0–0.

After the first half of the game, the score remained 0–0 with the Ducks’ holding a 6–4 advantage in shots on goal.

Both the Bombers’ and the Ducks’ defense dominated the first half the game.

Junior forward Megan Nash said she felt the team was stronger in the first half of the game.

“I think that when it comes to our practices this week, we need to push each other and keep each other accountable of this week so that we come out harder in the second half in our next game,” Nash said.

At 54 minutes into the second half, the Ducks had a chance to take the lead with a penalty kick but did not succeed, sailing the ball wide off the side of the goal. The score remained 0–0 until 59 minutes on the clock when Stevens junior Gabby Mathelier made the unassisted first goal of the game to put the Ducks up 1–0.

With 14 minutes left on the clock, senior forward Kelsey King was successful in hitting the back of the net with a penalty kick, tying the game once again at 1–1.

The goal was King’s fifth goal of the 2015 season.

The game remained the same until the end of regulation. The game headed into double overtime but ended with a final score of 1–1.

The Ducks attempted eight shots during double overtime, but Bombers goalie Beth Coppolecchia prevented the ball from hitting the back of the net.

Despite ending in a tie, junior forward Holly Niemiec said the Bombers pushed themselves on the field from beginning to end.

“Stevens is a great team, but I think we were the better team today. We just didn’t capitalize on our opportunities,” Niemiec said.

The Blue and Gold will play the Hartwick College Hawks at 5 p.m Sept. 30 in Oneonta, New York.