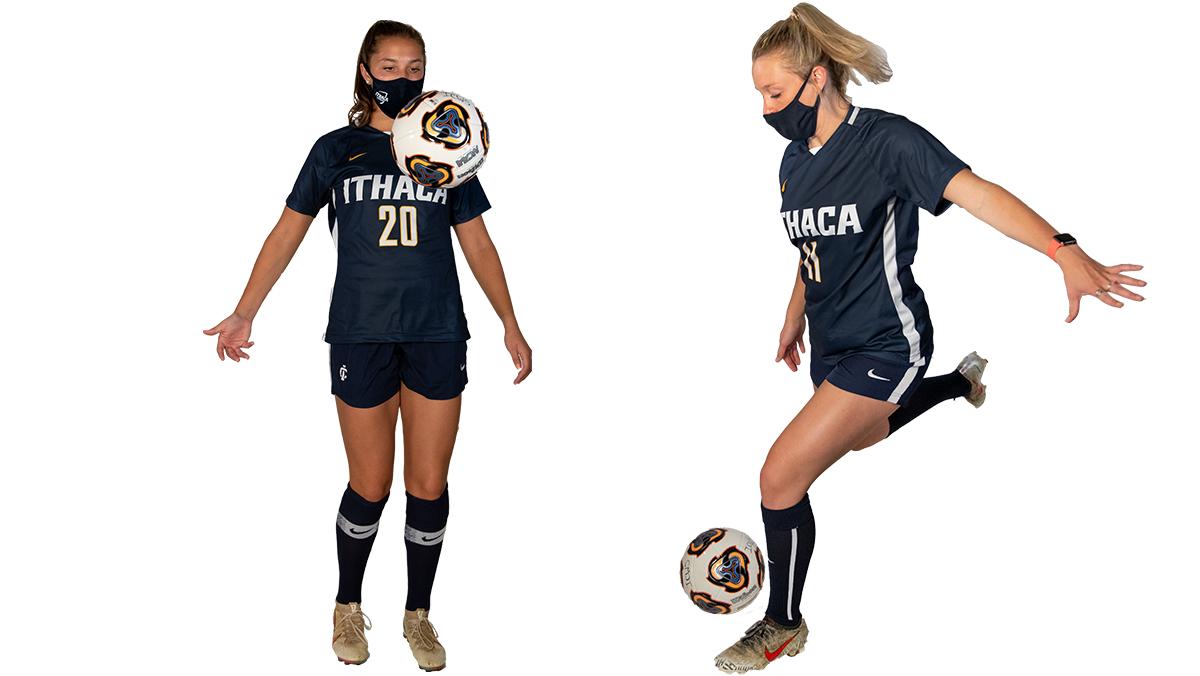 Eleanor Kay/The Ithacan
Senior Megan O'Reilly and junior Delaney Rutan are eager to get back out on the pitch and contend for a Liberty League title.
By Connor Glunt — Sports editor
Published: August 26, 2021

With its 2021 regular season approaching, the Ithaca College women’s soccer team is looking to hit the ground running right out of the gate.

“We don’t have any room for error here, we really have to make sure we’re doing what we need to do each session,” Quigg said. “Our mantra is ‘every play, every day’. If we’re in the moment every day, we’re going to get better every day. We need to have our chemistry smooth and peaking at the right time at the highest level we can in the Liberty League and into the National Tournament.”

The team’s roster will look much different in comparison to its last appearance due to the cancellation of the 2020 season. However, junior Delaney Rutan said this is not necessarily a bad thing, because everyone on the team has shown a commitment to improving their game.

“We’re not the same team we were last year,” Rutan said. “We’re new, and so is every other team. We’re going to treat every game the same and go in there with the most energy we’ve ever had and show everybody what we have.”

The team’s shortened preseason started Aug. 16 with meetings and practices to prepare everyone for the season that is approaching quickly. Senior Megan O’Reilly said the team’s energy is high, and the players are eager to get back out on the field.

“We’re all pumped to have a normal season,” O’Reilly said. “We’ve been working really hard since last spring and over the summer just to be sure that we’re ready to hit the ball rolling. We got bigger, faster and stronger this past spring, so we’re excited to see what we have this year.”

The Bombers were able to practice and scrimmage against SUNY Cortland and Rochester Institute of Technology last spring and got to see what the sophomores would be able to bring to the table. However, without a fall season, O’Reilly said the sophomores are finally going to get their first real season and become closer with the team.

“A big part of our team is teaching the culture and making sure that we are trusting the process and putting our all in pushing each other every single day to be better,” O’Reilly said. “We really appreciate all of the opportunities we get to be out on the field… it’s just always so fun doing what we love together.”

The squad is looking to return to its form from 2018 when it went 14-2-4 overall and had a brief run in the NCAA Tournament. With only 16 days between the start of the preseason and the Bombers’ first match, practices must go smoothly to start the season strong. Regardless of how the team plays, Rutan said that nobody can get hung up on one game.

“Making it to [the NCAA Tournament] would be the ultimate success,” Rutan said. “We’re each going to have our successful moments. It’s not always the score at the end of the game, but more like if you gave it your all. There’s going to be teams that are better than us, so as long as you give it your all, I think that’s successful.”

After missing out on a full regular season, Quigg said she wants her team to be prepared for every game. With the entire Liberty League canceling its fall season in 2020, the playing field between all the teams is even. Quigg said it is important for the Bombers to be focused and ready for the entire season.

“Every game is huge, every game is circled [on the calendar], and every game is important,” Quigg said. “We’re really excited about every opportunity we have in front of us.”

With a new-look roster and returning team members who have been working to improve since their last game, Quigg said she may experiment with how she deploys certain players.

“Two years is a lot of time, so people’s roles do change,” Quigg said. “I think our tempo of play will be faster. [We’re] really working on making sure we’re playing together on and off the ball both offensively and defensively, and really putting together collaborative effort from top to bottom.”

The Bombers will kick off their regular season against Elmira College on Sep. 1 at home on Carp Wood Field.