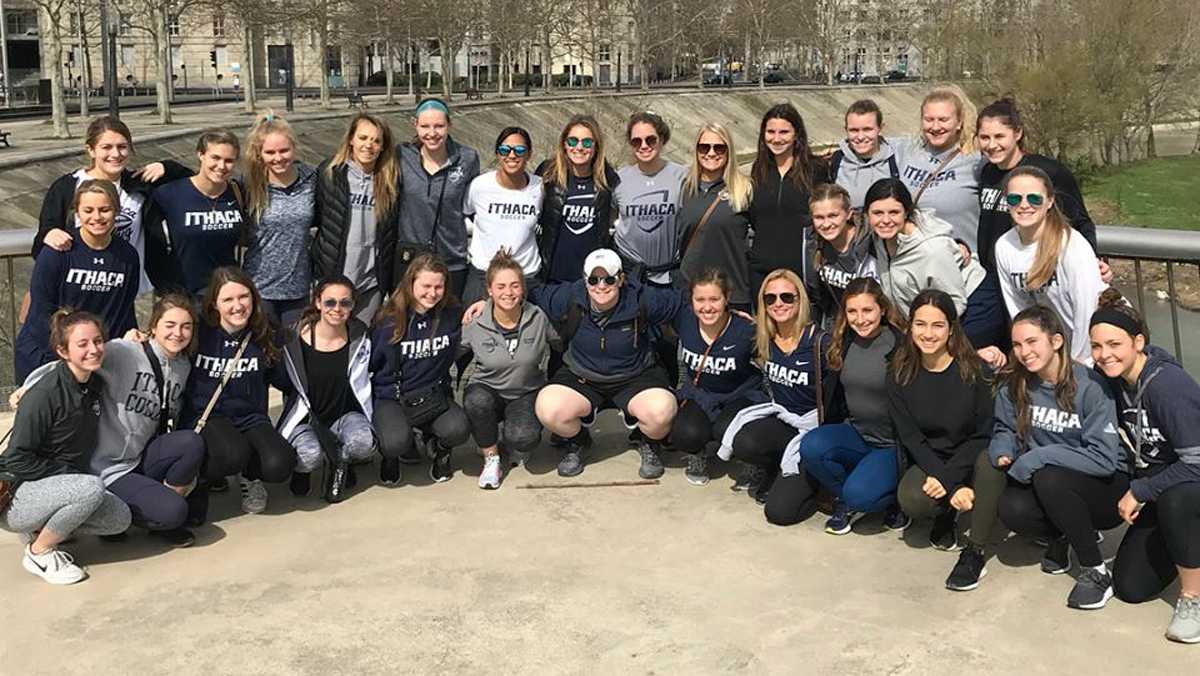 Courtesy of Ithaca College women's soccer
The team gets ready for its match against the University of Montpellier during the trip to Montpellier, France, over spring break.
By Matt Hornick — Sports Editor
Published: March 21, 2018

Every year, many of Ithaca College’s spring teams travel far from Ithaca for their spring break trips but usually stay in the United States. But the women’s soccer team’s spring break destinations have included Seville, Spain; Buenos Aires, Argentina; and Costa Rica. This year, the team traveled to Montpellier, France, and Barcelona, Spain.

Head coach Mindy Quigg takes her teams on international trips during the college’s spring break every three to four years to play soccer and to learn about other parts of the world.

“It’s an opportunity to see the world, have a bonding experience, get our women in an environment that’s different than what they are used to so they are getting out of their comfort zones and exchange with other people through a love of soccer,” Quigg said.

The destination is different for each trip, with this year’s being Montpellier and Barcelona. Quigg said she chose these locations because of the upcoming Women’s World Cup, which will be played in France during the summer of 2019. One of the first stops the team made was to Allianz Riviera Stadium, one of the venues that will host matches during the World Cup.

The team also visited the National Sport Museum, the Pont du Gard and the Sagrada Familia, along with many other destinations throughout the two countries.

Quigg said the playing style they encountered was not what her team normally competes against in the United States.

“The teams were all very technical, controlled and less physical,” Quigg said. “It was fun for us to play against because when you play against teams that are technical and controlled, it allows you to play on that level and not be on guard for contact at all times.”

Senior back Kendall Cirella said she appreciated playing against a different style of soccer.

“Their main objective is keeping the ball on the pitch,” Cirella said. “Very rarely will they play a ball over the top or a long ball. It was really fun to play against them because they were so fast with their feet and moved the ball so well.”

After the match against the University of Montpellier, the two teams had a social, where the players and coaches had the opportunity to meet one another and learn from their experiences. Quigg said it was one of the more important experiences on the trip.

“I really enjoyed speaking with their coaching staff,” Quigg said. “It was really cool to see our women interact with this other team of women that are the same age as them and going through the same things as them, just in a different country.”

Junior midfielder Shoshana Bedrosian said soccer served as a strong unifying quality when meeting players from the other teams.

“Meeting other female soccer players was so exciting because we could bond over the one thing that’s shaped all of our lives,” Bedrosian said. “With soccer predominantly being a male-represented sport in the media, it was so incredible meeting other women who had a love for the same game as you.”

The team also had the opportunity to participate in a training session with two coaches from RCD Espanyol, a team in Spain’s premier men’s soccer league, La Liga. Quigg said seeing someone else coach the team taught her about her players.

“They were teaching very similar concepts to what we teach all the time but in a different light,” Quigg said. “And the women looked at it differently because it was coming from two Spanish coaches.”

Quigg said each trip requires years of fundraising so that the majority of each player’s travel expenses are covered, but they still have to pay for a portion of the trip. The players raise the majority of the money by running soccer clinics, which Quigg said serve many purposes.

“Clinics are a huge fundraiser for us,” Quigg said. “We get to recruit, and people get to come and see the college. And all of the proceeds go directly to our trip.”

Quigg said she wants these trips to help her players learn about themselves and their teammates both inside and outside of soccer.

Senior back Caroline Matos said the trip brought her closer to her teammates.

“Being on a team of 30-plus women, it’s sometimes hard to bond with everyone,” Matos said. “However, this trip allowed many of the women to reach out to players they don’t normally hang out with on a regular basis.”

Despite her competitive soccer career being over, Cirella said going on this trip will leave a lasting impact on her.

“This trip is definitely something that will stick with me for my whole future, soccer or not,” Cirella said. “Going forward, if I do end up playing again, I definitely will think about how technical these girls were. And it will make me want to make my touch better and take what I learned in the training session and apply it to my game.”