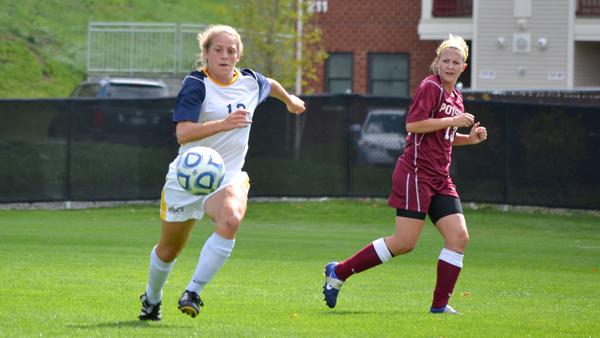 After assisting on three scores in the women’s soccer team’s first five games, senior forward Julie Winn introduced herself to the goal column in a big way Saturday afternoon.

Winn, who matched a career high with five points on the day, sent two shots past SUNY-Potsdam goalkeeper Jamie Durant, and the 12th-ranked Bombers remained undefeated in a 5-0 shutout against the visiting Bears on Carp Wood Field.

Winn’s goals were both unassisted. Her first goal came in the 29th minute after catching a rebound from freshman midfielder Kelsey King’s shot. In the 60th minute, Winn made the most of a penalty kick opportunity and increased the lead to 3-0.

After the game, Winn said the Bears didn’t provide a lot of pressure to the ball compared to other teams.

“I had more time to look around, take a look at the field and find open space if I had to, so I could find my open teammates,” she said.

Three goalkeepers combined in the shutout effort for the Blue and Gold. Senior Becca Salant only needed to make one save in 71 minutes of play. Freshman Beth Coppolecchia and junior Becca Lewis combined to play the remaining 19 minutes in net.

Despite being shut out, Potsdam Head Coach Mark Misiak was complimentary about the South Hill squad’s effort. He was satisfied with getting his players to match up with a nationally ranked team.

“They’re well coached and organized, and they have a group of players who, on any given day, they can break any team down,” Misiak said.

The Bombers, now with a record of 6–0, will head back to the Carp Wood pitch Wednesday to face rival SUNY-Cortland. The Blue and Gold beat Cortland last fall to advance to the NCAA Final Four. Head Coach Mindy Quigg said she brought in a former player to help her team focus on Saturday’s contest against Potsdam, and to avoid looking too far ahead.

“They got some advice from Andi Roach [’12], a former player of ours,” Quigg said. “She pulled the juniors and seniors aside and said, ‘I know you guys are thinking about Cortland, but keep your focus on today and make sure we get better today.’”