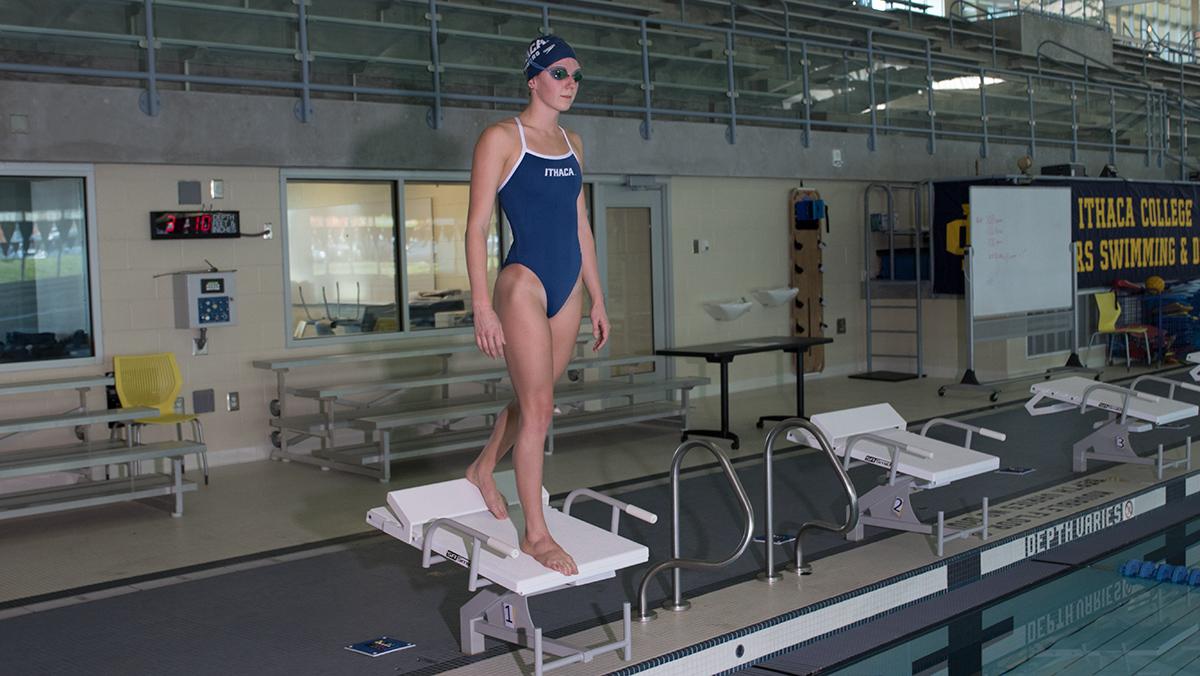 For the past three years, the Ithaca College women’s swimming and diving team has stood at the top of the podium at the state championship. This season, led by a large senior class, the Bombers are hoping to bring home the title for the fourth straight year.

Senior captain Brenna Dowd said this is their biggest goal of the season.

“We’ve won for the past three years, so the senior class, especially, really wants to strive for that four in a row,” Dowd said.

During the fall semester last year, seven of the top Bomber swimmers were abroad. This, head coach Paula Miller said, made it difficult to keep a consistent lineup.

Now that all but one upperclassman are back from studying abroad, they are taking on a bigger leadership role within the team. Assistant coach Dan MacQuarrie said having an equal number of freshmen and seniors is beneficial to the team.

Along with the championship, Dowd said the team has set a goal to go undefeated during dual–meet season and send multiple swim team and diving team members to nationals. Last year, the team had an 11–3 record from its dual meets but lost to Rensselaer Polytechnic Institute twice.

Last year, junior divers Anna Belson and Katie Helly both qualified individually for the NCAA National Championship. However, with Belson currently abroad this semester, they will be relying on Helly, as well as junior divers Lindsey Suddaby and Alyssa Wishart. They are also celebrating the return of senior Nickie Griesemer, who qualified for nationals during her freshman and sophomore seasons but did not compete last year.

Helly said their goals are not just something that is talked about. They have a plan to meet their expectations and put their plans into action.

“We’re really pushing the limits,” Helly said. “Our focus is bigger and better than last year.”

MacQuarrie said it is going to take a team effort to achieve their goal of sending a team to nationals.

“The best way to send as many people possible is obviously individually but also as relays,” MacQuarrie said. “We’re looking at a lot of the seniors right now to put together relays that are going to get us top 10 in the nation in relay.”

Dowd said the swimmers and divers attribute much of their success to their coaches. With the addition of two assistant coaches last year, the 2015–16 season was a big adjustment period, but now, Dowd said, they’re more settled and familiar with the team.

“We owe it all to the coaches to keep us positive,” Dowd said. “They work us hard, but we need it. They know that our team does best when we’re having fun but also working as hard as we can, and they understand that dynamic. Them understanding and being hardworking but fun individuals themselves helps and rubs off on the team.”

Miller said to be successful, the drive and motivation have to come from the athletes themselves, and with this team, they do.

“It’s not just coming from us; in fact, it can’t. It has to come from the team as far as wanting to be successful,” Miller said. “They’re internally motivated, both individually and as a team unit. It makes it much easier to coach when they want to do well. They want to be here, and they want to excel.”

Sophomore student-athlete hurdles over her fear of diving