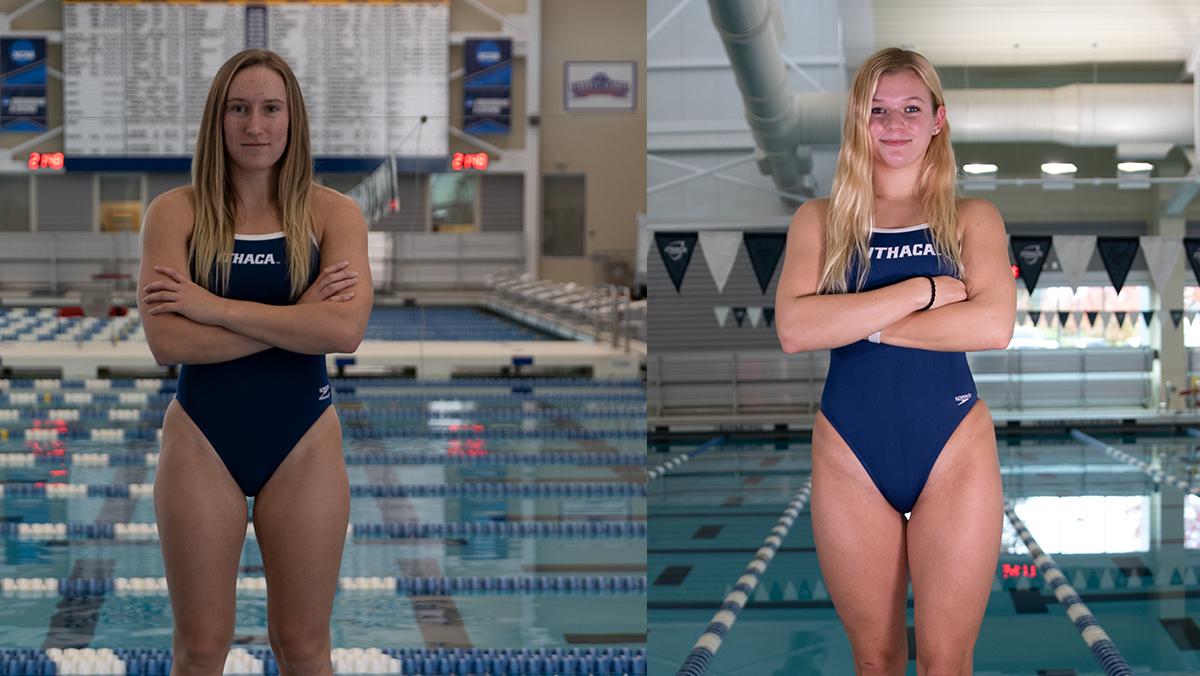 The Ithaca College women’s swimming and diving team has begun its first full season in nearly two years with a determined, new-looking roster. This year’s group has its sights set on continuing the program’s long-standing tradition of success in the midst of a transition to a new coaching staff.

The coach began his new role last year, but this will be his first full season at the helm for the women’s team because the 2020–21 campaign was canceled as a result of the COVID-19 pandemic. The team trained and competed in three non-official meets last spring, but Markwardt said it was difficult for the team to operate while navigating the pandemic.

This season, the team has returned to its traditional training routine with full-team workouts. The men’s and women’s teams are now also training at the same time, which junior Emily VanderSleen believes has helped build the team culture.

“It feels more similar to my freshman year when we were normal before COVID,” Vandersleen said. “I think there’s definitely different aspects now that the teams are combined, more unity on the pool deck [and] cheering for everyone. We lost the separation that we used to have, and I think that’s great for the team. We’ve all kind of come together.”

This return to the team’s typical routine has helped the group stay prepared to compete for the upcoming season. The team is also gearing up for the campaign by reimplementing “dryland workouts,” which consist of lifting weights and conditioning drills.

Graduate student diver Ava Lowell said she has enjoyed returning to the squad’s normal workout regimen, which she believes will translate to success in the pool.

“We’ve been able to have more normal practices, and we’re able to lift this year and have our dryland workouts,” Lowell said. “We’re definitely more physically prepared just from the standpoint of being able to do all of the things that we used to be able to on campus.”

The last time the team competed on campus, the program posted an impressive 12-0 record while finishing first in the Liberty League Championships. The team was then unable to compete in the NCAA Division III Swimming and Diving Championship because it was canceled due to the pandemic.

Since this illustrious campaign, Miller has departed as the head coach and the roster has decreased from 39 to 31 members. Markwardt said that while he believes this year’s group has the potential to reach success similar to years past, its lack of depth will present obstacles for this team.

“I think the challenge for us as the coaching staff is to get them to understand how much of a challenge it’s going to be to maintain the kind of success they’ve had,” Markwardt said. “The talent is there. We’re a little thinner than we’ve been numbers wise, but if we don’t get a full team effort, all the way down through, it’s not going to happen.”

Assistant coach Mike Blakely-Armitage echoed a similar sentiment saying the team will rely on a variety of contributors to achieve its goals this season.

“All of the people that are entered in an event are going to contribute to the team’s success,” Blakely-Armitage said. “Whereas, I think in the past, they really looked at like maybe 10 to 12 people that really carry the load. And now, it really will be that whole team effort. It’ll be like 18 to 20 athletes that are going to carry it.”

The squad will turn to junior captains Emily Shorb and Erin Kiley to help lead the way on a team that includes eight freshmen. Blakely-Armitage said he is looking forward to what freshmen swimmers Ava Palfreyman and Abigail Ignagni bring to the table, as the team’s decreased roster will require a variety of swimmers to make contributions.

Markwardt said he is also expecting impact performances from veterans like VanderSleen and graduate student Morgan Hoffman-Smith. The graduate student has been a key contributor to the Bombers’ success over her three seasons with the program. She took home a victory in the 500 freestyle at the Liberty League Championship in 2020, by posting a 5:08.69 time.

The team expects to be returning a strong group of divers as well. Chris Griffin, assistant aquatics coordinator and diving coach said that he believes Lowell and juniors Abby Marraccino, Karalyn Pawcio, Eliana Wallock and Rachel Lange will be integral parts of the team’s success this season. Lowell and Wallock have both earned CSAA Scholar All-American honors during their time on South Hill.

Lowell said she is looking forward to building off her previous success as she enters her final collegiate season.

“I’m definitely approaching it slightly differently,” Lowell said. “Just in the sense that I’m really trying to enjoy this last season and really work more on perfecting my performance, rather than looking to get new skills and push for the future. It’s more of a rounding out of what I already can do.”

The women’s swimming and diving team opened the 2021 campaign with a pair of victories in its tri-meet against Buffalo State and The College at Brockport on Oct. 16 at the Kelsey Partridge Bird Natatorium. She said the team is eager to once again reach the top of the Liberty League standings and compete in the postseason.

“We’re really coming to see if we can defend our Liberty League Championship title for a third time this season,” Lowell said. “And over on the diving, we’re really looking to see how many of those top slots at Liberty Leagues we can take.”