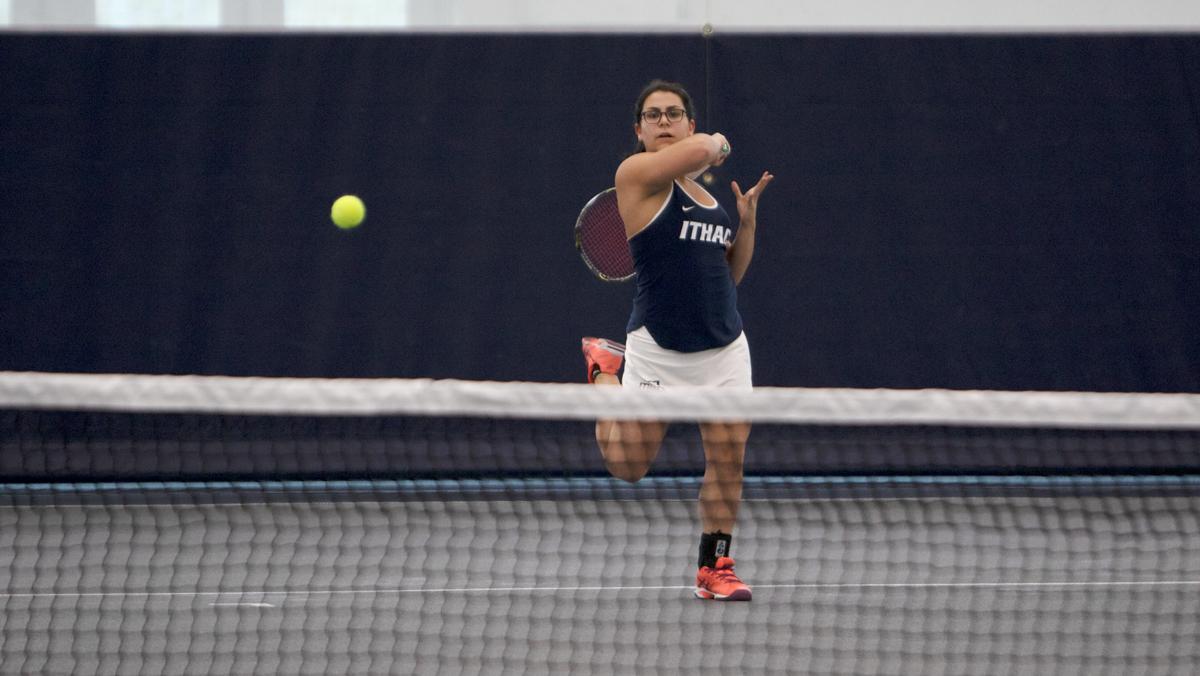 While many spring sports teams at Ithaca College are finalizing rosters for the start of their seasons, the women’s tennis team is putting its whole focus on staying healthy, as one injury could end the season.

There are currently six players on the team, an amount which is the minimum allowed by the NCAA. This is because there are a total of six singles games per match, along with three doubles games. Anything less than that would result in not having enough players to complete a match.

While having the minimum amount of players is not ideal, it is not an insurmountable issue. Last season, the Bombers had only eight players for the majority of the season after a rotator cuff injury to then-sophomore Jane Alkhazov ended her season in February. Now healthy, Alkhazov said that avoiding injury is her main concern.

“I want to stay healthy this season,” Alkhazov said. “I feel like I don’t want to let the team down and not allowing us to finish the season.”

Senior captain Kathryn Shaffer said because the small roster did not affect them that much last season, she doesn’t see it affecting them this season either.

“We have a really small roster again this year,” Shaffer said. “It definitely makes things hard, as we are trying to avoid injury and really take care of everybody. We’re not really strangers to that at this point, and we managed last year. So, we should be able to manage again this year.”

The Bombers had a down season last year and finished with a 4–11 record. This marked the first time since the 2004–05 season that the Bombers finished below 0.500. 2017–18 was also the Blue and Gold’s first season in the Liberty League. They had won 13 straight Empire 8 Championships before the switch. Shaffer said despite the difficulties the team faced in the Liberty League, the players are happy they are playing against higher competition.

“I really think we have to take it match by match,” Shaffer said. “The Empire 8 was really easy; There wasn’t a lot of competition. I really enjoy playing in the Liberty League; I’d rather be challenged than just winning really easy matches and not feeling like I was improving at all.”

“We want to try to keep everyone healthy,” Austin said. “We have a pretty good balance with Kathryn and Caroline as the seniors, Bri and Jane as our juniors, Sara is a sophomore and Rel is a freshman. There’s a lot that they are learning with each other and that’s the type of balance you hope for.”

Klein is the lone freshman player on the team. Alkhazov said Klein’s attitude toward training has stood out, and she has already seen improvement in Klein’s game.

“She didn’t know where to fit in at first,” Alkhazov said. “She was feeling it out, but she’s been putting in so much extra work — she’s going to private lessons and she’s changing her mindset. I’m happy to see that everything she was doing in the fall is translating now into preseason and then the spring.”

To combat the small roster, the team has focused on conditioning. Shaffer said the difference between winning and losing a match can come down to whoever is in better shape, and with such a small team, being in better physical shape is the key to having success.

“We have been doing a lot of conditioning and fitness,” Shaffer said. “Sometimes when skills fail you, and you are having a bad day, if you have good fitness as a base, it can help you outlast your opponent because you are faster and stronger.”

“We always like to play outside, but it’s a little difficult in February,” Austin said. “The great aspect of Glazer is that the surface here is slower so it allows work on good point construction. There are some indoor facilities where the surface is so fast that you are working more on power, and you don’t play that many matches on surfaces like that.”

Shaffer said even though the reality that this will be her final season of collegiate tennis is slowly settling in, she is looking forward to seeing what the team will accomplish.

“It’s very exciting,” Shaffer said. “I have been playing tennis for a while now, so it’s kind of interesting to think that this is my last time that I will really be competing. I’m definitely looking forward to it and hope we have a really successful season.”