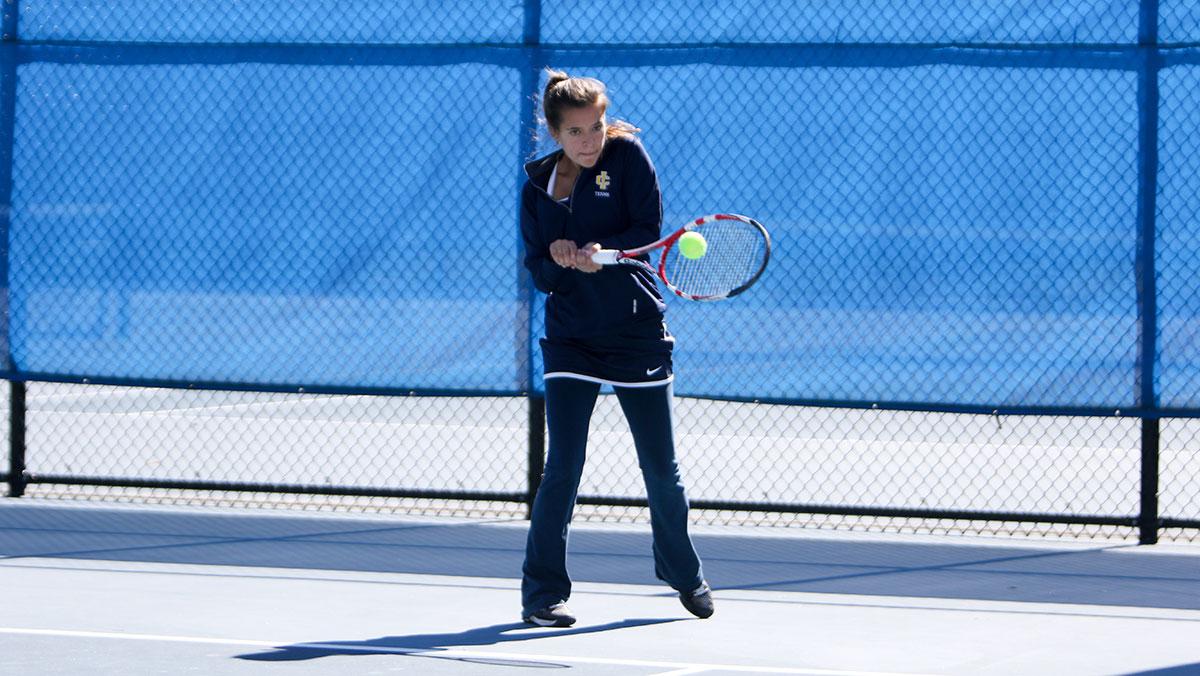 The women’s tennis team took home first place in the Empire 8 tournament on Oct. 17 and Oct. 18 to secure its 11th straight championship title at the Mendon Racquet Club in Rochester, New York.

On Oct. 17, the top-seeded Bombers began with a 9–0 win over Hartwick College in the semifinal round.

The Blue and Gold were equally dominant in their singles performances. Lair made quick work of Natoli with a 6–0, 6–0 win, and Kusak was also unfazed by Rice, who she bested 6–1, 6–1.  Dunn beat Napolitano 6–0, 6–2, while Blumenthal won against Van Allsburg 8–2. Ginster bested O’Brien 8–0, and junior Jodi Grosberg defeated Hartwick’s Kelli Ryan 6–3, 6–3 to complete the sweep.

On Oct. 18, the South Hill squad took on Stevens Institute of Technology in the championship round and won 5–1 due to three matches not finishing.

Kusak and Lair continued their doubles success with an 8–3 win over Alexis Connor and Julia Guignard. Dunn and Ginster also won their championship doubles match 8–2 against Sydney Zoretic and Katrina Guido. Blumenthal and Greenspan fell to Stevens’ Jill Hadwen and Victoria Piskarev in a close 9–8 match, which was only the second individual match that the squad has lost all year.

Only half of the singles matches were completed, and all three of them were won by the Bombers. The top two starters for the Bombers, Kusak and Lair, won their matches 6–2, 6–0 and 6–2, 6–2, respectively, defeating the same two players they beat in doubles together in Connor and Guignard. Blumenthal quickly beat Hadwen 6–0, 6–0 to cap off the Blue and Gold’s victory.

Kusak, who was named tournament MVP, said her team’s drive was the key to its success.

“What impressed me the most was our intensity,” Kusak said. “It is often easy to let your guard down when you become confident in your ability to win. Stevens fought hard, so I was happy to see that we maintained our confidence and remained calm throughout each point.”

The Bombers’ conference championship earns them a spot in the NCAA Division III tournament.