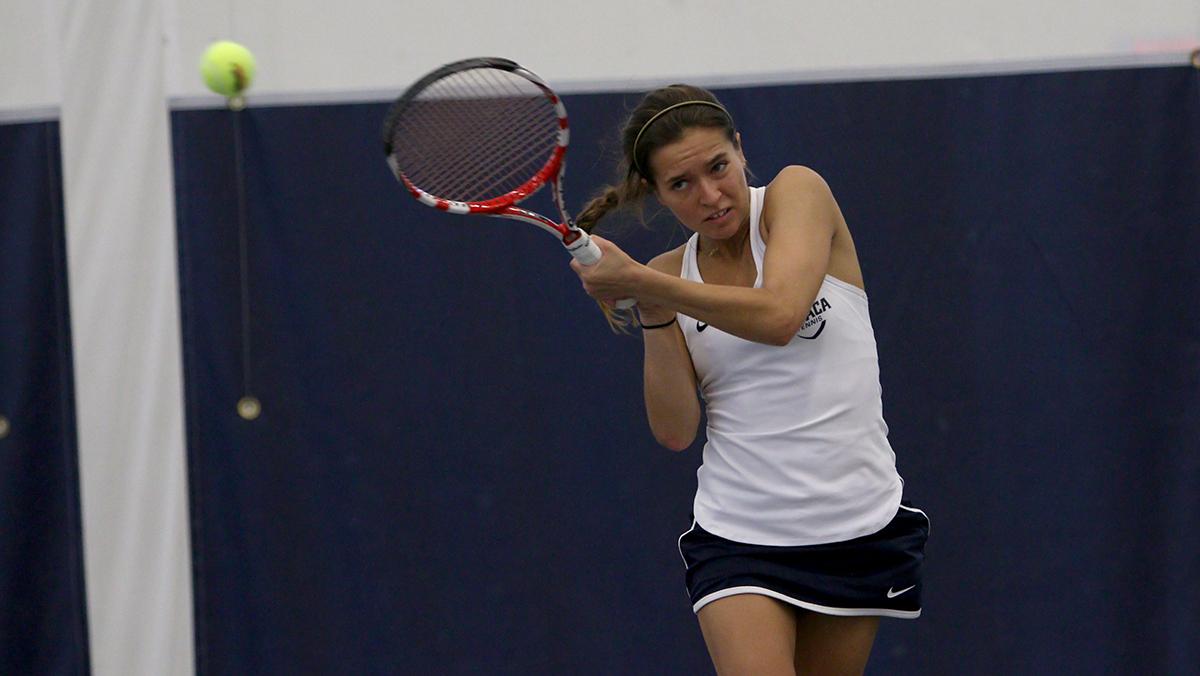 CAITIE IHRIG/THE ITHACAN
Senior Haley Kusak finishing her swing as she hits the ball to the other side of the court in the tennis team's loss to Rochester 9–0.
By Annette Hogan — Staff Writer
Published: April 4, 2017

The Ithaca College women’s tennis team faced the University of Rochester but could not hold on to their non-conference win streak. The Bombers were defeated by the Yellowjackets 9–0. Ithaca falls to 13–4 overall as Rochester improves to 9–4 overall.

The match began with doubles play, but the Bombers were unable to capture a victory. Second and third flights, freshman Brianna Ruback and senior Jodi Grosberg and sophomore Taylor Ginestro and sophomore Hannah Kasoff, fell 8–2 and 8–1. Ruback and Grosberg were bested by Alex Wolkoff and Abbey Reinhart while Ginestro and Kasoff fell to freshman pair, Sravya Gudipudi and Bianca Dyer of Rochester.

“A lot of [matches] could have gone either way,” Grosberg said. “I think that if we have that same attitude in the next match and fight as hard as we did today, we have a better chance at winning the next one.”

First flight tandem senior Haley Kusak and sophomore Caroline Dunn put up the toughest fight for the Bombers’ doubles. Kusak and Dunn were defeated by senior Lauren Zickar and sophomore Camila Garcia of the Yellowjackets, 8–6.

Singles play from the South Hill squad also came up short on the day.

Head coach Bill Austin said, “A lot of the singles were some of the best tennis we’ve had.”

Dunn put up a fight in third flight singles in the first set against the Yellowjackets’ Wolkoff but could not convert on the second set falling to Wolkoff 7–6, 6–1.

The toughest fought match of the day was between Kusak and Garcia in first flight singles. Kusak battled in a three-set match where Garcia came out on top. Kusak took the first set 7–5, but Garcia turned the score around and took the second set also 7–5. Unfortunately, the first set wasn’t enough to keep Kusak going. She fell in the last set 10–3.

Ruback and Grosberg also put up a good fight for the Blue and Gold.

Ruback battled at second flight singles against Rochester’s Gudipudi. Ruback had a strong fight in the first set, but it was not enough to finish the match on top. Ruback fell to Gudipudi 7–5, 6–2.

Grosberg fell to Zickar 6–2 in the first set and had a close fought second set, falling 6–4.

“Going forward there’s a lot of positives,” Austin said. “[Rochester’s] a good team, they’re flat out a good team. My hat’s off to them, they played well.”

The Bombers gear up for their next match at 11 a.m. April 8 in Ewing, New Jersey where they face The College of New Jersey.