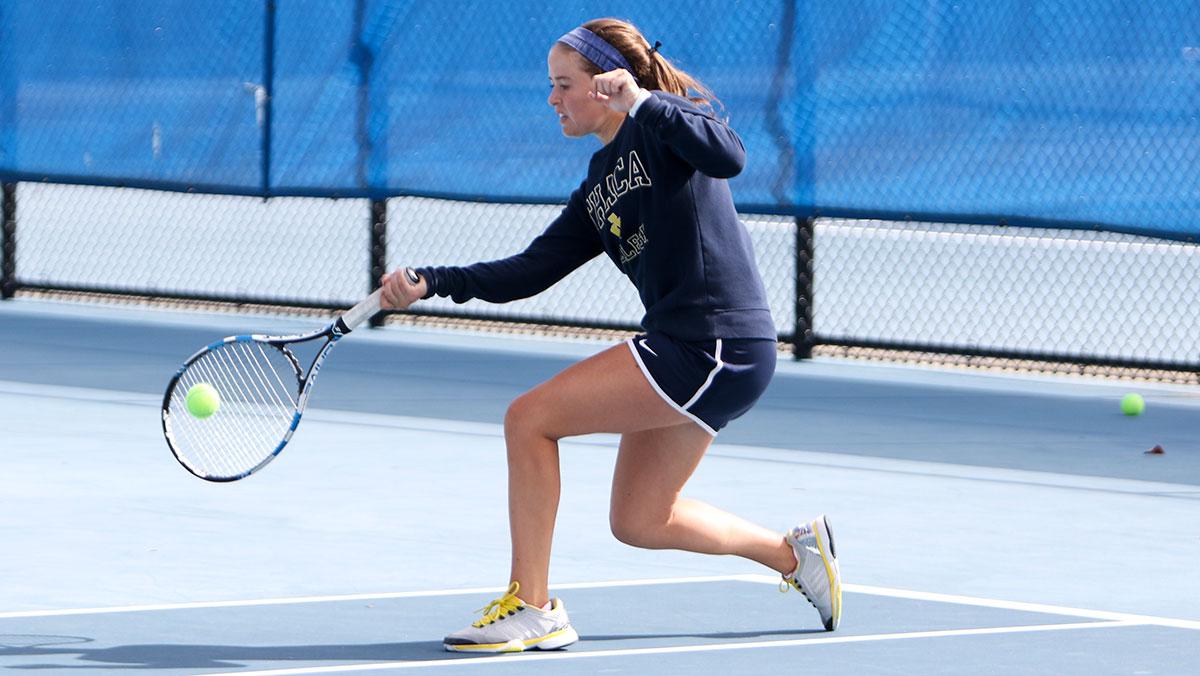 In a season of relative change — with the addition of eight freshmen and a new assistant coach — the women’s tennis team has still managed to thrive. Coming off its 10th straight Empire 8 Championship, the Bombers are 9–0 overall on the season. One reason for the Bombers’ success is the influx of young talent, including the addition of highly touted freshman McKinleigh Lair to the squad.

Lair has already seen success on the court. In the newcomer’s first singles match, she won 6–2, 6–0.

“I just wasn’t used to the singles competition,” Lair said. “I’m definitely looking to improve my play from that first match. I think I was nervous, but I’ve kind of gotten the nerves out of my system. In the future in singles matches I’ll progress from there.”

Assistant coach Jordon Smith said Lair’s transition to the college game has been a smooth one.

“She plays with a knowledge of the game and level of maturity that you don’t often see from freshmen,” Smith said. “She takes a very serious and businesslike approach to the game in both practices and matches, and that is really nice to see from someone so new to collegiate tennis.”

Lair’s seamless transition to playing collegiate-level tennis is not surprising, though. The Tulsa, Oklahoma, native said she grew up fostering a winning attitude on and off the court. Lair said she began playing tennis at 8 years old while enrolled at the Tucker Tennis Academy in Tulsa, Oklahoma, which is one of eight United States Tennis Association high-performance regional training centers.

Matias Marin, one of Lair’s tennis coaches at TTA, said Lair’s dedication to the sport is unmatched.

“You will see her working hard at the club taking private lessons, group drills, running, gym … to be the best player she could possibly be,” Marin said.

Lair said her commitment to and passion for the game stems from her father and uncle, who also played college tennis.

Since her first match, Lair has not looked back. With junior Haley Kusak moving back to first singles, Lair was moved to second singles. The freshman has remained undefeated throughout the season, and her success has translated to doubles, too.

While a majority of her time is devoted to improving her game on the court, Lair is just as focused on academics and extracurriculars. When making the decision of where to play collegiate tennis, Lair, a documentary studies and production major, said it came down to academics. Lair said she was also looking at The University of Oklahoma. However, Lair said Oklahoma is not known for its filmmaking, so had she gone there, she would have majored in journalism.

In addition to tennis, she is currently involved with Seesaw, the multimedia portion of Buzzsaw magazine and the 4-H Urban Outreach Program at Cornell University.She is also editing documentaries for the Ithaca Area United Jewish Community and working on the Holocaust Education Project.

Lair’s interest in filmmaking has led her to a variety of multimedia projects. One project includes a story about her very own team on the imbalance of freshmen and upperclassmen. Lair said she ultimately chose the college because of the number of opportunities it provides.

“[Ithaca College] is really specialized, and I’m around a lot of people who are like-minded and enjoy doing what I want to do, which is different because during my high school experience, I was in a documentary and filmmaking class and there were eight people, and a couple of them kind of wanted to do it but I wasn’t around a peer group that was as interested as I am now,” Lair said.

Fellow freshman Caroline Dunn said she has been impressed with Lair’s effort and success on the court.

“McKinleigh has handled the college transition very well by allowing a balance between both her school work and her athletics,” Dunn said. “She is very dedicated to both and puts 110 percent into all that she does.”

Smith said he and head coach Bill Austin had an easy decision when deciding to play Lair at first and second singles, with Kusak in doubles.

“She has earned it in practice through challenge matches,” Smith said. “And we are also very comfortable with her that high in the lineup with her level of maturity.”

Marin said he is impressed by Lair’s ability to thrive both on and off the court.

“Her passion, character, determination and commitment to achieve excellence on and off the court gave her the great opportunity to be at [one of] the most prestigious film programs and continue to keep expanding and enjoying her love for the game of tennis,” Marin said.

Balancing a full course load, several extracurriculars and a varsity level sport may be tough for some, but whether it be on or off the court, Lair said she is ready and always looking to improve.

“Just improving my play under pressure is going to be the biggest thing,” Lair said.