Women’s tennis prepares for second half of season 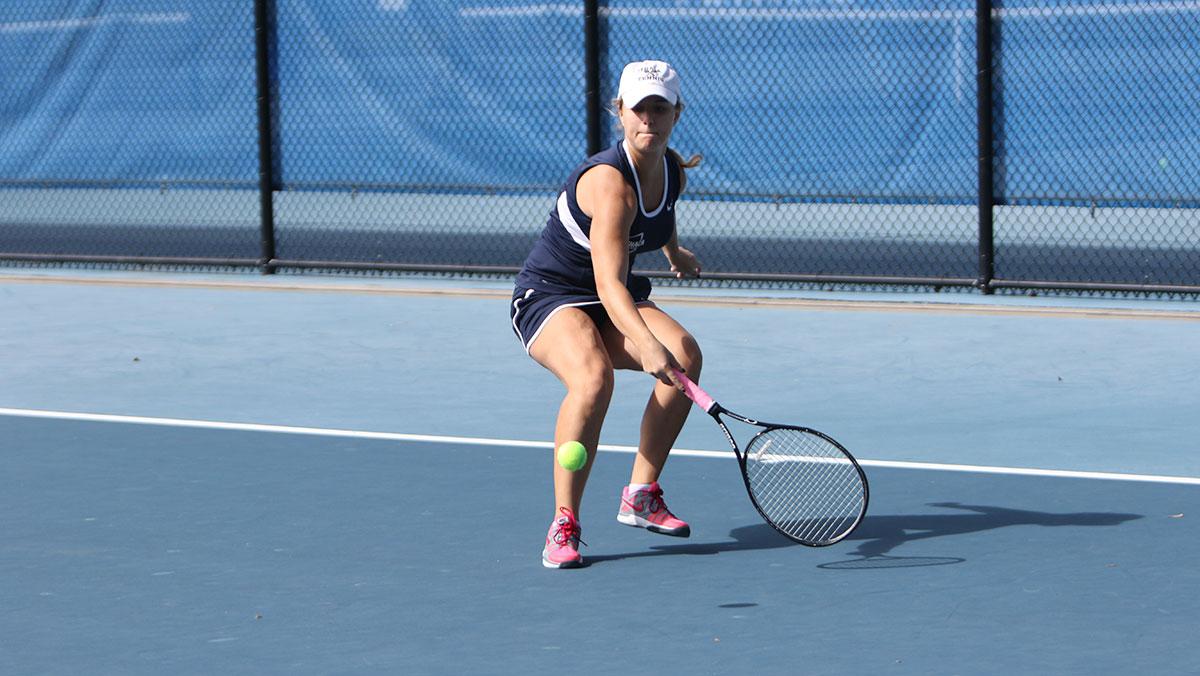 JILLIAN FLINT/THE ITHACAN
Junior Jodi Grosberg gets in position to serve the ball over the net during her singles match fall Oct. 4 at the Wheeler Tennis Courts. Grosberg won her match in two sets.
By Justin Rouzier — Staff Writer
Published: March 29, 2016

After defeating Steven’s Institute of Technology on Oct. 18 for its 11th-straight Empire 8 Championship, four months passed before the Ithaca College women’s tennis team stepped onto a court again. Unlike most teams, the women’s tennis team competes in both the fall and spring seasons. Now, the focus for the Bombers shifts to strengthening their seed in the Division III NCAA National Championships.

After finishing its fall season undefeated, the South Hill squad earned an automatic bid to Nationals, which will begin May 23 in Kalamazoo, Michigan. This 11th-straight Empire 8 Championship marks its 11th-straight trip to Nationals. In the spring, the more matches the Bombers win, the higher their ranking will be at the big dance.

Women’s tennis is considered a fall sport in the Empire 8 Conference. Most sports have their national championship tournament at the conclusion of their competition season. However, head coach Bill Austin, who is also the representative for women’s tennis in the Empire 8, said a majority of the women’s tennis teams throughout the nation compete in the spring only, and that’s why Nationals are scheduled for then.

Austin said scheduling strong competition in the spring keeps the women in shape for matches and prepares the Bombers for a National tournament run.

“Playing in the fall is an Empire 8 decision,” Austin said. “I’d like to change that, but it’s not my decision alone. However, we try to put together as strong a schedule as we can in the springtime. We do it so we can become match and tournament tough.”

The out-of-conference schedule for the Blue and Gold is much stronger than its Empire 8 fall schedule. In the fall, the Bombers cruised to victory several times, defeating teams like Nazareth College and Elmira College 9–0 without dropping a set.

This spring, they will face teams like Georgetown College and The College of New Jersey, an out-of-conference team that is ranked 12th in the Northeast, according to the NCAA Division III website.

After the Empire 8 Championship in October, the Bombers did not practice as a team until February. During their hiatus from practice, individual players were told to lift weights and do cardio training three times a week during the long layover between seasons.

Junior Maddie Overholt said the Bombers have worked hard to look past the Empire 8 Championship and to get back into championship form.

“In the fall, it’s all about coming together as a team, but the spring is different,” Overholt said.  “In the spring, we work more diligently to get back into form and begin competing.”

Instead of practicing for two hours a day like they did in the fall, the women only get an hour and a half to practice, which means to be beneficial, practice has to be efficient.

“We’ve been doing a lot more match play in practice, trying to prepare for the better competition we’ll be playing this season,” Ginster said. “It’s a different environment where I can focus on myself. The coaches get a lot more serious, and everyone ups their game.”

The Bombers will go forward this season without Empire 8 rookie of the year McKinleigh Lair. Regardless of the roster, Austin said, lineup changes are inevitable. He said what has worked in previous seasons and previous years won’t always work this time around.

“We’ve got to be ready to change and look for new possibilities,” Austin said. “You’ve got to go with what worked and see if it’s still working. Then you tweak from there.”

Junior Haley Kusak said with a young team that consists of seven freshmen, this season will give them useful experience going forward in their careers. She said that experience will give the South Hill squad a chance to make a deep run at Nationals this year and in years to come.

A successful spring season will give the Bombers momentum and drive going into Nationals, and Kusak said that would be beneficial to the team.

“Winning more matches and getting a higher ranking will definitely boost our confidence,” Kusak said. “That’s why we’re working so hard right now to get there — because when we’re at Nationals, we believe we can compete with any team.”