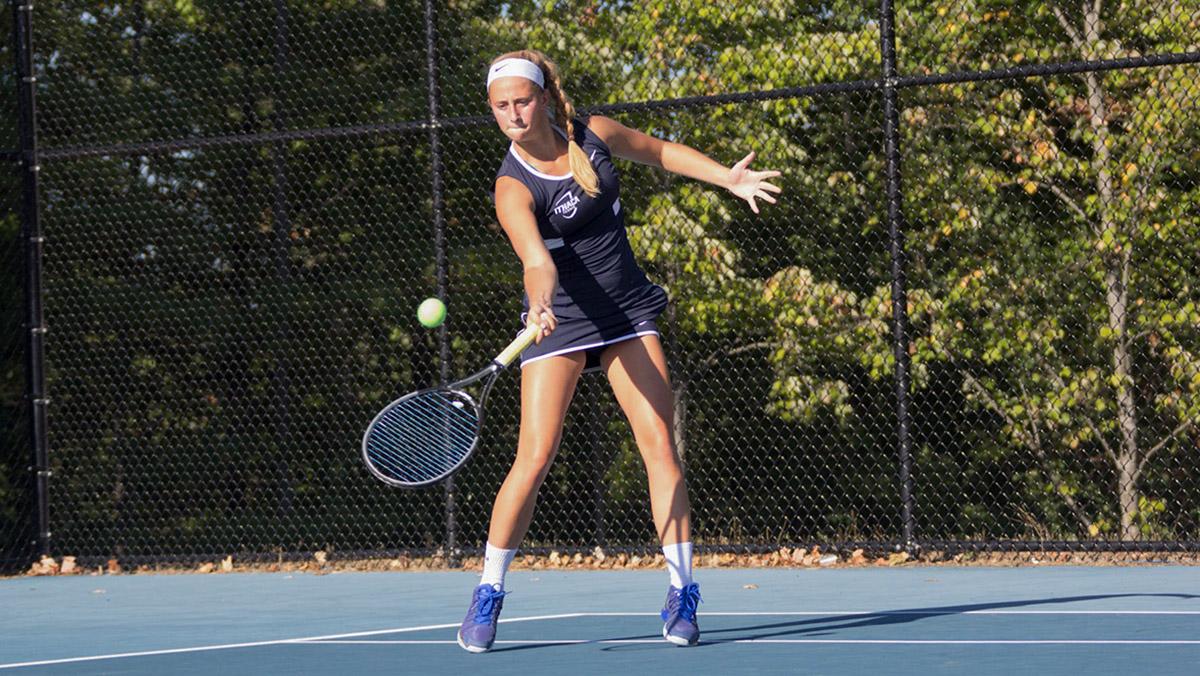 The Ithaca College women’s tennis team remains undefeated and improved to 5–0 on the season after defeating the Houghton College Highlanders 9–0 Sept. 20.

The Bombers took all three doubles matches to start the day. At first doubles, senior Haley Kusak and sophomore Caroline Dunn came out on top with an 8–2 victory.

At second doubles, sophomore Taylor Ginestro and freshman Brianna Ruback faced sophomores Tori Noller and Jacquelyn Lewis of Houghton. The Highlanders appeared to be no match for the pair of Bombers as they eased pasted the duo 8–0.

Strong doubles play for the Bombers led the momentum for the upcoming singles matches. Dunn took both sets 6–0 from Lewis of Houghton.

Dunn said the Bombers came out strong and ready to play.

“We’re playing well as a team. There is a lot of focus today, and we’re coming out to win,” she said.

With another pair of 6–0 victories for the Bombers was second singles Ruback who was head to head against Noller of Houghton College.

At first and fifth singles for Ithaca was Kusak and Shaffer up against freshman Caroline Phillips and Grippo respectively. Kusak and Shaffer helped the Bombers by both defeating their opponents 6–0 in the first game and 6–1 in the second.

Kusak said she was able to adjust her footwork from her doubles to singles matches.

“My footwork wasn’t as good starting off,” she said. “I snapped more into it and had faster feet.”

Head coach Bill Austin said the Bombers are always looking to improve as every match approaches.

“That is really our ultimate goal right now, to keep working to improve each time we have a competitive opportunity,” he said.

Up next for the women’s tennis team is the ITA Northeast Regional Championship starting at 8:30 a.m. Sept. 24–26 in Geneva, New York.