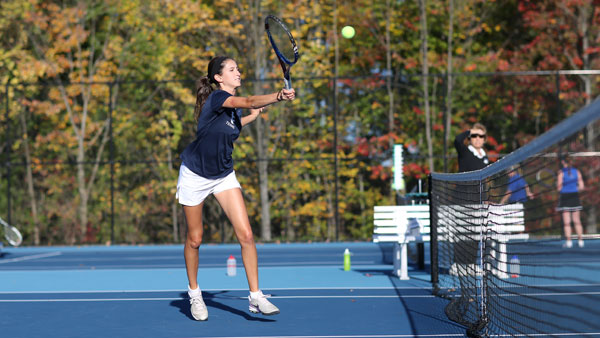 Durst Breneiser/The Ithacan
Junior Allison Vizgaitis hits the ball over the net during a game at the New York State Championships on Oct. 12 at the Wheeler Tennis Courts.
By Gilbert Guo — Contributing Writer
Published: October 24, 2013

Opponents should begin to think about marking the women’s tennis team on their calendars soon.

The South Hill squad made a splash this fall, shutting out all its Empire 8 opponents and earning its ninth consecutive conference title this past weekend. The Bombers’ 10–0 fall season marks the first undefeated fall record since 2007 when they won their third conference title in a row.

The Bombers made an early statement in their first match this season with a 9–0 shutout victory against Utica College on Aug. 30, just four days after the team’s first practice. The Bombers only lost one individual game throughout all nine matches against the Pioneers.

Graduate student Cristina Nunez has led the team with both her talent and in her role as team captain. Nunez won the A Singles flight of the 2013 Mary Hosking Invitational, hosted by William Smith College, and earned herself a trip to Florida for the Intercollegiate Tennis Association’s Small College Championships earlier this month. While Nunez has consistently won at a high level, head coach Bill Austin said the team’s depth has been key to being undefeated in the conference.

“It certainly doesn’t hurt at the top to have players like Cristina,” Austin said. “We have veterans with a mix of younger players. Everybody is working with everybody, so the level continues to climb.”

Freshman Haley Kusak leads a freshman class that both Austin and Nunez believe holds a promising future ahead. Nunez said she saw potential in the newcomers during the Houghton College match Sept. 24.

“They were playing like they’ve played every other match,” Nunez said. “It makes us feel good when we can see that type of confidence on the court.”

Freshmen Sydney Greenspan, Maddie Overholt and Chessa Mehlman all earned victories in their collegiate singles and doubles debuts when the team travelled to Houghton.

Kusak has won four singles and seven doubles matches for the Bombers at the No. 1 position this season. Her talent allows her teammates to be flexible in the rotation and play opponents with different skills levels.

Austin knows that Kusak’s playing has a domino effect on the rest of the team.

“She already is a strong player,” Austin said. “We have a deeper team now than we’ve had for a number of years.”

Nunez said one of the big focuses this year is the inter-squad competitions in practice, which help the top players sharpen their skills against their experienced teammates. The games also simulate matches for the players that don’t have as much court action.

Away from practice, Nunez and Young volunteer and spend time with teammates who want additional hitting practice.

Kusak said she believes that the transition to college tennis is smoother because of the support she gets from the captains.

“On the court, they’re always there to encourage you,” she said. “If they see you doing something wrong, they’ll tell you. We all know that this team is still pretty serious, and we have to focus to succeed.”

As the Bombers look ahead to more competitive out-of-conference competition in the spring season, this type of focus will be critical if they want to continue their dominance and make some noise in the NCAA Championships. Nunez said the team attitude is consistent no matter the opponent’s skill.

“Our motivation to win hasn’t changed, which is good,” she said. “People expect us to win. We don’t hold back against our opponents.”