Women’s track team aiming for the podium at nationals 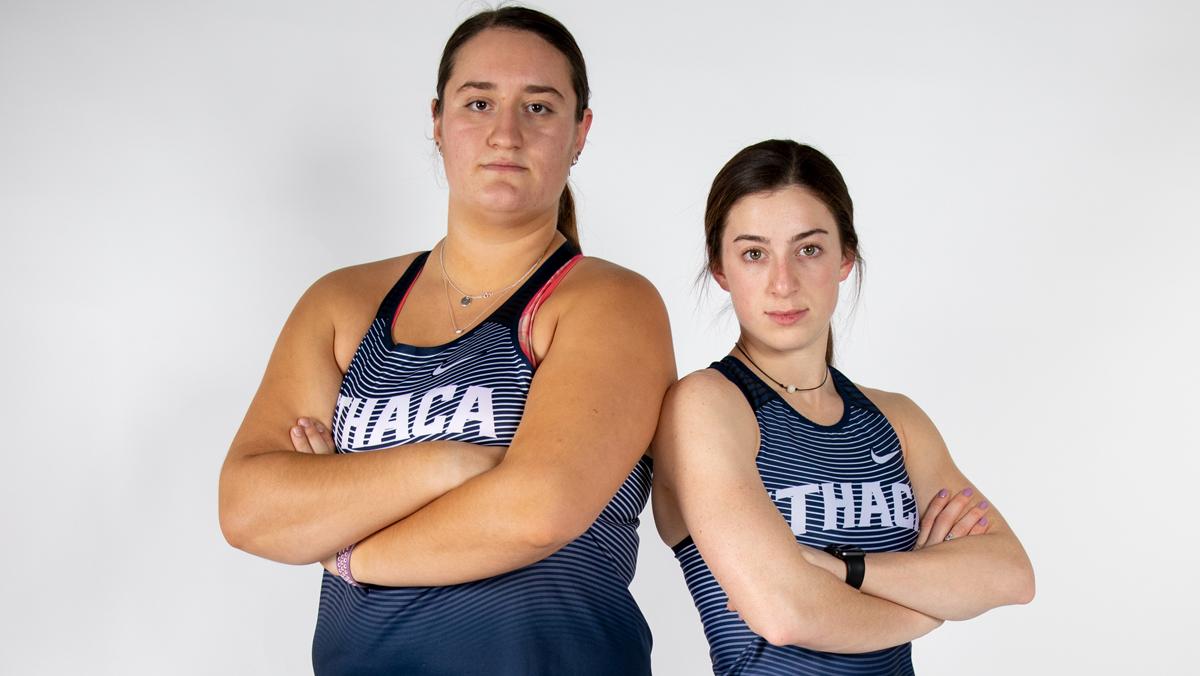 ABBEY LONDON/THE ITHACAN
From left, senior Kendall Wellauer and sophomore Logan Bruce are both currently qualified for the indoor national championship and will aim to continue their success outdoors.
By Dani Pluchinsky — Staff Writer
Published: February 27, 2020

At the 2019 Liberty League Outdoor Track and Field Championships, the Ithaca College women’s track and field team defended its conference title for the 12th time. This year, the South Hill squad is looking to claim its 13th consecutive outdoor championship.

The Bombers will have the same core group of athletes returning from the indoor season, highlighted by senior Parley Hannan. Hannan is currently No. 1 nationally in the 1-mile, 3,000-meter and 5,000-meter runs. She also anchored the distance medley team that is also ranked first in Division III. Hannan is one of six seniors on the team who are ranked in the top 50 in their respective events.

Senior Kendall Wellauer, who is currently No. 18 in the weight throw, said that having such a large and talented senior class is great for the team mentality.

“Being able to be here for all of the conference championships and switching from the Empire 8 to Liberty League put into perspective that we need to work harder to win bigger things,” Wellauer said.

Last season, the Bombers won both the Liberty League indoor and outdoor championships. Head coach Jennifer Potter said that having a strong showing in the indoor season helps the team’s mentality heading into the outdoor season.

“I think our success will help momentum, but it is still an adjustment,” Potter said. “The chemistry and the climate have been key, and our captains have done an amazing job with making sure everyone is on the same page, that they’re motivated and excited.”

One of the major differences between the indoor and outdoor season is the changes in certain events. Races like the 3,000-meter steeplechase are added outdoors, and the javelin throw, discus and hammer throw are added for throwers.

Wellauer, who was the Liberty League outdoor champion in the hammer throw, said that the transition to the outdoor events is not as difficult because they are able to start preparing at the end of the indoor season.

“We’re really lucky that our coach will transition us really well, so we’re always doing hammer drills and incorporating it,” Wellauer said. “We do throw hammer inside and towards the end of the season to start getting back into the groove of things.”

Sophomore Logan Bruce, who competes in the multi events, also has changes to adjust to in the outdoor season. In the outdoor season, her event becomes the heptathlon, which scores seven events together compared to the indoor pentathlon’s five events. She will compete in the 100-meter hurdles instead of the 60-meter hurdles, as well as adding the 200-meter run and the javelin throw to her list of events.

Bruce, who finished second in the heptathlon in last season’s outdoor championship, said that she likes competing in the outdoor because the events are more split up.

“The heptathlon is two days, not just one day,” Bruce said. “You finish with the 200 at the end [of the first day], and that makes it a little easier to eat and be prepared for outdoor because you’re preparing to run a little bit of a shorter race. I also think that having a day in between gives you time to process what you’ve done the first day, which can be good.”

Potter said that while winning a national championship is the main goal, she is also excited to see the athletes continue to improve.

“Throughout the indoor season, we’ve seen more and more people that may have not thought it was possible for them to meet their goals, and they are now realizing things are clicking,” Potter said. “It’s always fun to see the light bulbs start to go on and see how that progresses and all of those times when you’ve told people they can reach their goals, they’re finally realizing they can.”

The Bombers open up their outdoor season at the Navy Invitational on March 27 and 28, and the conference championship will be held May 21–23.