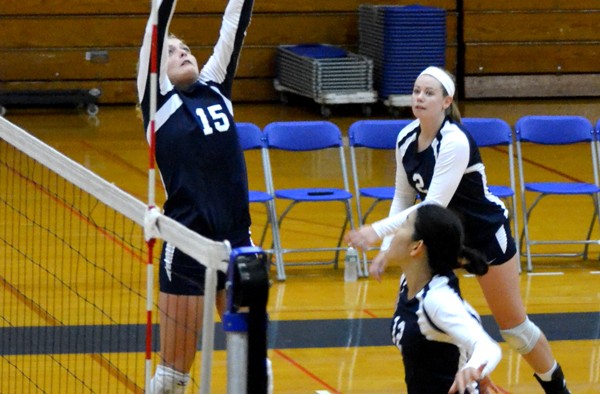 The women’s volleyball team wrapped up the season-opening Bomber Invitational on a mixed note Saturday in Ben Light Gymnasium.

The match against Baptist Bible was a hard-fought comeback win for the Blue and Gold. After winning the opening set 25-19, the Bombers fell behind early in the second and third sets.

The fourth set began in a similar fashion, with Baptist Bible racing out to an early 5-1 lead. After that, the Bombers went on to a 6-2 run to tie the set at 7, took an 8-7 lead and never relinquished it, winning 25-18. In the fifth-set tiebreaker the Bombers took the early lead, but let the Defenders come back to tie the set at 10 and 11 apiece before scoring four of the final five points. They closed out the match with a 15-12 win.

Senior outside hitter and team co-captain Marissa Weil had a career-high of 25 kills and 16 assists for the South Hill squad. Weil was named to the All-Tournament Team as one of the premier players of the weekend tournament. She praised the Bombers’ ability to come back from their deficit in the Baptist Bible match, but said the Bombers still need work in a couple areas.

“We do need to work on our communicating and not getting down on ourselves after a point,” she said.

The Bombers also received 36 assists from freshman setter/libero Carly Garone and a career-best seven blocks from sophomore middle blocker Brittany Pietrzykowski. Pietrzykowski suffered a head injury during the match and sat out the nightcap against Union.

Despite coming from behind against Baptist Bible, the Bombers were unable to get into a rhythm against the Union Dutchmen. After the two teams split the first eight points, Union surged ahead with a 21-7 run to claim the first set, 25-11. The Dutchmen took control even earlier in the second set, holding leads as large as 14-4, 20-7 and 23-8 before finally winning 25-9.

The Bombers fought back much more successfully in the third set, even managing to tie the Dutchmen at 18 apiece before Union broke away again with a 7-1 run to win the set, 25-19, and close out the match. Weil led the Bombers with eight kills while Garone had 17 assists, and freshman setter/libero Dylan Gawinski Stern had 11 digs.

Bombers Head Coach Janet Donovan said her squad’s loss was partially because of its inability to recover from Pietrzykowski’s injury.

“We did not adjust well,” she said. “The rest of our game fell apart, and that’s one thing we have to work on is making sure when we do have injuries or something crazy happens, that we play well in the areas that aren’t affected.”

However, Donovan said, she was pleased by the team’s progress from the first day of the tournament.

With the loss to Union, Ithaca’s record is now 3–1. The Bombers’ next match is at Hamilton College at 6 p.m. Tuesday in Clinton, N.Y., and their next home match is against Russell Sage College at 3 p.m. Friday in Ben Light Gymnasium as part of the Ithaca Tournament.